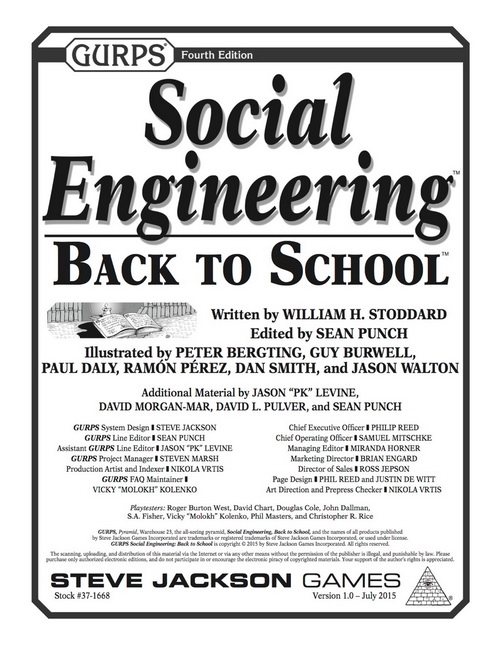 SJG published GURPS Social Engineering: Back to School not long ago. I’m a credited playtester, and one thing I can tell you about the playtest was that it was . . . lively.

I’ve not yet reread the draft since it was published, though that’s on my to-do list. The book does tackle one of the areas of the GURPS rules that causes no small amount of angst, in my experience – the 200 hours of out-of-adventuring study per character point “equivalency.”

I use “scare quotes” and I shouldn’t, because I don’t much care for scare quotes. Or air quotes. But I digress.

Still, the point of that rule is very diode-like: yes, if you go offline and bury your nose in studies for a while, you can turn that into character points. But the other way, that the only or primary method of increasing character ability is tied to a 200 hour per point metric just ain’t so.

Perhaps that view is only prevalent on the forums, but it’s one of those guidelines that seems to cause as much trouble as help.

Even so, working through the playtest draft, one of the things that came up was that at a strict 200:1 ratio, a full-time job will net you something like 10 character points per year, so (for example) someone like myself that has been working in a technical field since 2000 should have something like 150 points solely in job-related skills.

We know this isn’t the case. Even were I dividing up all that time amongst Research, Administration, Savoir-Faire (My Company), Rank, Engineering (Materials Science), and various skills that might be called Professional Skill (Engineer), there’s likely no way I’ve put that time evenly and effectively into six to twelve different skills.

More likely is that in a 2000-hour work year, perhaps 500-750 hours of real challenging work is actually done. The rest is . . . from a GURPS point of view . . . wasted time. Those meetings you sit in doing information sharing and Power Point status updates? Yeah. They don’t count. That at least takes my total down to 40-75 points or so. Likely still too high.

The real kicker is that in all of that time, you’re really looking for growth opportunities. It’s why the first five years at a job are the most interesting and important, as you’re often exposed to the widest variety of opportunties to actually experience something new. I’d considered basing the time-to-learn progression on the Size and Speed/Range table in the past. What follows was a loosely-formed idea of taking a different route – one that I remember was used in RuneQuest.

Roll to see if you don’t learn nothin’

So . . .back to GURPS. What can we do to the metagame equivalence that is off-screen learning to make things more interesting?

The “200 hours of experience” thing is no longer a 1:1 basis for exchange for character points. Instead, it’s the basis for a skill roll. You may roll for taking more or less time, using double the size/speed range progression, but treating less time as a bonus, not a penalty (you’ll see why soon). So 150 hours is +2, 100 hours is +4, 50 hours is +8, etc.

After studying for X time, make a skill roll. If you MAKE the roll, everything you’ve encountered in the last X hours has been within your current realm of experience. You gain nothing from that time, and don’t bank it for anything, that time is lost, etc.

This is basically the RuneQuest mechanic.

If you fail the roll, you’ve encountered something new, and with a second roll – a Will roll, perhaps – you may be able to leverage this challenge into learning, and gain a point in the skill.

Using two separate rolls here is one way to go. Another would be to look at the relative skill level of Will compared to other quantities, or heck, just making a Will-based skill roll instead of two rolls. That being said, hopefully the frequency of rolling is low enough that burning two rolls here isn’t terribly onerous.

Intensive training or routine job work would also modify the roll. I didn’t flesh this out at the time.

Here are several purposes to this concept

Even if you’re defaulting to a skill level of 6, spending only 20 hours gives you a bonus (remember, you’re looking to fail the roll) of +12, or an effective Skill-18. Odds are, you need to study long enough 30 hours instead of 20 to bring that down to at least a roll vs. Skill-16 before you even have a small chance of finding something learnable in that little time.

Overall, I think this mechanic – or something like it[1] – would achieve several goals that might be desirable in a time-to-character points metasystem.

On the other hand, I didn’t really playtest this or throw scenarios at it. Things would likely need to be adjusted to make them work just right, and “just right” may well be campaign dependent. But it seemed like a neat little concept, which had been exercised in at least one other RPG, that would take the focus off of clock-punching by adding elements of risk to the learning process.

[1] Instead of “you fail a skill roll,” which is a bit opposite the usual GURPSy way of doing things, you might borrow from Divine Favor and invoke some sort of reaction roll instead, with better and better reactions giving benefits.