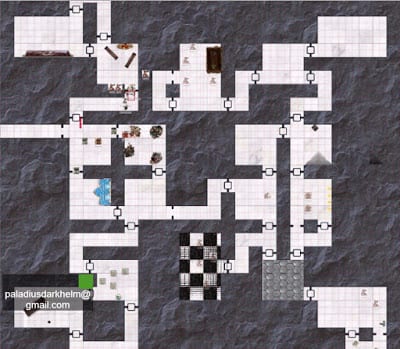 Used +Roll20 to run my test playtest, and it was my first time to do this as GM.

It took me about 3-4 hours to generate a random dungeon using the donjon generator, edit the monsters so that they were thematically more unified (all from the very useful list of Hill Monsters from the DMG or Monster Manual), and then populate it.

As far as I can tell, the best way to do this is to completely generate a fully populated character sheet for each type of NPC or boss monster. Then, to create faceless minions, you duplicate the templates over and over. If you don’t do that, you wind up having to edit each critter.

I was not able to make Dynamic Lighting and reveals work. That was just time pressure. 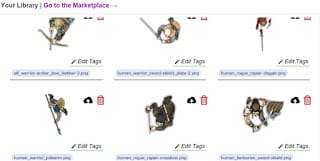 I was able to use the map layer and GM layer effectively to add color to each room, and the library of free tokens in Roll20 is extensive enough to really make dungeons pop. I also bought six new sets of tokens from +Devin Night in addition to his 20 free sets. I mean, if you’re doing tokens, you need his stuff, and it’s worth paying him, because excellence deserves your support.

One thing I was not able to do was to automate the attacks. The player sheet has very easy tabular entry for attacks. The GM sheet has a more generic set of Actions, which are –  I think – macro driven. The available documentation deliberately assumes that if you’re the GM you’re already an expert, and isn’t much help (seriously: do it that way, but just put an example in there).

I think you can just put a line like “Scimitar” for the name, or “Slash with Scimitar,” and then maybe some text for description, and a macro for effect. I think.
+Samuel Penn noted that a simple simple attack macro might be something like: /as “@{selected|token_name}” swings his morning star hitting AC [[d20  @{BAB}+@{str}+@{selected|bar3}+ 1]], doing [[1d6 +@{str}]] damage

That’s cool, and would help.

I could always use PC sheets for the bad guys, I guess.