The term “Armor as Dice” was coined somewhere on the GURPS forums to describe a method of treating armor using (oddly enough) dice instead of points of DR. It was a bit of parallel evolution – while I wasn’t the only one to come up with the phrase, I was using it in games as early as October 2004.

I expanded on the concept, which is pretty much what it says on the tin, in my short article “Armor Revisited,” from Pyramid #3/34: Alternate GURPS.

The way I do this in my games featuring guns is that I convert armor to dice of resistance, at 3.5 points per die. Armor gets the benefit of the doubt (that is, a remainder of 1.5 becomes 2) but you have to earn each full die. Meaning that 12pts of damage becomes 3d+1.5 = 3d+2 protection, while 13pts id 3d+3, rather than 4d-1, because that extra die can be very important.

You then just subract armor from firearm damage and roll the remainder. For hard armor, this works great. So a 5d bullet hits a 4d metal plate (that would have been DR 14, or about 5.1mm of RHA steel), and what punches through is 1d of wounding.

To be very clear: you subtract armor dice from damage dice. You don’t roll until after you’ve done this, and that is an injury roll, which is then modified for bullet size, hit location wound modifiers, etc.

For flexible ballistic armor that lacks stuff like shear-thickening fluids in them, the bullet tends to either go right through with hardly any slowdown, or get totally stopped. For this type of armor, a special rule: if the attack average damage is more than the armor DR – higher dice of damage than armor DR dice – you subtract one point of damage per die of armor.

So a 5d bullet hits a 3d+2 (DR 12) flexible armor vest. Damage is not 2d-2 like it would be for hard armor, but 5d-3. Ouch. This is the way kevlar works in reality, and if you look up the NIJ threat levels as presented in GURPS Cops, and convert them to dice, you match reality very well.

This means if you overmatch a flexible vest by even just a little you will overwhelm it and do a lot ofdamage. If you have a 3d-1 bullet (average damage 9.5) vs a 2d+2 kevlar vest (average protection 9), it only gets 2pts of protection (2d is 2pts), and net damage is 3d-3.

Great, so you should always do this?

Probably not. While this works quite well and improves verisimilitude for bullets (and actually helps speed of play in most instances), for hand-to-hand combat in fantasy realms it doesn’t work so well as described. Firstly, the strength and power of a hand-delivered blow can be quite variable, while the energy delivered by a gunshot is usually within a few percent of the average for each time (at least out of the muzzle).

Not only is the damage from a melee blow pretty variable, armor can be variably thick. Not only “can be,” but at least for late-stage plate, nearly always was. That could be leveraged in interesting ways (roll 2d+1 for damage, but armor is 3+1d6!) if you want to do such a thing, but now you’re getting into complexity for the sake of it.

Of course, the fact that every bullet leaves the muzzle with roughly the same energy (I’ve heard about 10-15% in energy, which is 5-7% in velocity, and probably even tighter for match-grade ammo), that doesn’t mean all strikes are created equal.
A bullet can hit a thin part of the armor (penetrating more easily, effectively hitting a “chink”). This is best 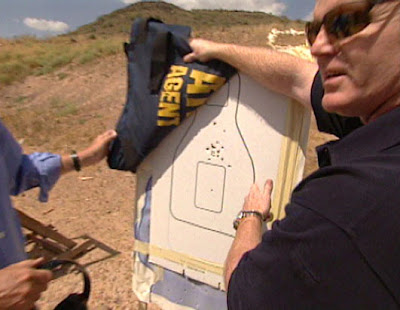 represented by a called shot (“I shoot his armpit!” or “I aim for the side panels of the vest”) where DR is halved at the usual huge penalty (something like -8) or a critical hit that has the same result.
More likely is that the bullet has the right constant amount of energy, but hits at a bad angle. That will effectively lower penetration.

And if you get variable penetration and variable thickness armor, well, you might as well roll damage anyway, right?

Keep it Simple, Keep it Safe

Armor as Dice was created to reduce the penetration variability of weapons – usually guns – that should be 100% stopped by a given piece of armor, but punch through because of the potential 70% higher damage that can be rolled compared to average penetration. Since GURPS armor values are in fact set at average penetration (DR 70 = 2d = 1″ RHA steel), this provides too much oomph to projectiles.

So if you’re going to do this, just subtract armor dice from damage dice, and roll the remainder as injury.

Again, as in the article, it would be reasonable to make gunshots partly fixed and partly variable, to account for just such things. DR as either numbers or dice would work in that case, since you’re rolling anyway, but dice to dice or numbers to numbers make for faster comparisons.

I periodically mention that I’m going to start a game here at some point, likely something like a GURPS: X-Com or Monster Hunters style game that will basically be Dungeon Fantasy but with guns. Or maybe swords and guns. Or sword guns.
Yeah, I’ve got to get one of those.
I would definitely be using the Armor as Dice rule for the guns. It really does make things easier for me to track. I would, however, also only use dice for DR7+, while DR1-6 would just be . . . DR 1-6. Hand-to-hand damage would always be rolled as well, providing no change for most melee combats (and by extension, most fantasy games, especially if rescaling damage to better accord with the firearms scale).
I might do that too. Might not. Once you get into 300-400 points of pure awesome, realism goes out the window, and if you’ve got stones big enough to close to hand-to-hand distance with a sword, you deserve the damage boost.