Sort of in response to another thread on the forums. But this time, I’m wondering if I can use my favorite thing in the whole GURPS world to answer a question about scaling DR with tech level.


At 5 points per level, DR is fairly expensive. It’s 1.6x more than Fatigue Points and 2.5x more expensive than HP, and half the cost of ST. If we take the baseline for the cost of this trait as generically fair, then it takes 17.5 points to be protected vs each die of damage. So for 18 points you are immune to the average barehand thrust damage for a ST 14 warrior, and for 35 points you’re immune to swing damage of 2d. Thus to be protected from typical pistols is going to be in the 35-50 point range, and over 100 points to shrug off a rifle.

That’s a lot of points. Probably too many, since diminishing returns should set in somewhere.

Diminishing Returns or by Tech Level?

Diminishing returns brings up a good point. While I started with “scale it by Tech Level,” it might be better just to bend the cost curve. Let’s see . . .

Scaling by Tech Level assumes that you’ll be bending the curve by the average or typical threat a PC is likely to face. Maybe 1d-3d at TL3, 3d-8d at TL8, and reaching for blasters and such, something like 12d-18d at TL10, including the effects of armor divisor. A quick scatterplot shows that, well, shucks, the scaling for a power law seems to go at the 1.45 power of Tech Level, which means scaling protection by the Size and Speed Range table (which goes as the sixth root of 10, or 1.468) will give pretty decent results. If we assume DR cost is scaled for the value of a TL3 world, then you can multiply the effect of DR by how many steps up the S/SR table you go, at roughly x2 per 2TLs. Note that the offset for paying 35 points for DR 50 at TL8 is an Improved Assault Vest and SAPI inserts, which provide DR 47 to the torso front and rear for $3,600 and 26 lbs. So it’s basically 35 points to have, all the time, what you can have if you can buy the stuff and carry the weight. 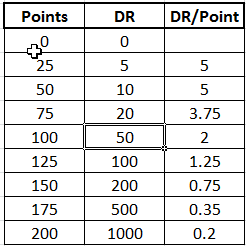 The other way to go here would be to forget TL and just say that, much like ST in a way, once you have more than enough, the marginal value of more is zero.

T-Bone has the best suggestion for pricing ST I’ve seen. Applying that philosophy to DR would make some sense. The ST progression works out great, and provides a great diminishing returns once you get out of human norm.

Well, there is no human norm for DR, and direct conversions with Thomas’ table won’t really work . . . but if we say that each 25 points is 2 steps up the Size and Speed/Range Table, we get something like a decent progression, where the cost of DR is 5 points per level up to DR 10, and then each 25 points takes you two steps up the S/SR progression, or 150 points per x10, which not coincidentally is half the increment for the ST table in T-Bones’ rules.

The two options to not produce equivalent results. DR 1000 at TL8 (285d+2) using TL scaling is about 700 points, while DR 1000 using diminishing returns is only 200 points. That being said, against an AP attack such as DU, that’s 6dx15 (3) or perhaps even more importantly, about 6dx5 (10), which is not out of line for a shoulder-fired ATGM at TL8 (see GURPS High-Tech, p. 148 for some examples). If people are known to be that tough, tough weapons will be deployed against them.

The same 200 points of ST will buy ST 50 using those rules, while 700 points will purchase about ST 2,000. Relative to DR 1,000 the 700-point cost for ST and DR might balance “better,” but really, at that point level you’re pricing against the cost of equipment.

I think ultimately, the linear cost for DR needs to somehow become diminishing as either protection scales up, TL scales up, or maybe even both. DR 1,000 at TL3 is basically untouchable without cosmic attacks or things that blow right through DR like Deathtouch (I think). DR 1,000 at TL8 means that you’re in the same class as a decent armored vehicle remembering that an M1A2 or Leopard 2A6 might well be in the neighborhood of DR 5,000 against HEAT attacks, and 2,500 against “mundane” KE attacks.

Some sort of blend, where DR gets a multiplier per point based on the TL/typical threat, but also has a diminishing returns progression, might wind up being the best. No firm judgement yet on my part – but some noodling provided at least some guidance. I”d expect 500-1000 points to be at least as good as a modern MBT, which means with “only” a 7x multiplier for TL, you still need some sort of diminishing returns to get you there.