I have an Ultimate Licence for FG. +Doug Davison  was also kind enough to accept an invitation to be interviewed on the Firing Squad a while back. As a result, sometimes he sends me stuff.

Today he sent me this, which I pass along as a dutiful marketing stooge. 🙂

(I do not get paid by, well . . . anyone for the blogging I do. Not this, not Violent Resolution, nothing.)


The 2015 Summer Sale has just launched. The dates correspond with the official Steam Summer Sale and the prices of discounted items is matched on our store (www.fantasygrounds.com) and on Steam (http://store.steampowered.com/app/252690/).

Tonight we rejoined Our Heroes in the ice caves on a far off world. +Tim Shorts couldn’t make it, so we quickly recruited +Jake Bernstein, who joined +Peter V. Dell’Orto, +Christopher R. Rice , and +Nathan Joy in the quest to kill the aliens and take their stuff. 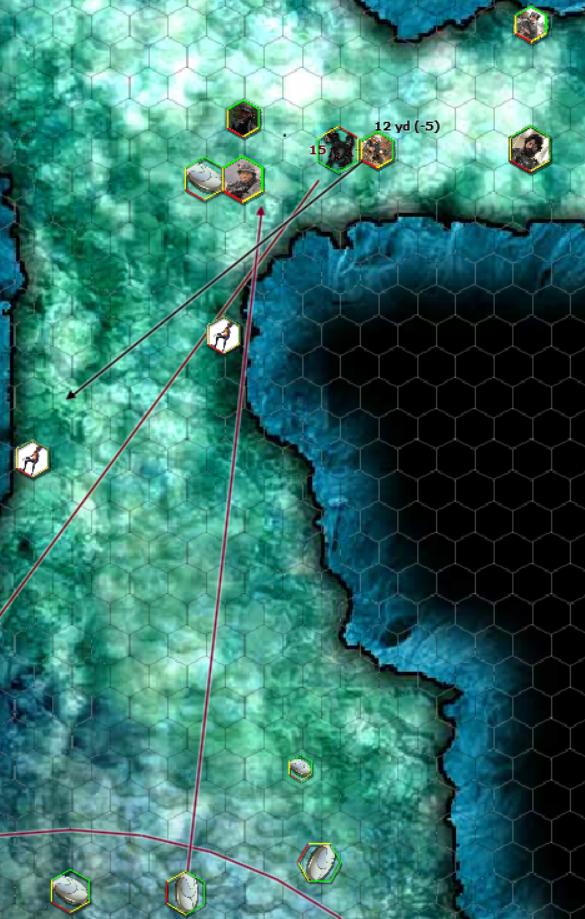 No play-by-play transcript as I usually do when I’m playing, because my mind is on the game and keeping it moving. Or trying to.

The basic play of the night was one long gun battle. We went into XCOM Time, and I thought as a GM that it worked really well. It gave each side time to do what they needed to do, and allowed us to cover a lot of in-game time in five-second chunks, which worked.

We did go back to one-second turns as soon as anyone’s Wait was triggered, so no real loss in fidelity there. Just a decent way of keeping the sides close.

They set up a brutal ambush against an enemy that is coming at them in waves. The NPC Christine Brinkman had been left as a rear guard, and manged to make an awesome Per roll, spotting the SM -4 bad guy drone a long way away. Aim, Brace, Reflex sight, and a very good Aim roll put her on target, and she totally drilled the drone. That left quite a bit of time for the team to get set, and they set up a brutal, and effective, ambush when the remaining drones came around the corner. The first two, I think, bit it hard, and the third was appropriately riddled with holes, but after putting a blaster bolt through Dragonskin armor on Jake’s character’s torso, which is 3d (5) against 10d armor (1d injury per hit). He also got nailed once on each leg, though, and that was more serious. We resolved the crippling injuries (in reality, Jake worked out the details of his own injuries while I continued play) and he’ll be off his game for 3 months!

Ianali was able to sprint over, and accept a -10 to his First Aid roll (plus some rerolls) to get him back up to 1 HP, which kept him out of the “rolling for KO each second” bad place.

After the first wave it, they set up and waited for the next wave. It came cautiously, and the drones staged their own ambush, using some Sectoids as bait. Christopher’s character Ianali tried to take one alive, carefully blowing off one leg (yowch), but then the guy with the grenade launcher opened up on the wall, pulping that guy and rendering the second, hidden next to a wall, unconscious. Three 40mm HE grenades will do a number on a small, unarmored alien worker.

As the good guys came around the corner, though, one of the floaters tagged our grenadier on the torso and arm, which burned through his armor and did some real damage. Three grenades later and two of three floaters (these were much smaller and unarmored than the disc they met coming in to the caves) were damaged but still functional, the third untouched.

Rules, Concepts, and Speed of Play

The “XCOM Time” seems to work

Fantasy Grounds lets you put down and leave range estimating lines on the map, and these are great for “cross this and my Wait triggers!” notations for laying ambushes and whatnot are great.

We’re half-using +Mark Langsdorf‘s rules on rapid fire, though I think maybe we weren’t using them as correctly as I’d like. I think that, in retrospect, the RoF bonuses using the Size and Speed/Range Table might stack up too quickly.

What I wanted was something where 3-4 shots (the usual number in “burst fire” got you your first bonus, but like Mark, I think that the SSR table is core to GURPS and should be used where possible. However, this means that with a gun with RoF 12, you are (with the RoF bonus) +4 to hit, which is just as good as Aiming using RAW with a carbine wit Acc 4. Unsighted firing at RoF 12 is simply NOT as good as aimed fire with the same rifle. So that bears more consideration. Maybe halve the values, rounding up. It will be self-limiting, as most normal rifles will be able to do this for 2 seconds and then a mag change. Peter’s character, with his 100-round drums, is better off.

I used the “always add 10 to Per rolls, but full size and range penalties apply” rule often today, and it works great. It’s how Christine was able to nail the first floater drone, and how one of those drones missed seeing a PC at a critical moment, in a believable way.


My map is too big, and I probably have too many enemies for the style of play I want to have for this campaign. This mission was designed to be one session long (notionally), two at the most, and we’ll finish in three. That means we can spend 6-8 weeks of real-world time (allowing for cancelled sessions) on what might be considered one to three firefights.


Some of the teething issues with the interface have gotten better with use. It still does suffer from some issues, though, that make for some frustrations.

I think today went pretty well, and the rules being used are working for the benefit of the game, not a distraction.
Smaller maps, perhaps fewer but more capable foes (though what’s going on now isn’t bad), and a slightly different capabilty set for my bad guys will help out.
It should be fun to finish up this mission. Of the six troopers that went in, two have been badly wounded by blaster fire, and there are still several drones active. The cave has barely been explored (and I say this because of an accidental full-frontal map reveal in a previous game; they know how big the place is).
I will give serious though to how I can guarantee we finish up next time.

I’ve been getting ready for the follow-on session to the incomplete Alien Menace starter this weekend. We had to cancel last time due to sickness, ComiCon, and general beat-down-ness.

Some things I realized:

All my baddies are placed, but I need to get their behaviors settled in my head before we start on Saturday. That just requires a bit of time.

I also need to start carrying around my Book of Pretentiousness again. I have had a few ideas slip away that shouldn’t have, and it was way better to capture them in that journal. Plus, the babes dig it.

I’m sure that once I’ve got the hang of this, it’ll be faster and easier. For now, making slow progress, but I get a lot of help, mostly from +Eric hil and +Brian Ronnle . 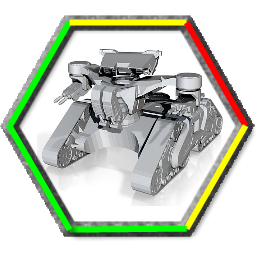 All in all, I feel kinda-sorta prepared for my first GM experience in, as Obi-Wan said ” . . . a long, long time.”
Cast of Characters

Looks like the team of six starting troopers includes:
Ethan’s a pure combatant, and maybe the best rifleman in the group (despite being 50 points less than any PC). Christine makes a good point person, and with Danger Sense and good combat skills, can lead a team. Colton and Ianali, while no slouches in a firefight, are the teams technical and medical specialists. In different ways, AB and Enrique bring the hurt – AB can carry over 115 lbs of gear before hitting medium encumbrance, which is a lot of boom-boom, while Enrique carries a weapon that does 6dx2 pi+ damage, even before he decides to get clever with fancy ammo.
I think they’ll be a capable team. They’ll need to be.

I’ve been challenged to throw my hat into the ring for the Ennies. Much like +Peter V. Dell’Orto I don’t expect to win, much less make a strong showing. But you never know, and the more exposure the better.

I figure I’ll link up one or two of the interviews, a S&W or Pathfinder post, and a GURPS post – maybe Technical Natasha.

But I’m open to suggestions. What posts will make the entry the most compelling?

In other news, my family spent a fun night last Thursday night in the ER as my daughter came down with croup, and the usual palliatives weren’t effective. She responded well to the nebulized epinephrine and oral steroid, so she’s been much better. But my wife and I are wiped out. She’s very, very pregnant and I had been up late and up early for the last week, for both work and fun. Short version: took Friday off due to necessity, took care of Short Stack, but am still wiped out.

What that meant, though, was campaign prep. Thanks to some truly epic assistance from +Eric hil, I now know exactly how to get characters, NPCs and otherwise, into FG2. Along with fog of war, importing maps, some nifty waypoint stuff for movement, and a bunch of tokens.

I’m not ready yet, but I will be. He also introduced me to making “modules” in FG, so you can just preload and go from map to map to map, like a pre-prepared adventure.

Also doing a lot with the players. +Peter V. Dell’Orto will be playing a heavy weapons guy (and likely team lead). +Christopher R. Rice is the combat medic with a penchant for two-weapon hand-to-hand fighting. +Nathan Joy is going to be a scout/sniper with an XM500 as his “Muton go away” switch. +Tim Shorts has yet to report for duty, but I also have two 225-point NPCs ready to go for fire support, and can create more (the PCs are 275 points).

Standard gear will be a modified XM8 rifle setup. But chambered in a more impressive cartridge, and I’ve chosen the 6.8×43 SPC, largely because it does exactly 6d from a 16″ carbine, and can credibly be shortened to 12-13″ while losing only 1 point.

The game’s set two decades in the future, so I can more or less do what I want/need for equipment. Chose the XM8 largely for looks, I’ll admit, but I like the overall feel, and it’s something different.

I’ve got the team kitted out in high-quality body armor, but still TL8 stuff. Improvements in gear are part of the genre.

In addition to being a FG guru, Eric is also an artist, He took my basic cavern map that I’d done, and turned it into something special. Heh.

Lastly, this campaign has caused me to jot down a few other ideas for articles. And of course Peter and I have agreed to collaborate and contribute something to an issue of the Manor, which will be my first foray into publishing something D&D-esque.