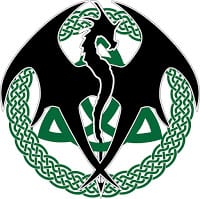 As part of the run-up to Dragon Heresy, I quickly realized that the book was going to be very large. My initial estimates of a single 250-300 page volume were crushed under the heels of 90,000 words of just monsters. And that’s after culling things down and eliminating many that are thematically inappropriate.

There are ways to deal with this, of course. One is “be even more ruthless about culling.” That’s valid. Another is to just suck it up, and publish a 550 – 600-page book, which would be even larger than the Pathfinder Core Rules (512 pages), and about the same size as Hero Fifth Edition (592 pages). Hero solved this problem in 6th edition by publishing in two volumes. This is the same tack GURPS took, releasing a Campaigns and Characters book with sequential pagination (if the Characters book stops at p. 250, the Campaigns book picks up at p. 251, in concept). Dungeons and Dragons Fifth Edition is something like 990 pages if you include every page (including the index and TOC, which isn’t entirely fair) of the Player’s Handbook, Dungeon Master’s Guide, and Monster Manual.

By that yardstick, Dragon Heresy is the very soul of brevity. 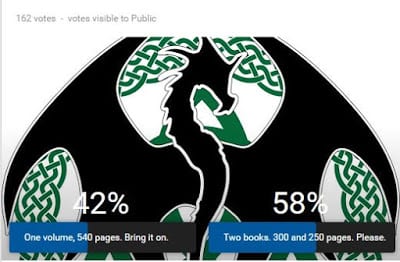 Still – I was curious as to preferences, so I posted a poll, which was very well attended by the reading population – for which everyone has my thanks (the poll is still active here).

The results were illustrative. I figured “two volumes, please” would simply dominate. I was not entirely correct.

The first swing of voting broke sharply in favor of One Giant Tome. Subsequent voting broke hard the other way.

Eventually, things settled, with roughly 3 people preferring the two-volume set for every one person that wanted a single book. The most useful piece of advice came (predictably) from +Peter V. Dell’Orto, who suggested one PDF, but two (or more) printed books, so that you could have a combat rule, a campaign rule or map, and a monster open on the table simultaneously, but do a one-volume PDF search.

Still, while from an RPG electoral college perspective, the multi-volume set won huge, 40% of the market, more or less, wants a volume they can just haul around. 60% wants multiple volumes. The reasons for both are valid.

What I am considering, but I’d have to work out the logistics of it in a big way, is a “build-a-book” concept. You select a cover, get the intro, and choose the components of the book. Book A would be the character generation and core rules. Book B would be the campaign rules and setting information. Book C is monsters and stuff. The Index would cover A, B, and C. There would be three Table of Contents files, one for A, B, and C.

Each customer could then assemble the book or books that they want. Want the One Book to Rule them All option? Assemble Cover + ToC A, B, C + Intro + Book A + Book B + Book C + Index.

Print on Demand how you like from the PDFs.

The indices and ToC would obviously be free. The cover or cover variants maybe not, because you have to pay for good art, and if I have paid for a custom awesome cover, I need to charge for the work. If it’s my current decent but not eye-bogglingly-awesome cover, it would be free as well.

I would dearly love to do this. Everyone could get what they want, and Print-on-Demand means that I would not have to deal with the logistics and costs of stocking offset print runs of anything, much less infinite combos of A, B, and C.

Based on the poll results, though, my initial offerings will likely be “one-volume PDF,” “two-volume PDF,” and “two-volume print book.” If the product is well received enough to do more, I will do more.

One reasonably-frequent observation was “if it’s that long, your editing is bad.” A less aggressive phrasing might have been “does it have to be that long?”

Yes and no. The largest sections of the book – fully half it’s length – are spells, magic items, and a gigantic section of monsters. I could easily chop the heck out of the magic items. I think I still need the 60,000 words (!!) of spells, since they’re core to at least five character classes, maybe more. The monsters could be reduced to “early challenges, a few big dogs, and if you want more monsters, make ’em yourself or buy this New Extra Volume!”

I’m loathe to do this, but it could be done.