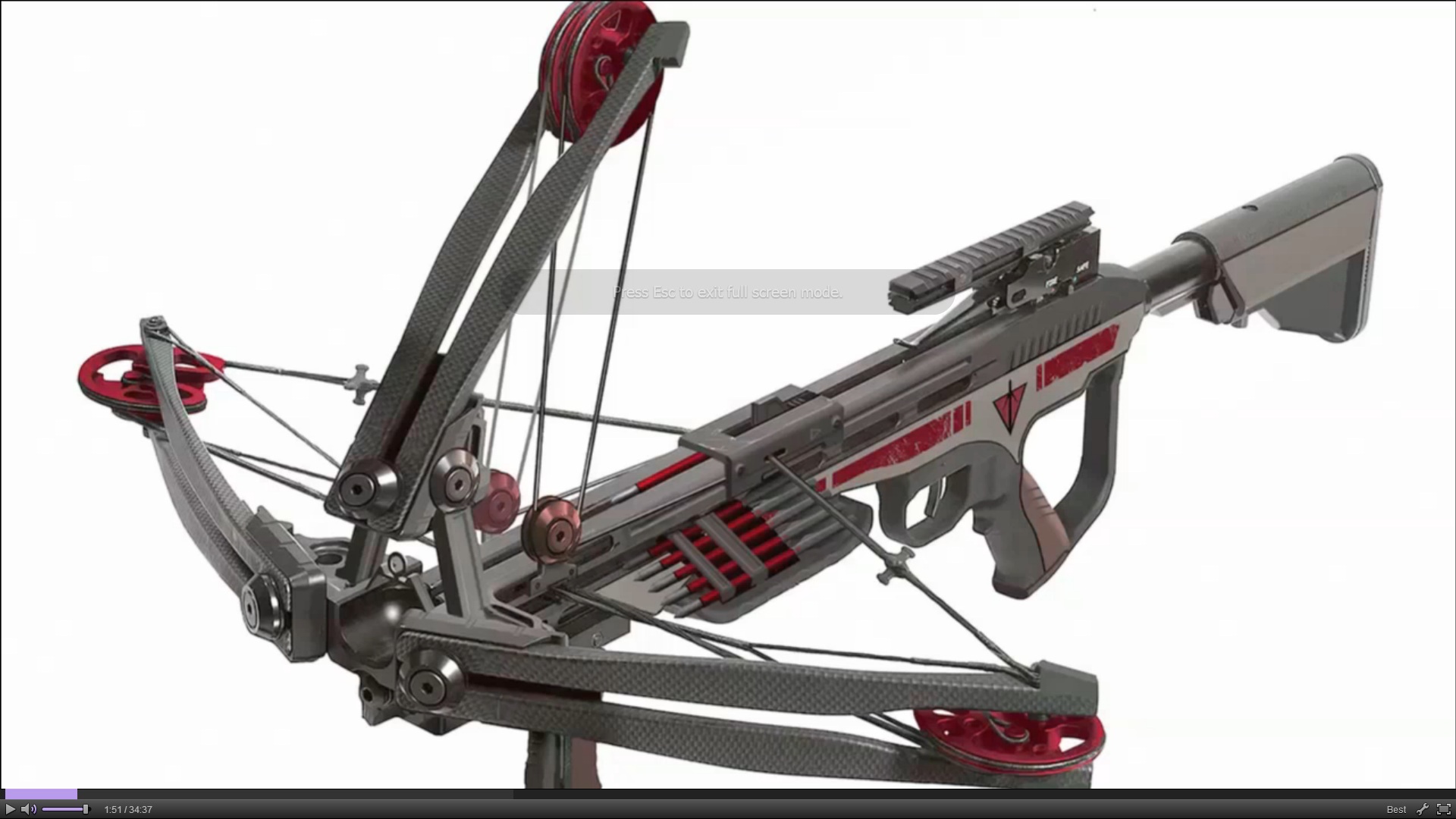 Once again, over on the forums there’s a thread. In this case, someone created a repeating crossbow that is re-loaded using a pump-action similar to a shotgun. The design on the thread was a fairly standard design, nothing quite as elaborate as the image to the right.

So, what would I make of such a beast?

Well, compared to a regular crossbow – especially one with modern materials, you’re probably still looking at a draw length on the order of 7-11″ and not too much more. Maybe you could eke out 16″. Modern crossbows have a power stroke of 9.5 to 13″ so you’re not really losing much there. Medieval crossbows were shorter strokes, mostly – the powerful ones had steel limbs that didn’t flex much, and so might be hundreds of pounds – or even thousands – with only 6-9″ of stroke.

Still, let’s say that we can neglect draw length or power stroke.

So that leaves the draw weight of the thing. How heavy could that be?

The Basic Set and Low-Tech crossbows leave quite a bit to be desired from a verisimilitude perspective. But let’s assume that the work I did in The Deadly Spring wasn’t totally bogus. That means that you can span a crossbow of up to 8xBL using two hands and bracing the thing on the ground – equivalent to a Two-Handed Lift from p. B353. This seems to be “ready the crossbow in two seconds, ready a bolt, put the bolt on the crossbow,” and shoot on the fifth turn. A bow is ready an arrow, mate the arrow to the bow and draw, shoot.

So if the lifting part is 8xBL in 2 seconds, and a bow is up to 2.5xBL in one second (slightly generous over the 2xBL from p. B353), how heavy a draw might one manage?

Certainly not 8xBL. No legs or back in use, really. Can we eke out the same 2.5xBL as a bow? Probably not. A bow can use the legs (see my longbow draw movie – it’s not great form, but it’s more than just the arms and back. You get a lot of back and shoulder in it, though.

The pump-action will brace against the shoulder, but it’s pretty much a one-handed pull with one arm, if the second hand remains in “trigger” position and you’re bracing the weapon at the shoulder the entire time. I’m inclined to say between 1xBL (seems light) and 2.5xBL (seems heavy). Let’s give it the benefit of the doubt and say between 2x and 2.5xBL.

Still, the crossbows that do thr+4 imp are the 8xBL ones. The energy you’ll get out of equivalent draw length but less force will be quite a bit less, corresponding to a damage of 50-56% of the full-power bows assuming a draw strength of 8xBL. A weapons-grade crossbow from The Basic Set that is ST 12 will do 1d+3 damage, or about 7.5 points. 55% of that is 4.1 points, or about 1d to 1d+1.

That puts at about thr+2 to thr+3 for ST 12, about where GURPS puts the pistol crossbow.

So it’s a fast-loading pistol crossbow?

That seems right to me. You’re getting the same damage output of a pistol crossbow, but occupying two hands and cutting the bow-centric reloading time from two seconds to one, and avoiding (for a number of shots equal to that of the hopper) the “ready the arrow” and “mate the arrow to the bow/ready the bow” actions.

So: stats as a Pistol Crossbow, Shots probably becomes something like 6 (reload 1 or 2/second).

Note that if you’re not using full-length projectiles, efficiency will likely be worse and it might knock the damage down to thr+1 instead of thr+2. Smaller projectiles will reload faster.

So my estimate above should probably be thr and can fire every round, but loads 2 projectiles per ready maneuver (you can probably do more with Quick-Ready or some other Technique), or thr+1 with full-sized projectiles, but defaults to one per second (again, load faster with a Technique).