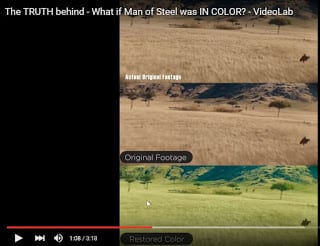 I was . . . deeply torn about Man of Steel. Henry Cavill was very convincing in the Big Blue Suit. Well, the muted blue suit, due to color palette tuning – and you really need to see The Color Version of the movie to understand how deeply it was cranked to the dingy grey. But the point is that while I found MoS a very watchable movie, I didn’t find it a terribly high-fidelity Superman movie.

Of course, one can easily say it’s not a Superman movie – after all, it’s called Man of Steel, not Superman. And that was deliberate, I think. He’s not Superman yet. He starts to get there at the end of the film, and I suspect we’ll see more and more of that through Batman vs. Superman.

So I just saw the new trailer. It confirms a lot of things that I’d seen speculated about in the past.

So let’s get started.

The first bit is some sort of gala that frames the central conflict of the film (well, one of them, probably), which is the views of Clark and Bruce regarding their respective roles.

It also features a very . . . animated?  . . . Lex Luthor. I’m not a huge Affleck fan a priori, but give the man credit – the tired-sounding “Lex . . . ” given when Luthor interacts with Clark for the first time (and the presumption that these guys (Bruce and Lex) run in the same circles? A good one – like the Batman/Superman Lego movie, where Bruce/Lex are both in the running for Man of the Year.

Anyway, Lex as ferret-on-crack is going to have to take some getting used to.

I strongly suspect that the initial conflict between our polychromatic capes will potentially be resolved in the first half of the film. We clearly have a lot going on, just between the first few trailers.

Things we can expect to see?

Superman rescuing people and being heroic

While there’s a good point to be made that Clark saves all of humanity about three times over during the course of the movie, the kind of up close and personal heroics we saw in Superman Returns (much maligned, but I like it well enough) were absent. At least once he donned the cape.

The early clips and trailers show him, at the very least, saving the crew/payload (probably crew) of a rocket launch, rescuing people from a flood, and likely other things.

Some serious issues with cult followings 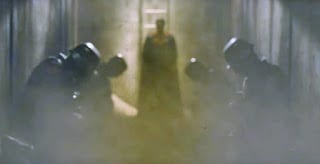 It very much looks like the initial issue between Batman and Superman will revolve around a cult following that has sprung up around the Man of Steel. Based on the initial image, complete with Nazi helmets, someone’s taken Nietzsche’s Ubermench quite literally.

Not sure where in the world it happens – we see Bruce/Batman decked out in desert gear – so it could be Africa or many places in the American Southwest (I find that particularly likely for several reasons) – but Batman thinks it enough of a problem to intervene directly.

The shots of Superman walking past kneeling . . . Nazi-menchen? Uber-Nazis? Meh. Superfans? . . . is interesting, because again it highlights that he doesn’t seem to deal with such threats one-on-one. Beneath him, maybe? Perhaps it’s like the recent episode of Supergirl: there’s no percentage to be gained by a Kryptonian twisting the arms off of a human, no matter how much he deserves it.


I’ve noted before that the clash in Metropolis and Smallville between Kal-El and Zod was akin to several events the size, scope, and nature of the September 11 attacks on the World Trade Center. One estimate I’ve seen before pegs physical damage at 750 billion and total impact at $2 trillion.

The hyping of the “Superman is an illegal alien” thing, while done for both true impact as well as a decent pun, makes no small degree of sense here. You can’t send him a bill. The damage and dead are real. There’s nothing, or at least very little, that anyone can do about him.

So there are hearings and tension between Superman and the government. If Clark maintains his “you won’t control me, but you can’t get any more American than being raised in Kansas” position, this is guaranteed to Not Go Over Well.

Certainly you’re going to have factions. And some sort of program that says “we need a way to control/deal with this guy” is going to happen.

I have to wonder if Cyborg is the US government’s answer to that, while Lex Luthor’s answer is . . .

Doomsday. Why’d it have to be Doomsday?


Yep. Confirmed, I think. He grabs Zod’s body, and creates something terrible. This will obviously be the final (and likely epic) conflict of the film.

We have also seen an image of Lex with Kryptonite  So I have to wonder if one or more of the following will occur:


The highlight reel shows Superman, Batman, and Gal Godot’s Wonder Woman facing off against a very angry, very powerful Doomsday in the final clips. But we also know that Aquaman, Cyborg, and The Flash have been cast. That’s six major heroes, some of which are almost always considered part of the founding seven of the Justice League, some not so much. The one that’s usually there is Green Lantern, and there’s a “Carrie Ferris” cast in Man of Steel (and BvS) with a highly suspicious last name

There’s absolutely no question in my mind that this is an ambitious film. It’s a Superman sequel. It introduces the entire Trinity in one film (though Wonder Woman looks to only show up in costume at the end – though more scenes could happen that we’ve not seen yet, of course). It borrows heavily from Frank Miller’s excellent The Dark Knight Returns graphic novel, including, word-for-word, one of the juicy bits of dialog from the Batman v Superman fight in that book.

We will see Superman’s role in the world and with the US government (not to mention its people) evolve. We’ll see the emergence of no fewer than six, and maybe more, heroes. We’ve got Lex Luthor. We’ve got Kryptonite. We’ve got Doomsday – and let me tell you, the decision to combine the Doomsday figure and the Dark Knight Returns and maybe some of Justice League:War (in that the good guys all band together vs. a major threat, Doomsday instead of Darkseid) all in one movie means that as much as I noted that the Supergirl pilot jumped from high point to high point with breathless pace, this movie could feel equally rushed.

But perhaps not. Certainly, it’s possible that this movie, with all the seeds of awesome liberally sprinkled throughout, will deliver its full potential. As a fan of all three of the main characters (and Green Lantern is growing on me), I certainly hope so.

And a Better Version!


Someone has already re-cut the trailer to be more suspenseful and reveal fewer plot points.

One thought on “Apropos of Nothing: Batman v Superman Trailer 2”