Rebuking and turning undead that still cling to a semblance of life is pretty much a fantasy RPG staple. It’s been part of Dungeons and Dragons since nearly the beginning – I believe Arneson added it as a foil to “Sir Fang,” and Gygax fiddled with it or dropped it in his games – there’s a nice history here at Hidden in Shadows by DH Boggs.

But this is an article about GURPS, specifically, the Dungeon Fantasy RPG, Powered by GURPS. It assimilates all of that old-school inspiration, plus more from rogue-like games and “stomp the bad guys!” games like Diablo III, and hones GURPS into a fairly high-power dungeon delving game. Characters start pretty optimized, begin at 250 points, and the social and in town aspects of the game are somewhere from “minimized” to “absent.”

It is ridiculous fun, and as I learned at GameHole Con 2018, is digestible by beginners if presented properly.

But about those clerics…

Let’s start off with as factual a description as I can bring to bear. This is important because as it turns out, I completely biffed it when it came time to run it at GameHole.

Even so: this turns it into a matter of degree rather than a binary “I win,” but some of the observations from GameHole still exist.

As a cleric with the Turning power (Adventurers, p. 21), anything “undead” and “truly evil” can be repelled by you if you Concentrate. You must win a Quick Contest of Will between yourself and each foe you might turn. This is impacted by the Rule of 16 (Exploits, p. 8). You add your Power Investiture, plus a bonus for the oomph of your holy symbol if you have one that’s +1 for blessed and +2 for High Holy. Another factor in favor of Clerical Awesomeness is that as written, Sanctity level doesn’t hinder the ability, so in an area of Low Sanctity (which is pertinent to the Hall of Judgment example), your Turning is still at full burn.

On the down side: Rule of 16 means that you’ll never roll vs higher than 16 (unless you’re very good and you foe is also very Willful), and you have to actually buy Turning, which is a 24-point opportunity cost.

It’s a 3d roll, and if your bad guys are anything but a Lich, Spectre, or Vampire (who all have Will 15 to 18, which is to say, “adventurer-class”) you’re looking at Will in the 8-10 range for our bad guys, and the distance they have to keep from Mister Cleric is going to be on the average about 6-8 yards, and that’s enough to keep the entire party more or less safe. On a good roll, say a 5 or 6, you’re looking at keeping the bad guys up to 15 yards away from you.

Part of the issue here is that Turning is pretty much designed to neutralize the impact of fodder undead, and what I’m complaining about is mostly that it does it too well. There’s also the fact that I made a few errors along the way in running it: in particular I play a lot with GURPS Powers: Divine Favor (still the best Clerical Powers system in existence). There’s a power in there called Protection from Evil which basically grants True Faith (the basis of the Turning Power), and an enhanced version gives a roll vs Will+10. So my cleric was rolling vs Will-24 to turn undead vs foes with Will-8 and Will-10.

In the end, I slapped on a -5 penalty for Low Sanctity (see above for why this is wrong), which for one of the groups made the usual roll vs Will-19; you can see, though, that for the pre-gen in question (Will-14, Power Investiture 5) that it made little net difference. Forgetting the Rule of 16 would have brought the radius in by an average of three yards.

So my errors were in magnitude but not in exists/don’t exist. Even so, I feel that the 24 points of Turning is a bit too much oomph as written. END_OF_DOCUMENT_TOKEN_TO_BE_REPLACED

Well, I survived! This was the first convention that I’d attended since my journey to GenCon 2017, as part of my first foray as being part of the con as Gaming Ballistic, LLC. I was, more importantly it turned out, also there as part of my Kickstarter rewards for backing the Dungeon Fantasy Roleplaying Game (Powered by GURPS) at the “play the game with Kromm” level.

That’s important for this journey to Madison, Wisconsin for two reasons.
1. I played through what would turn into the linear adventure Lost Hall of Tyr (for D&D5e) there for the first two times
2. I got to know the Dungeon Fantasy RPG for the first time

My mission for this Convention, then? To demonstrate and run Hall of Judgment, the first licensed adventure or supplement of any kind for the Dungeon Fantasy RPG. To talk with the SJG folks (Phil and Steve were both there) about further ideas for supporting GURPS. To get to meet in person folks like Matt Finch, Erik Tenkar, Jason Hobbs, and many others whom I’ve interacted with – and who have helped me so much – in getting my games off the launch pad. I simply could not have done what I did on Dragon Heresy and Hall of Judgment without an absolutely crucial hour or so with Zach Glazar, who pumped an incredible amount of InDesign Starter information into my head.

I also was hoping to sell a few copies of my product, which was a secondary goal but a real one. 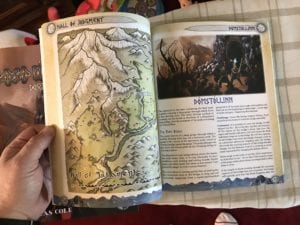 This continues the actual play report by Simone De Bellis, the first session of which was transcribed here in a prior post (mildly edited by me), and here in the GURPS North America Facebook group, which thankfully is used by folks well beyond North America.

As before, he takes what I gave him in Hall of Judgment and makes it his own. Some of the changes – such as making the thurs (a kind of fae troll-kin) into minor jotuns are pretty inspired. The other is using the natural freedom of the setting to plunk down needed resources, such as a village he needs for reasons to be revealed later, I suppose!

It’s great to see someone so obviously having fun with the material.

Read on for details! And pick up a copy today – either from Warehouse 23, or my own webstore. END_OF_DOCUMENT_TOKEN_TO_BE_REPLACED