This is in response to a quite interesting thread on Reverse Missiles. Like many things that occur at the intersection of magic and technology of any sort, there can be many answers depending on the metaphysics of how it is all supposed to work.


The key bits are

In a way, this is the easiest. Make the calculations to hit your foe, and like the old “I’m rubber you’re glue” game, whatever you shoot comes back to you.

The game mechanics are straight-forward. Roll to hit, and if you succeed, you have potentially hit yourself. More on implicatinos later.


This is where the trouble might start. The projectile or spell energy flies from the shooter to the target, and bounces back. This innocuous statement can carry some implications that might make things more complicated.


This is one of those things where you really need to decide what’s going on, and then make the rules interpretations loudly and publicly.

It can’t be a true bounce or reflection – the trajectory would be all wrong. So there’s a magic adjustment that happens to direct i on its way.  Cool enough.

What about range? Is there a magical energy boost that restores velocity? So that the projectile hits with whatever energy it would have? GM call, but I think the answer is “yes.” It simplifies the mechanics, and as long as you’re adding energy to redirect a projectile, you might as well get back up to launch velocity too.

Hit location? Easy – whatever your intent for the target happens to you.

Basically, the game mechanics are designed to allow the GM to act like Nelson when you attack your target. It basically says “don’t give the player a clue that he’s firing into a magical field of “stop hitting yourself!”


So that takes care of the hitting. What about active defenses?

Seems fair to say that if you were allowed an active defense based on your actions on your turn (maneuver selection), you’d be allowed one if you’re attacking yourself.

But there’s a trick. Certainly, you may usually dodge or block ranged attacks (and with a one-handed weapon, it’s possible to have a shield-and-pistol thing going on), and with Parry Missile Weapons, you might be able to break that one out. So what’s the trick?


As always, the caveat to any sort of active defense is spelled out in the Basic Set,  specifically on p. B374:

You also get no active defense if you’re unaware of the attack. Examples of situations in which no active defense is possible include a stab in the back from a “friend,” a surprise sniper’s shot, and a totally unexpected booby trap.

The reverse missiles spell would seem to qualify in many cases for the “unexpected booby trap” codecil. If the attacker is unaware that magic even exists, then he’s going to be unprepared to react against it. 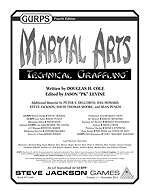 In a way, this is why the “Aimed and Sighted shooting is an All-Out Attack” rule from GURPS Tactical Shooting is annoying (to the players) but important. It tells all involved that you are not expecting counterfire.

So, if you are aware that such magic exists, and you take an option that allows an active defense, then you get to use yours. I’ve had this conversation at least once with +Sean Punch and for a long while we made a joke about it in GURPS Technical Grappling, that taking “Attack” instead of All-Out or Committed Attack assumes that the fighter believes that the referee or the fans of a sporting event might pull out MP5s and suddenly start shooting into the ring. I included the One Foe option in Technical Grappling for that exact reason.

One tends to assume that if you’re shooting or loosing an arrow at a foe, you’re not expecting it to come back at you. And if you are shooting, then you’re not doing the kind of evasive maneuvering that grants you a dodge.

To that i say: yes you are. If you didn’t take Committed or All-Out Attack, you are doing that kind of movement. That’s what such options are designed to preclude.

If, however, that just bugs you, well, there’s a handy article (Dodge This, from Pyramid #3/57: Gunplay) that spends four pages giving you options, including painful modifiers to see a projectile coming so that you can dodge, parry, or block it.

So, ultimately the answer to the question of “can you Dodge reverse missiles” is probably simply “yes.” If you didn’t choose a maneuver that precludes a defense, and if you are aware at all that such a spell exists, you are presumed to be ready for such.

If you don’t like that plan, there are options, but I think the intent is that you have to spend a “holy crap!” moment dodging, and that the line of fire from your notional victim to yourself is now threatened behind you!

3 thoughts on “Reverse Missiles – the options”