I’m not a frequent FATE gamer, though it’s one of the games I’d really like to try a few times to see what it’s like.

Nonetheless, +Rob Donoghue banged out an interesting post on using Tally Scores with FATE for getting random damage.

It hinges on reading fate dice in a slightly different way, but since you can read them in both ways at once (tally vs adding up successes, or whatever the right term is), I was wondering if utility could be had by doing so. 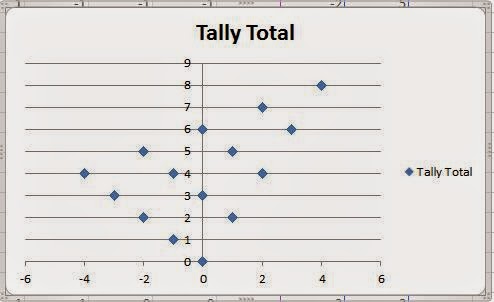 Here’s the table of outcomes. As you can see, the more successes you get, the higher your average damage score (tally).

As you get more negative successes, however, the tally score also trends upward.

This makes sense on the “more success is more damage” perspective. Less so on “fewer successes is . . . more damage.”

The weighted average damage is also plotted, for completeness.

By and large, you are twice as effective with four successes as you are with zero or one, which actually isn’t that bad in terms of spread.

One of the options in FATE for failure, though, is “succeeds with a cost.” Well, if you’re going to pay a big cost, you will probably have to sacrifice a lot to get it. So perhaps if whatever consequences you pay are very large, (you need to pay a lot to turn four failures into a tally 4 damage result) then the “bouncing” aspect of the damage result make sense.

After all, the best result on four failures is 0.2 tally higher than the typical result for zero successes. So if you don’t pay the “cost of failure,” you get no damage/tally. If you pay it, you can get something out of it.

Not sure if that’d work, but there you go.

Thanks again to +Rob Donoghue for an interesting post!

One thought on “Tally and Successes in FATE”