I was chatting with +Peter V. Dell’Orto and +Tim Shorts last night online, walking them through the basis of my Heretical DnD project.

We were talking about the consequences of taking wounds, or having had your Stress Points worn down. Just brainstorming in an idle fashion, tossing out ideas, and someone, I think Peter, mentioned that if things were in a really bad way, that you could pick up Stacked Disadvantage.

Hmm, we said. What would that be? Well, probably taking the lowest result of more than 2d20. But does that look interesting compared to regular Advantage/Disadvantage?

Turns out it does.


The first question is whether stacked disadvantage has enough mechanical utility – does it actually drop the chances of being successful by enough to matter?

Turns out it does. 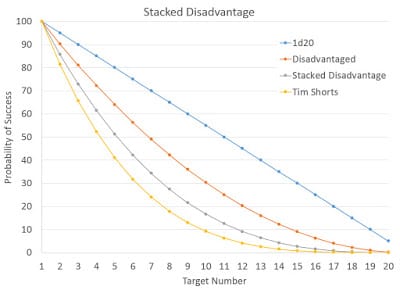 I’ve created two new categories of being disadvantaged, called “Stacked Disadvantage” and “Tim Shorts.” The first is lowest of 3d20, the second is 4d20.

You can see from the probability of exceeding a given difficulty number that the Stacked Disadvantage is significantly less favorable than picking the lowest of 2d20, and the Tim Shorts level approaches the actual probability of Tim rolling higher than a 1 on any important combat task. 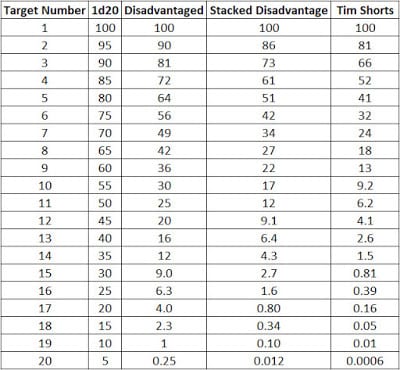 So that’s one way to look at it. Another is to look at the equivalent probabilities of meeting or beating a target number – basically take all the modifiers that go on either side of the equation and make it 1d20>N. So if you normally roll 1d20+5 vs. AC 16, this becomes 1d20 greater than or equal to 11 (which should be, and is, a 50% probability).

That chart shows what simple mental calculation shows too: the odds of rolling a good roll with Stacked Disadvantage are really bad.

Finally, another simple way to get a feel for what’s going on here is a risk-based one. What number can you expect to roll under X percent of the time? That’s a way of asking how concentrated towards the bottom of the target number range the dice will be, and as you can see, it’s pretty ugly.

The rules-as-written disadvantaged mechanic concentrates it more tightly. you’ll be rolling 10 or less 75% of the time, and you have only about a 5% chance to roll 16 or better.

Stacked Disadvantage has 90% of your rolls being 11 or less. And 19 times out of 20 your best roll can only be a 12. Note that rolling 1d20+5 vs AC 16 only really requires an 11, but that means Stacked Disadvantage takes that chance to pretty low – about 12% in fact.

This method of looking at it has its limits. Your odds of rolling (say) a 20 are only 5% with 1d20, and saying that you are at -1 because your success chances go from 5% to 0.012% really, really understates how unlikely the die is to come up 20 on all three (or four, if you’re Tim) dice. But the depth and breadth of the valley of doom is illustrative of how deep in the trouble pool you are.

Stacked disadvantage may well have its place in the pantheon of elegant but effective mechanics. And that, of course, means that stacked advantage has its place too.

As much fun as it is to bust on Tim for the frequency of his rolling a 1 at exactly the wrong time, in reality, going to the fourth d20 doesn’t really buy you much. Unless the player is attempting a ridiculously easy task – rolling with proficiency and/or expertise and an attribute bonus against a DC 10 or lower target (so net difficulties of 3-5), there’s so little probability of success that the GM might as well say “nope, can’t roll.” Also, the difference between lowest of 3d20 and 4d20 isn’t that much: never more than the equivalent of another -2 tossed on top of everything else.

So I’d leave the “lowest of 4d20 “level behind, but Stacked Advantage and Disadvantage may well find their way into my stable of things to use when GMing 5e.

Oh: I don’t expect I’m the only one to think of this (and in fact, Peter was the one that did), but it seemed cool enough to write up anyway.

Well, this looks like it’s going to be a popular post, or perhaps notorious. I’m getting a lot of feedback, especially on Reddit, but it’s good stuff.

1. Stacked disadvantage is meaningless; Disadvantage is bad enough
Disadvantage pulls in the median by 4 (as you note); stacked yanks it down two more, from 6 to 4. That’s not that big of a deal.
However, what Stacked does do is pull in the tail further. The 90% for Disadvantage relative to a straight roll drops from 18 down to 14, and then Stacked drops it further down to between 10 and 11, which is about the same oomph as Disadvantage.
Beyond Stacking once, I agree: no profit in it.
2. Why not do advantage too?
A good question, and while I address it in my closing, a G+ commenter made a great point:

Also is the stacked dis/adv something that the DM holds onto until times where it is called for(kind of like handing out inspiration) or is it something that is always in play? If it is always in play I think it can really break the game once you start building characters to take advantage of the rule. Right of the top of my head I could build a straight up human variant barbarian who would have stacked advantage on almost, every attack. I think this is the reason WotC decided to not make dis/adv stackable right out of the gates.

Yes, quite – I’d not considered that one fully. That point about a double-stack adv/disadv by character design is a good one. My mental image was that this sort of thing would be only applied based on conditions. So that (for example) if you were, um, grappled AND on ice, yeah, that’s doubly sucky.

But the probabilities invert for advantage, and you’d be rolling 10+ 95% of the time, and a 20 about 19% of the time. The good news is that that sort of skew is still inherently capped at 20, which is the awesome part of the mechanic – no automatically rolling a 40 or something.
3. You’re going to turn the game into 3e/Pathfinder (or GURPS, for that matter)
I think that rolling 3d20 and picking the lowest (or highest) doesn’t run into the Death by Modifier problem that some don’t care for in games that feature a heavy dose of such things. GURPS is a bad one about this, to the point where I wrote a post about trying to cut down on modifier-driven game delay. Pathfinder does have a component of bonus-hunting to it, and furthermore, the bonuses get very large.
I don’ t believe this to be the case for this method, because it still is contained within the core concept of “bounded accuracy” in 5e. The worst you can roll is a 1; the best is a 20. No matter how many stacked ads/disads you do, that’s still true.
It does compress the probability distribution a ton, ’tis true. But modifiers are still there, and if you’re a high-level character with STR 20 and +4 for proficiency, even with stacked disadvantage you roll between 10 and 29 . . . though 90% of your rolls will be from 10-20  (and half of them will be 10-13). So it’s a real crimp in the style of a high-level character, but you can still thump a guy with chain mail and a shield 22% of the time.

6 thoughts on “Extreme Disadvantage for 5e”