So, as of the end of Day 2, we are 87% of the way to the basic funding goal, so things are going fairly well. A very low level of pledges will get us to the basic goal, but of course, I really want to hit at least the $4,000 level, so that I can fill the book with art. If we close in on that, there will likely be a few more stretch goals and reward levels I can comfortably add.

Dungeon Grappling has also gathered some early comments and a few reviews, where I invited someone to read the laid-out preliminary manuscript. Thus far, they’ve read it, and posted their review with no compensation or interactions with me from a “write about this” or “avoid that” level. They do, of course, tend to be folks that I’ve interacted with before. All of the folks I mention below (and likely more coming) are backers of the project.

Over at the Tavern, Erik took a look at the preliminary product. He’s promising to read it and write more later, but for now, he is pretty positive. The initial analysis?

Doug was kind enough to forward me the current rough of Dungeon Grappling. I haven’t had time to give it more than a quick glance, but what I have looked at looks good. He even addresses rulesets with descending AC. I’ll give this a closer look over the coming week.

Did I mention the buy in is just 5 bucks? Seriously. Currently PDF only, 5 bucks to solve my RPG grappling issues that have dogged me for the last 33 years or so? Priceless…

Full disclosure: I got to know Erik by playing Swords & Wizardry with him, which is also how I got to know Tim Shorts, who is offering The Manor Collection as an add-on in my Kickstarter. There will be more on that later, because it’s a fantastic little set of products, filled with usable content.

What did he think?

Dungeon Grappling is a cohesive set of rules that works across multiple iterations of Dungeons and Dragons. For those familiar with his work on GURPS Technical Grappling Doug approaches the problem in the same way, but tweaked for a different game engine – and it works surprisingly well. To tell you how easy it is I’ve not looked at the new Dungeons and Dragons, glanced at Swords and Wizardry, and gave up on Pathfinder a while back. The system he presents was intuitive, easy to understand, and provides a lot of flavor. In short, it’s a module you can just bolt on and go.

In short, it was intuitive enough that you don’t even need to know the rules for the games from OSR through Fifth Edition (and thanks to Erik for that phrasing, which severs a Gordian Knot I’ve been struggling with for a while) in order to understand and assimilate the rules.

Peter Dell’Orto and I have know each other for a while. I helped playtest his big hardcover book (GURPS Martial Arts) and have collaborated with him and playtested his writing ever since. He is one of the prime playtesters on the Dragon Heresy RPG project, and has significantly moved and improved my abilities as a writer and editor as a result. His mantra of “does it work in play” has become a lodestone for me, and I can’t tell you how many times I’ve come up with a neat rule, applied that filter, and junked it entirely, or edited it heavily. Read the comments on that particular thread for some discussion of rules theory versus rules fun, too. Good stuff.

So even if Peter didn’t co-author this manuscript with me, he was involved in the original Manor article and also has informed how I write rules.

What does he have to say?

I’d urge you to check out this Kickstarter. Doug’s got a solid product here – I’ve seen it (I mean, its origin was a co-authored article and I’m the co-author) and it is good. It’s really superior to most of the clunky, ineffective, or downright risky grappling rules that come with so many games. Take a look and give it a chance. I’d really like to see him succeed at this.

Larry wrote an original review of the article Peter and I wrote for Tim Shorts in Manor #8. I remember it being one of the rare pieces of feedback you get where it’s thorough, favorable, and explains the pros and cons of the article coherently and succinctly. When I saw he was a backer on the project, I asked him if he’d like to preview the laid-out version of Dungeon Grappling. He accepted.

I will recommend you click the link to the site above – it’ll take you straight to the review. But I will repost his summary:

My take – This is something that has been needed in RPG’s for a long time. The Grappling Rules in AD&D are notoriously challenging to implement in play. The short and simple system introduced in Manor #8 is expanded in these pages. It gives a bare bones system and adds options and touches on how it can be used in specific systems. The basic rules will work for variations of the original game and clones, as well as later editions and variants of the original game.

The system is built on a basis of normal combat resolution. I like this approach. Use what is there instead of building a new system that doesn’t feel right. Another good example of this is what James Spahn did in White Star with vehicle combat using the same format as individual combat.

I can’t think of a situation not explicitly covered in these rules. I wrestled a lot with my brothers growing up

But really: Read the whole thing.

That is hopefully not all the feedback and reviews that will be coming. While I’ve not distributed things far and wide, I have given some folks the opportunity to review and comment on the document.

It’s been valuable. Not just because it underpins the system and gives me a bit of sunshine in my day, but suggestions like Larry’s in his FMaD review can be added as an instant and useful improvement to the book. I intend on incorporating as many of his suggestions into the book as I can pull off.

So, if you haven’t yet, please check out the kickstarter, and back it. As we pass stretch goals, I might even have a few more surprises lurking in the wings. 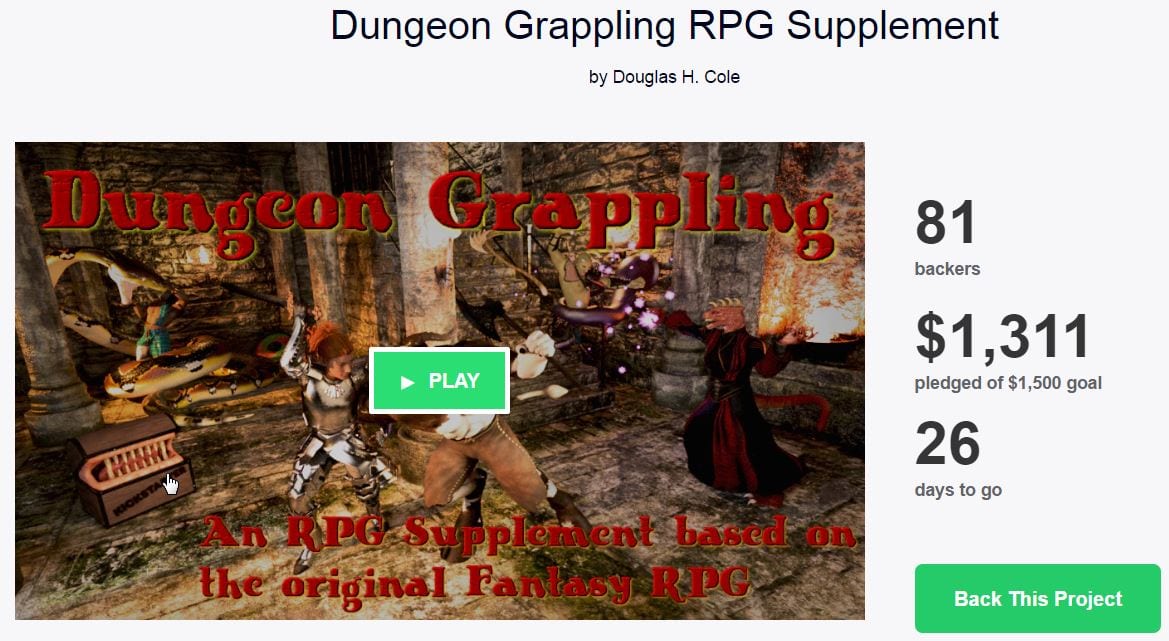