Dragon Heresy made a few changes to things – notably in the implementation of Wounds and Vigor to make explicit what Hit Points leave abstract (you’ll have to grant me a bit of dispensation for utility here; I like it, and it helps with certain narrative-mechanical consistency issues). Wounds for Joe Average start at 10; a 20th-level Berserker (barbarian) with STR and CON 24 can have 31 wounds. Creatures that are very large (like dragons and giants) multiply calculated wounds; small creatures divide wounds. It’s easier to smush a pixie than a dragon. On my Discord channel for Gaming Ballistic, someone asked me about Sneak Attack. Since I’m about to release some direct support for the Dragon Heresy system via an upgrade to Lost Hall of Tyr, it’s very topical.

The formula for wounds is CON + the STR bonus. So with starting Strength and Con scores ranging from about 8 to a high of 16 for starting characters; characters with the standard array could start with CON 16 and STR 15 for 18 wounds; a 9 CON and 11 STR would be about 10 wounds. There might be ways to have lower, but starting characters will range from 10-18 wounds, with 14 being about in the middle for PCs. 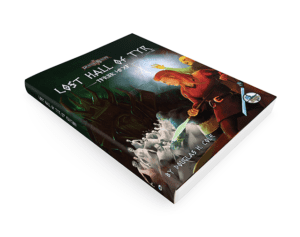 That’s an inappropriate use of “wherefore,” I know, since in context is means “why” and not “where.” But much like the appropriate meaning for the phrase, Rogues are absent from Dragon Heresy. I had to cut somewhere – a lot of somewheres – as getting from my three-volume, 420,000 word initial draft to something I could afford to publish (a single, 288-page volume) required basically cutting two words in three from the draft.

So rogues, whose primary mission of sneaking around and stealing stuff is dishonorable in Viking culture, and which did not appear in some of the original source material, got the axe.

No, really. What about Rogues and Sneak Attack?

Without the Rogue class, the Sneak Attack debate could be shelved. That being said, during the game’s design phase we worked through multiple versions of Sneak Attack. This is the one that we chose. Some of the changes to the published rules might not be reflected in the version below, but this is what the starting point for revision would be. My design effort have been trending towards “simpler!” for a while, so at the end, I’ll go through and make some notes – but the changes, if any, are indicated in strike-through.

Beginning at 1st level, you know how to strike subtly and exploit a foe’s distraction. Once per turn, you can deal an extra 1d6 damage to one creature you hit with an attack if you have advantage on the attack roll. The attack must use a finesse or a ranged weapon. Advantage can come from any source, but the most common are striking from hiding and striking when the foe is flanked.

The amount of the extra damage increases as you gain levels in this class, as shown in the Sneak Attack column of the Rogue table (basically 1d6 every five levels, capping at 4d6 at the top tier).

If the rogue also wants to make a called shot to gain +5 to the critical threshold, she must give up advantage to do so. Giving up advantage for this purpose does not disqualify the attack from being a Sneak Attack.

Example: Eydis, an 11th level rogue with a dagger, has lain in wait for a guard that is barring the way to the treasure room of a dungeon chamber. At the right moment, she eases out from her hiding place, striking her target, who has Threat DC 12, 50 vigor, and a wound maximum of 18. The humanoid is wearing heavy armor with DR 6. As the blow is a Sneak Attack, any Threat will count as a hit to armor and wounds, with only frantic defense able to convert wounds to vigor.

Eydis chooses to give up advantage to also increase her critical threat range from 20 to 15-20 on her attack roll. She will normally do 1d4+4 piercing with her dagger based on her Dexterity 19 (+4).

If the GM rules that the target is a “mook,” and is caught unaware, then if Eydis hits, she will deliver from 5-23 damage through the DR 3 armor, averaging 14, enough to render her target unconscious. If she critically hits, she will average 27 wounds, and the foe will start making death checks.

If the target is not a mook, and can avail himself of Frantic Defense, an average hit will drain 34 vigor, while a critical hit will result in a total vigor loss and 5 damage remaining—the armor will absorb 3, and the target will suffer 2 wounds and must make a morale check. Sneak attacks against “worthy” opponents are not auto-kills, but they drain vigor from the foe very quickly.

(Image stolen from We Are Rogue)

Looking at it a bit More

The core rules have changed a bit since this was written. Not a ton, but let’s break down the draft and see.

More Dice, Upon Advantage. This is the same rules basis for the SRD, and it hasn’t changed. If you can rack up advantage from any source, you can use this sneaky attack to add dice. This aids penetration of DR by virtue of extra damage, and your odds of a critical are higher, because advantage.

Surprise Attack. You lose reactions with a surprise attack, but the rules call out being able to use Frantic Defense, and you can’t use reactions (which Frantic Defense is) when surprised. The change for Frantic Defense to consume your reaction came late in the design phase. Rephrasing this as a Swift Attack, like bows, fixes this.

Halves DR. This is cool because it lets a rogue or someone else with this ability target foes in heavy armor, but doesn’t make them inherently more deadly by virtue of large piles of damage dice. That’s one of the benefits of the Aim/Evaluate action, so it’s basically getting that for free. You never quarter DR in the game, though; not yet. That’s for simplicity, just like “you can’t stack advantage.”

Can Increase Crit Threshold. You’ll have to trust me on this one: +5 to the crit threshold is about balanced with other things of similar ability. It’s not as overpowering as you’d think, even if you roll double dice on a 14-20 instead of just a 20.

Mook Rules. The example clearly has a “mook rule” where only heroes and important folks can avail themselves of frantic defense. The fact that the example is also a true surprise attack means that mook or no, in the current published version of the rules, they can’t avail themselves of Frantic Defense. To folks familiar with regular Fifth Edition, what this means is that facing a CON 16, STR 20 fighter with 85 vigor (read that as hit points) means if you hit, you’re attacking vs 21 wounds (so risking KO at 11 or more, death at 22 or more), and who cares how many HP they have?

So a thrust with a rapier from a Dexterity 18 rogue will do 1d8+4+Sneak Attack damage. At 10th level (since the fighter above might be 10th level) you’re looking at +2d6 extra and DR is halved. That’s 7-24 (16-17 average) on a normal blow, and 14-48 (average 31). That’s a strong possibility for a one-shot KO with a regular success, and on the average, dying with a crit (and possible instant death at more than 42 wounds, no saving throw, no death checks, just dead).

So sneak attack is plenty dangerous when done from surprise, and a ridiculous drainer of vigor (because frantic defense absorbs damage as vigor as 2 vigor to 1 damage), and makes armor half as effective.