In a previous post, I linked to +Jason Packer‘s concept for a Dungeon Fantasy sandbox campaign. In it, he posits a royal command, given by someone named King Krail, to reclaim an area bordered by some pretty distinct geography.

In short, he sketches out a sandbox, evocatively enough that it begs many questions, some of which are always relevant to any game, some of which may be a bit too rich for a stereotypical Dungeon Fantasy campaign. That being said, my experience is that while it is possible to run some sort of mindless hack and slash game, DF supports quite a bit more.

In any case, let’s start with the geography:

Describing the Sandbox of Krail’s Folly

I picture a large land area. The geographic features that Jason describes don’t always or necessarily coexist. So I want something that would take quite a while to travel across, perhaps weeks to months. So if I give people a walking pace of 2mph, and assume travel of 8 hours per day, taking two to four weeks to journey across this land gives something like 250-500 miles. That could be something roughly as large as the state of Montana, which might be a bit big. Maybe Maine would be a better example. A very large area (coincidentally, about the same land area as Portugal) that can be geographically distinct and diverse.

That makes it theoretically possible to cross on foot in about two weeks or so if you’re really focused on getting from A to B.
What else can we tell from the writeup? Let’s recap what that is:

“By decree of King Krail II, all lands east of Frostharrow, from the Gray Marshes in the south to the Granite Halls in the north, and as far east as the Broken Coast are to be reclaimed and purged of bandits, brigands and any fell creatures of The Blight. Any person who can carve out a portion of this land for him or herself and hold it against the forces of chaos and predation for a period of one year shall be granted possession of that land, for him or herself and any future heirs, in perpetuity, with appropriate title bestowed by the will of the king, with all rights and responsibilities attached thereto.”

So, to the North we have the Granite Halls. That sounds mountainous and forbidding to me; a natural geographic barrier. If you have Dwarves in your campaign, they’re going to live here, if they are sterotypical miners and dwellers. For some reason, though, they don’t live in this region. Or maybe they do.

To the south we have the Gray Marshes. OK, cool. Lots of standing water, maybe an extensive river delta. This makes some sense to me, since to the east we have the “Broken Coast.” So this monster land area borders a large body of water, probably an ocean or large sea. Maybe something like the Mediterranean. Warm (thus swamp) and fertile, and thus valuable. That it’s not under “civilized” governance means there’s something actively preventing it, likely.

We also have something called Frostharrow. Well, that sounds cold, and it’s the west, or maybe northwest, presumably. Maybe it’s another mountain range, or a glacier coming off of a range. Yeah, I like that. Maybe a glacier that extends south from the Granite halls. So maybe we have something like this: 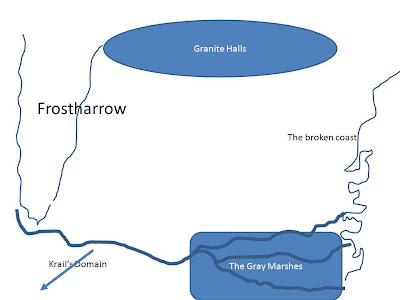 Who’s this Krail guy, and why do we care?
OK, so we also have someone named King Krail, who is offering up this territory. What’s his deal? Well, if this land is so valuable, why isn’t Krail going after it himself?
Perhaps he tried and failed. So he’d like to do it himself, in an organized way, but he’s failed. So he’d rather go to volunteers, in the form of PCs, to do what he and his army can’t.
Perhaps he would like to try, but he’s unable. His army is small, untrained, or unwilling. Even more interesting, he would do this in a cold second, but some rival is holding his attention and power elsewhere in his realm. So his most experienced troops, the hardiest fighters, the mages most deeply steeped in arcane lore are all otherwise occupied to the southwest. The PCs are needed because no one else in the King’s direct employ is available – though if the PCs become troublesome, part of the problem (they turn bandit themselves), there is recourse for the King to deal with them.
Another point to consider is why Krail wants this area cleared out.
What did this region used to be like?
One thing that makes this all kinds of fun is if this area used to contain some mighty civilization. Rome at its height or something. So there are tons of ruined fortresses, mines, dungeons, and ruined (or partially inhabited) cities. This gives all kinds of excuses for small “dungeons” occupied by all sorts of critters.
What’s this Blight thing?
Ooo. A source of nastiness. Maybe it’s a particular locale, like the Blight in Robert Jordan’s Wheel of Time series. Maybe “the Blight” is delocalized. It’s a connection between this world and some other realm, plane, or dimension from which foul creatures spring. That’s your Wandering Monster right there.
Net/net
This simple one-paragraph description that +Jason Packer provided leads rapidly to all sorts of plot-rich thoughts.
Really fun stuff.

15 thoughts on “Krail’s Folly: Pouring sand into the sandbox”