I’m into serious worldbuilding for the Dragon Heresy RPG now, so this will be a short post.

I’ve settled on an organizational structure for detailing the Races that come out of the SRD5.1 with nothing but the stat-block and abilities, and also the Kingdoms that make up the political entities in the setting.

So, what am I including with each?

Each race of course has it’s game-mechanical abilities. But there’s also the other bits that define a bit of the culture and background for each one.

The SRD5.1 races are Dwarf, Elf, Half-Elf, Gnome, Human, Halfling, Tiefling, Dragonborn, and Half-Orc. Half-orcs might be a problem from a setting point of view, as they’re not really the common cannon-fodder monster – that honor belongs to lizardfolk and kobolds.

However, fey are a big part of the setting, and legends of fey mingling their blood with humans – usually through charms and shapeshifting – are pretty common. I may keep the stats as they are and just rebrand them half-trolls. But really they’re not real trolls, but half-hobgoblins, because goblins are fey in Dragon Heresy. (I needed more fey. I made a bunch of critters fey that weren’t before, mostly with some nudges from mythology. I might yet do more – Will-o-the-Wisps in Finnish mythology guard faerie treasure, so rebranding them as fey instead of undead makes a lot of sense to me.

Anyway, here’s the outline of information to be provided fo reach race:

[This Race] in Etera

Kingdoms
Here, I nipped over to the CIA World Factbook, and totally stole the outline of what is covered for each country. Too useful not to.
Parting Shot 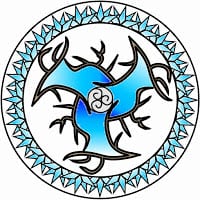 The overall work is about 306,000 words as last night. I was hoping to have the entire first draft complete by Sunday night, but I very much doubt this will happen – too much yet to write. I might be able to cover it all in a week.
I have, however, sent a chapter-by-chapter draft of the player’s book (175,000 words) to +Rob Muadib, my layout guy, and while the Races chapter is obviously expanding, the rest of them are basically done. The act of putting them into layout by chapter will also allow my three-dozen playtesters to say “hey, what happened to X?”
It will also allow me to start writing art direction. I posted a call for artists a while ago, but then things changed and evolved, and so I put that on hold. But I’m getting to the point where I can start writing a “what I would like to have” primer for prospective artists, and I’ve got some strong interest from more than one already. Paying them is the province of Kickstarter, of course!
Back to the grindstone. But things are getting closer. Much closer.

Edit: I also want to give a shout-out to both the +Norse Mythology G+ community as well as the Iceland reddit. While my forays into DnD-inspired reddits have largely been met with . . . hmm. Smug hostility? Maybe too strong. Still, it’s not been welcoming – and the SJG Forums are pretty special with regard to how eagerly people will embrace and comment on a well-written question – but these two communities have been very, very helpful to me in these later stages of development. The Iceland guys in particular have gone above and beyond the call to help me turn really bad Icelandic/Old Norse into far-less-bad Icelandic and Old Norse. The errors that will appear on the maps are mine, and mostly there purposefully.

Example? Rivers. The ending/word for river is just á. Toss in an -in ending, áin and you get a definite article or some such. I’m using it wrong deliberately – rivers in the primary Kingdom of my world end in áin in the area north of the river on which the capital city lies. It’s deliberately ungrammatical, to show that it’s a bit rough and tumble and archaic up there. Below the twin rivers that terminate at the capital city – the Freysáin and the Blítháin, all the rivers end in á.

They’re probably pretty smug about it, too.