Like many others, I downloaded the Basic Rules for DnD. I play in +Erik Tenkar‘s Swords and Wizardry game, was introduced to roleplaying with Basic, Expert, and AD&D in 1980 or so, and will always have a soft spot in my heart for it, even though my system of choice is currently GURPS.

Furthermore, it and its derivatives together and separately make for the 900-lb. gorilla of the RPG world. It’s probably not wrong to say “as goes DnD, thus goes the tabletop RPG market.”

That being said, there’s really only one yardstick for a game: the quality of its grappling rules.


The rules are, in a word, short. This is good, as any set of basic rules should be.

If you win, your foe has the “grappled” condition.

Finally, yes, you can move, but at half speed, unless the target is much smaller than you (two or more sizes smaller to be precise).

Being “grappled” is simply and concisely defined. You can’t move, and get no speed bonus . . . and that’s it. The rest of the condition note on p. 105 of the rules is how the grappled condition ends.

Well, in terms rules, there aren’t many. What do I think?

The rules are simple. A contest that allows for a grappler to easily determine if he can grapple his target or not. The resistance roll acknowledges the import of both Strength and Dexterity in grappling, which is also good. Escaping a grapple is likewise clear.

Grappling in DnD Basic is still binary. It also is an incredibly limited effect – the only thing it seems to do is reduce the target’s mobility to zero, and the grappler’s mobility to half. Not a great trade. The other thing that strikes me as funny, checking the list of conditions, is that there’s a Restrained condition right there on p. 105.

Honestly, that’s a better model for grappling. So, without further ado

Grappling follows a progression. If you win a contest of Strength (Athletics) vs. Dexterity (Acrobatics) or Strength (Athletics), you may move one level up in a progression from Grappled to Restrained to Incapacitated to Paralyzed. On the defense, you make a similar check, Dexterity or Strength vs. Strength (though allowing an attacker to use Dexterity would be interesting), and can move one level down in that progression. Note that once you’re Incapacitated, you can’t take actions, so you probably can’t try to escape either.

It’s not how I’d do it, but the Condition-based building blocks at least give the option of driving from a binary grappled state to a progression of well-defined states that end in the foe being pinned and helpless. The dependence on both Strength and Dexterity on the defensive gives the nod to wriggly grapplers, but the focus on Strength for attacking is well placed.

As presented in Basic, I’d give the grappling rules a D on the usual A, B, C, D, F grading scale. They’re clear, which is good. But the only outcome presented in basic is to remove your foe’s mobility, and that’s of such incredibly limited value that I suspect no one will do it. The rules suggestion of a progression from grappled to paralyzed is an easy tweak, though, and shows the power of the building blocks. The condition-based rules make for easy tweaking and not a lot of confusion, but in order for grappling to be viable, something must be done to the rules as presented. Because right now, they suck.

Of course, I did do something. I wrote a whole book about it.

Dungeon Grappling is available in Print and PDF, and covers 5e, the OSR, and the Pathfinder Roleplaying Game. 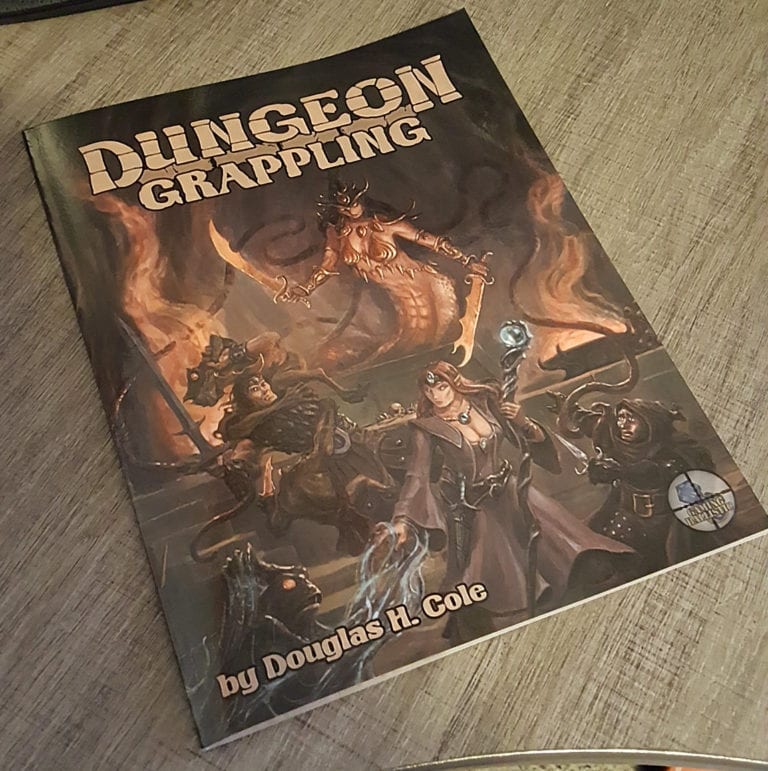