One of the new mechanics in the DnD Basic ruleset is the concept of being advantaged or disadvantaged. It’s a simple mechanic reminiscent of GURPS’ Luck advantage (though a tetch less powerful) or bonus point expenditures (where it’s basically the same concept).

The key bit is if you’re advantaged or disadvantaged on a roll, you roll twice and pick the best or worst result, depending. 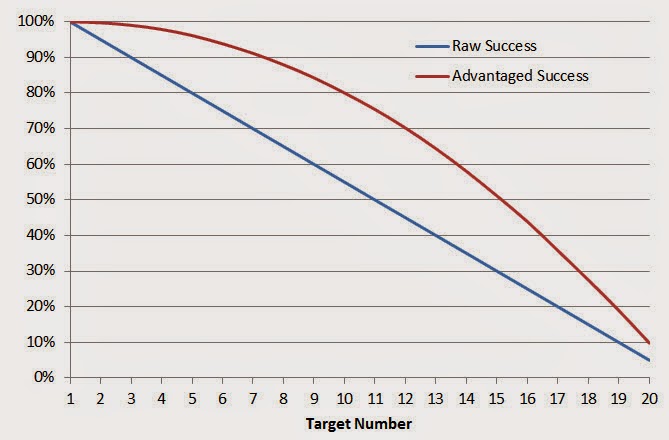 This mechanic skews an otherwise flat distribution (a d20 of course has 5% probability of landing on each number) to one side.

The net impact is interesting, in that the equivalent bonus depends on what you need to roll. For advantaged rolls, at the low end (because you’re picking the best of two), the equivalent bonus can be as large as about +5, meaning your odds of rolling that number or higher are about 25% higher with advantage. The plot above shows the difference between the curves is the percentage boost you get by being advantaged relative to a flat  d20 roll versus a typical target number from 1-20, such as ascending armor class. 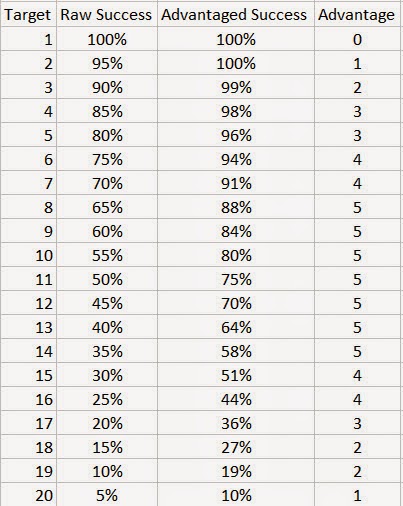 Perhaps a table is easier. Thanks to a commenter, I realized what I’d been doing wrong at just shy of midnight, and fixed it. The conclusions are similar – the bonuses range from zero (at the low end; you can always roll 1 or higher on 1d20) to about +5, and the best equivalent bonuses are in the middle. The average bonus is precisely 3, but that’s not the equivalent of a +3 bonus all over, because of the skewed nature of the distribution. Still, if you’re borrowing mechanics from the DnD Basic Rulebook for an OSR game, just treat the “advantaged/disadvantaged” condition as worth +/-3.

Note that is is possible to roll quite poorly on an advantaged roll. You’ve got a 1 in 400 chance of rolling a 1 (lower even than GURPS’ 1 in 216 chance of a critical 3), about 1% of blowing a roll on 2 or higher, and at 5% chance of failure (2 or higher on 1d20 raw), you have that same probability with a target number of 5. So being advantaged against middle-of-the road combatants (target numbers of 10 or so) is a big deal. Likewise, being disadvantaged would be a big deal.

Well, unless you’re +Tim Shorts using Roll20. Then you’re guaranteed to roll low, no matter what the probabilities are.

When all is said and done, the advantaged/disadvantaged mechanic is kinda neat. It’s more than just a flat +3 would be, which would still be a fairly straight-forward distribution (0% for 1, 2, 3, 5% for a 4, and a 15% chance of hitting a 20). In reality, that roll mostly impacts the middle of the distribution; if you’re looking to roll high, and you hit a 19-20 on your first roll, the odds of improvement are small. But if that raw roll is 6-16 (55% of the entire distribution), you’re looking at that second roll being typically 4-5 higher, which is darn nice insurance against screw-ups.

Which is what being advantaged is all about, isn’t it?