Last night I got a chance to play Far Away Land with +Erik Tenkar and the gang. It’s been a hell of a week so I didn’t do my usual transcription (not to mention that my keyboard is starting to stick. My trusty MK700 might be headed for retirement).

Anyway, we thought we’d try it. 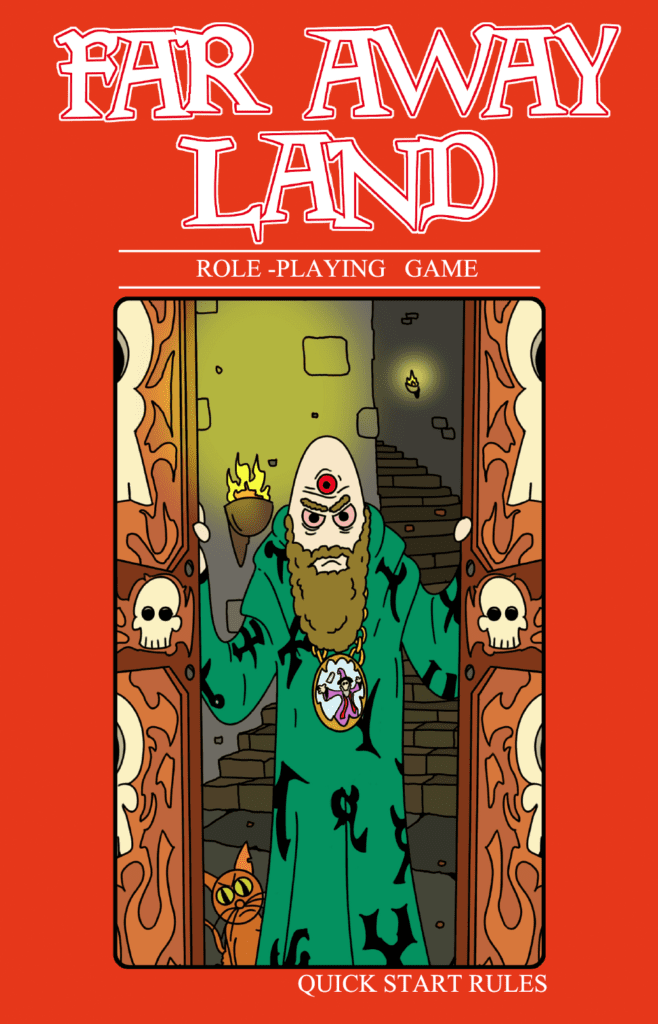 Mostly we shot the breeze last night. Though the appearance of my 5yo daughter, who loves to come down after she’s supposed to be in bed and put on headphones and listen was a bit of a damper on that. She probably learned some new words. Like reciprocity. And f**k. Hopefully she’ll remember the first, and not use the second.

The game was straight-forward. We started in town, headed south along a river, and arrived at a witches hut. We had a meal and solved some riddles, and got some advice and a potion. We journeyed on overland, and killed a large ogre or something and a bunch of gobbos in a cave. The drawing on the map was a squat lobsided tower with a single cave opening in the top. We initially called it Cyclops Tower, but then I – deeply in my cups – drew some more lines on it, and it became Dalek Tower.

We got a pretty good haul from that. A magic sword for Peter, someone walked away with upgraded armor.

Continue on, and we come to a Ziggurat. Each of the three levels had a slightly different challenge. We managed to fight and kill ’em all. Even the Big Bad fell without much ado, thanks to combined attacks and (except for +Tim Shorts of course) we rolled really well for initiative.

I’m going to sit down and moderate a debate between +Nolan T Jones and +Tim Shorts about how Quantum that Roll20 die roller is. Tim is the master of Quantum 1s.

We found a scroll of lightning on one level, which I immediately used on the next (I’m the only caster). I picked up what we called the Spear of Syphilis from the big bad – a magical spear that caused extra rotting damage on a hit if it gets through armor.

We then proceeded to the river, for some reason I cannot state, where we rowed boats through ghosts. They took a few swings at us, and we mocked their insubstantialness.  I think we ended there, with no harm done to flesh or ectoplasm.

The system is dirt simple. Character generation takes minutes, even for a rank newbie using the Quick Start guide. You basically assign dice. Oh, they call ’em points, but it’s very similar to assigning dice from the WEG d6 RPG.

The die rolling mechanism is interesting. You roll your stat plus any boon dice, and so does your foe. But only the best single die counts, not the sum.

So you get a distribution like this for higher numbers of dice:

The foe also rolls dice, and the attacker (if a PC) must meet or beat the defender’s roll. Odds of victory against two dice goes from about 66% at even dice (2 vs 2) to 83% at 5 vs 2. So better but not dominating.
Damage is an extra die, plus the margin of victory for the hit roll. That’s 1/2 point on the average for 3 vs 2; and a full point for 5 vs. 2. So again – not a wide spread.
Hit points? You start with something like 12-15 and gain 1 per level. So a hit can be pretty serious. Armor subtracts directly from damage.
It’s light and the rules don’t get in the way of the game. It’s not simulationist. At all. Don’t even try. But that’s not the purpose of these rules, so don’t worry about it.