We started with Ian coming back to New York, having been pointed that way from the deserted Island he had stayed at. Not knowing who to trust after the death-trap that was Miami.

I’d arrived in New York on Oct 24, staying at a seedy hotel that even bedbugs turned their noses up at. I’d gone out to get some Milk Duds or something, and on the way back, Ian got the strong feeling he’s being watched. A critical success on a perception roll means he sees the somewhat short shadow in a nearby alley.

I circle around, and try and lead the pursuer – ghostly girl; pursued by some group or person with walkie-talkies speaking in jargon. Have to get to the MAPS building. Run to there at Move 9 + sprint. See blurry lights, occasionally glimpse transparent girl. Arrive at MAPS building. “I don’t know what’s going on either; I’ve lost him.”

It’s the middle of the night; the battle of Riker’s Island was less than a week ago. At least 60% of the jailed inhabitants of Rikers escaped successfully. Teams of metas from all over the world are coming in to help. Violence is cropping up all over. The worst part of the breakout was that the super-secure facilities, with advanced MAD, people who were WMD in their own right . . . most of them got out. And the island defenses were turned on the heroes. Billions of dollars of damage to the facility itself, and the loss of life at the facility, meta and normal alike, has not yet been tallied.

The city is in a state of emergency, the governor is considering martial law. Crime and especially violent crime is up 30-40% in a week.

Murui Ao is sitting in the lobby of the MAPS building, recuperating from the battle at Rikers, eating every snack in the vending machine. A battle-suited warrior is also sitting there, attempting to recover from the battle.

As the entire city mainlines caffeine and other stimulants, the heroes gather and check in. The calm, steady voice of Eamon Finnegan has been a constant ressurance to the residents of the city, and he checks in at the MAPS building at roughly the same time as the Commander arrives, dressed in hobo chic, with a ratty trench coat over whatever lies beneath, which looks like normal clothes. It’s not, but it looks like it.

The building is basically a lived-in looking structure with the MAPS logo in front, and broken-looking and oft-replaced doors barely hanging on in front. The inside looks like a typical police station, with a classically Irish looking man, with a ruddy complexion, bald pate, and bristling red beard manning the desk.

Supers and normals, human and very obviously not human, lie everywhere. The smell of paper and viscera and blood, copper and pulp, lingers in the air. There’s a giant bear/man snoring in the corner as a man in a battlesuit works on a very damaged-looking arm with something rather like a screwdriver.

The Commander enters the building, and for the first time in years, no one recognizes him. Yukio (The Dog of NIMH) opens up the door by himself, and comes in giving the Commander the “You pretended to throw the ball and left me hanging” look on his face.

Eamon walks in just as the Commander disappears into a room for a much-needed shower and shave. Yukio deigns to be rubbed and petted, and tries to root through Eamon’s pockets for snacks.

Eamon gives up on the dog, and asks the Desk Sergeant how he can help. “I have no idea. Some mighty fine words you used this evening. See that guy there who just left? He’s a dead man.” 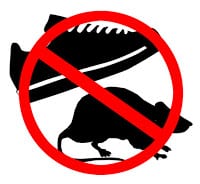 They wait until The Commander has showered, shaved, and walks out. The Rat Queen has reassembled, and comes out of the women’s locker room, continuing her mission to rebrand the rodent for the last year or two.  Her current appearance is olive skin, black hair and eyes, heavy eyebrows. Physically fit build. Rather rodent-like features: A receeding chin, a pointed large nose, and ears that stick out.

The Commander walks out of the locker room with a very MAPS looking uniform on. The desk sergeant asks if I have a team. The Commander says “well, I certainly have some groupies.” The sergeant gives me a stack of potential recruits, and a much larger stack of problems.

The Commander and Eamon ask for a team. We get passed a folder with a problem in it, and a few blood-and-viscera soaked walkie-talkie.

We have a job, and are building a team. One of the people that escaped from Rikers, Thomas Rivers, age 25, Jewish, blue eyes, blonde hair, 5’11”, 150 lbs. He’s a metahuman with the ability to manipulate water. He’s an Alpha-Epsilon classification, a pretty dangerous guy. He used to run the Legion Street Kings gang, but then he went to prison. When he got out of Rikers, he just ran.

He was living with his mother, who was living right off of Legion street. He’s brutal as hell, and was a known murderer and bad dude even before he had powers. He’s got an uncharacteristic affection for bling and nice tennis shoes. His personality profile suggests a low-functioning sociopath.

The Commander calls for a quick run-down of who’s good at what:

The Commander suggests that Eamon and Arc Light hit the databases and see if we can fid a string of crimes that match his MO, while Rat Queen and Murui actually hit the streets and look for him to return to his old stomping grounds in Brownsville.

Murui and The Rat Queen spread out (literally) to check for the last known and current whereabouts of our quarry. Rat Queen succeeds by 16 (!), aided by Murui for +1.

Eamon Finnegan fishes around in his briefcase and pulls out his laptop, signs into the wifi and does some digging rolling 5 against a Detective! of 18. Arc Light taps into the local net, and turns himself into a combination router and cell phone tower. We decide whether to code-name him MyBook or FaceSpace.

Everyone comes back with something good, but it takes a few hours. The Commander stands there looking leaderlike, while The Rat Queen channels her sentience into nearby rats. They found Thomas eating fish tacos with his homies on the way there.

Water-boy can control water as well as turn into it. And it starts raining. Great. There are roughly 16 gang members, none of whom are known to be metahumans, but we’re not sure.

We gather in front of the store, and roll Shadowing. Rat Queen succeeds by 16, and the rest of us do poorly. We all spend a bunch of Karma to not biff

We do a bit of quick recon. We also send in Rat Queen in rat form inside, while Zephyr goes in and tries to act like a fellow gang thug – his history is compatible with that. He’s instantly challenged and threatened with both a sawed-off shotgun and a freakin’ chainsaw. 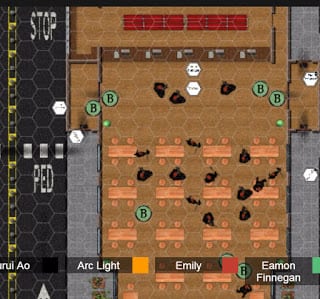 Arc Light uses some inboard AI to set off the fire alarm inside the building, flashing “DANGEROUS METAHUMANS” on the inside board. The bystanders leave, the gang members stay. The Commander is going to draw fire by entering from the West, Eamon will blow through the room and drop from above, as Zephyr comes in from the west, Arc Light from the east with an intent to zap water-boy (Vortex), while Rat Queen will take 20s to summon rats. Zephyr Waits, queuing on The Commander’s Wait. Commander smashes through the glass in full Samurai getup, triggering Zephyr’s Wait. He runs (dashes?) in, and hits one from behind, and the other from the front-right. They dodge, but are scattered. The Commander goes in, and kicks one for 8pts, and hits the other with his sheathed sword for 16. I might want to moderate my strikes against normals in the future.

Rat Queen starts to morph into her Rat Ogre form. It’ll take her two more turns to make that happen. Arc Light comes through the window and hits Vortex with a nonlethal electric zap blast, making his roll and hitting with a 10d fatigue attack, but Vortex turns into water and it goes right through him. He reorients like the Terminator from T2. And also goes outside the restaurant. 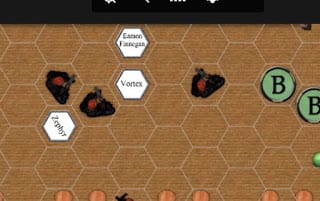 Oh, crap. That was our best plan. Who brought the knock gelatin? Curl-Ex? Absorb-all? Flour?

Vortex forms a ball of liquid and flings it across the room, and hits Arc Light with a 4d (3) corrosion attack – basically a water saw. His suit is compromised and loses 2 HP. This guy is an Alpha-Epsilon (1000+ points?) after all. His left arm has sustained the damage, and also reduced by DR 4. 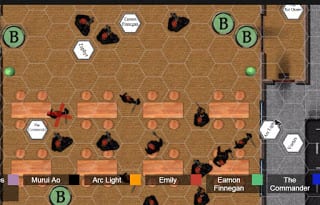 Eamon blasts through the roof, hitting the floor beneath him for 31 damage to the roof at his feet, and he weighs about 525 lbs. He makes a very, very dramatic entrance. Attacks Vortex from above with a gravity sledge, doing 35 crushing damage from above.

One of the mooks shoots at Zephyr with a TEC-9 to the torso; Zephyr applies feverish defense, spending 1 FP and using his slip and step of 3 to enter into close combat, parrying the blasts into the ceiling.

Eamon’s attacked with a machete; he just takes it, and 8 points of damage bounce of his DR.

A mook tries to shoot The Commander in the face with a shotgun; Commander slips in and does a grapplng parry with his sword, capturing his arm and entering into close combat. Meanwhile, Zephyr parries a blow by throwing one dude into another dude.

Arc Light gets hit with a baseball bat. He takes it on the DR. Ping. Another thug tries to attack the commander; he sidesteps (with the grappled guy) and dodges, while a third tries to chainsaw his back, and Commander dodges that too.

Zephyr uses his Step of 3 to move past two mooks, and kicks both of them in the skull at 15 or less. missing one and hitting the other.

The Commander strikes his sword on the ground, powerstunting and doing 28 knockback to all within 2 yds, throwing four bad guys 2 yards away.

Arc Light lights up Vortex with 42 burning damage; but the water continues to stream into him, enlarging and likely healing him. The Rat Queen blows a hole through the door large enough for a 15′ rat coming through like Splinter on steroids.

Vortex also does a power stunt, getting even bigger, and attacks the Rat Queen with a waterjet/cutting saw. A Feverish Defense for a Dodge, and it missed. Eamon grabs him with gravity, and succeeds in his grapple, but Vortex masses 8.2 tons now, with ST 50, so can’t move him. 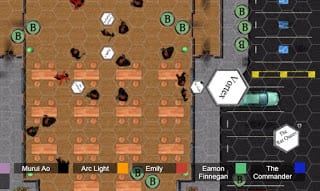 Most of the thugs that have been down stand up. One hits The Commander with a chainsaw, doing 11 points of nothing, and the saw stalls on The Commander’s armor. Chainsaws not good vs TL10 battle armor. Firearm Thug 3 shoots Firearm Thug 5. Oops. Someone shoots at Zephyr, who dodges and drops.

We call it there; it’s nearing midnight EST, and we have a lot of whupass to open on Vortex. We have to get him inside out of the rain so he can’t heal and grow.