I posed a question on Google+ the other day, asking if a blog is to update content at the same time on any given day, when would readers prefer that content to appear.

By a ratio of 66:1, people took the question in the spirit with which it was intended, which was to the good.

Here’s the quick results, which haven’t really changed shape as the tallies went from 25-40 votes to over 60. I doubt more will change it that much. 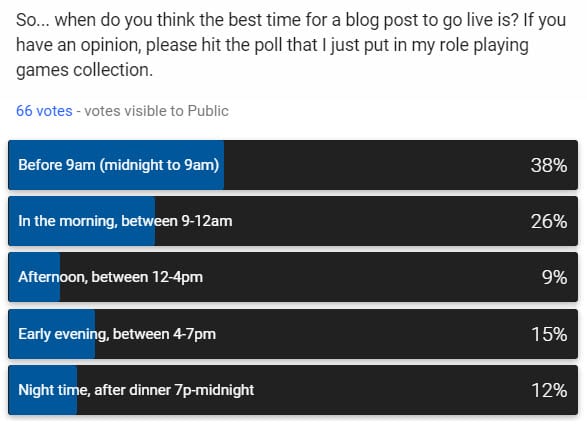 So, basically 8 in 20 probably would like to see their content appear before they wake up in the morning, so it’s the equivalent of  reading the newspaper at breakfast. This may well be “let me mark things I want to read later by +1’ing them, or noting interest somehow.”

The next chunk about 5 in 20 – and this did change hands a bit – is the “before noon” crowd, which probably says “I read blogs during lunch, so get your content up before that.

Combined 6 in 20 are afternoon or night-time readers. So really, that 4pm to midnight range is not when people want new content showing up.

But only 2 in 20 look for new stuff from lunch to the end of work. They’re busy in the afternoons, whether it be weekend or weekday.

So “in the AM” is where it’s at. I’m going to assume that midnight to 2am isn’t really in the running, but I’ll ask a more-specific question about when people sit down to read from about 2am through noon, and see what gives.

Thanks for participating so far.

In other news, I’m going to try and hold to a rough schedule for Gaming Ballistic in 2016. I’ll be playing in more games than last year, which is great. Two GURPS games and maybe a D&D game, each week. Not sure if I can keep up that full pace, but regardless, here’s what I’m hoping to do:

The “open” days will either be blank, or if I have an idea that doesn’t fit into another category, I’ll throw it down there. We’ll see if I can keep it going.