Thursday is GURPS-Day, and because of a quick trip back and forth to California from Monday through Wednesday, I’m a bit behind. Life gets that way.

Over on the forums, the poster known as mehrkat made the following remark. It struck a nerve with me in a good way, so I repeat it:

I admit I don’t take “canon” very seriously. Canon is my world specific. I toss stuff out at random at my whim which is definitely encouraged by GURPS. But I would absolutely consider something in Pyramid to be assigning it “official” status.

Writing for GURPS is kinda hard. The system itself isn’t that difficult – there are really only a few core mechanics. But depending on your interest, you’d best be at least passing familiar with what has been done on the subject you’re interested in. Even if you’re trying to cover new ground, it’s often a good idea to know what toes you’re stomping on.

Looking at my own works, for example:

Ten . . HUT!: Well, this provides finer gradations in Military Rank. Most useful if you’re actually building a character, so while it can be applied to existing games, once the dude is written, there’s probably not much point.

The Big Guns Thing: Can be used as a drop-in for any weapon, even in 4e. It also has a bunch of (then) house rules for injury, some of which are now more-or-less canonical in 4e, some not.

Armor Revisited: Optional rules, can be done in any game, even retroactively, and dropped if you don’t like ’em. So this one’s portable.

The Deadly Spring: Sort of like the guns article, in that it can be used retroactively (it’s a design system), but it mucks with the stats of a common muscle-powered ranged weapon, and if your GM goes on a “realism” kick, might nerf your concept. Also, you might want gonzo bows for Dungeon Fantasy. So YMMV.

The Last Gasp: Yeah, this one has real potential to make character concepts play very, very differently. It makes HT really important. Even more important than usual! This one probably needs to be adopted at the start of a campaign – or at least with careful consideration.

Delayed Gratification: I wrote this article so it could be dropped into an existing game. So this one’s portable.

Technical Grappling: a rewrite and expansion of grappling rules, but it is not fully compatible with the existing rules. It has an entirely new mechanic to represent how well someone’s being grappled, and so it’s not something that can be easily meshed with (say) people writing Pyramid articles referencing grappling. You’ll need to say “well, using the existing rules, this weapon does armed grapples like [blah], but if  you’re using Technical Grappling, treat this as a Flexible, Flail, Impaling weapon for grapples, and if you hit, it also inflicts 2d+2 Control Points!”

The other reason it’s hard is that, well, it’s not fiction. It’s technical writing to a very specific style guide. There’s a WYSIWYG template with the proper SJG styles, and using them can be hard to master. The formatting used to write up (say) Advantages, Templates, martial arts styles, or whatnot are quite specific, and can be easy to get wrong. They’re quite picky about pesky things like grammar and stuff.

It’s every bit as technically precise to write for Pyramid as it is to write an e23 supplement. The nice thing about it, though, is that it can be as short or long as you’d like. Well, if +Steven Marsh accepts it. My shortest for GURPS was probably Armor Revisited at about 1,700 or so words. My longest, never to be repeated on pain of death and mockery, was The Deadly Spring, at a mind-boggling 11,000. For what it’s worth, every word in Dungeon Fantasy 12: Ninja, including the index and table of contents, pull quotes and marketing pages, is about 14,000 words. So Deadly Spring is basically as long as a full e23 release.

That’s a GURPS supplement, right there. On a subject so esoteric that I doubt it would merit a full release – but because there’s Pyramid, it doesn’t need one.

Lastly: if you do want to write for GURPS, you want to start with Pyramid. I’d probably target something on the order of 3-5 pages in the magazine, or about 2,500-4000 words. Long enough to show you can do it, not so long that it’s a huge risk to print.

But make no mistake: GURPS is Pyramid, and Pyramid is GURPS. Grar!

+Jon Couts messaged me the other day about a question regarding The Last Gasp.

Turns out he’s running an arena combat with the rules, and he allowed me to link to it.

Click the picture to go to the play-by-post arena combat! 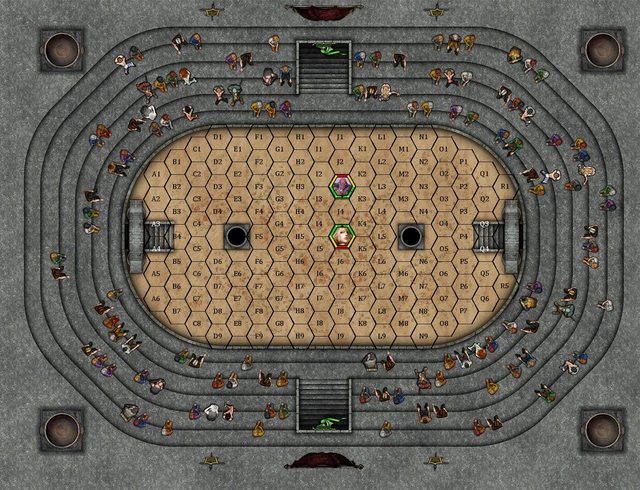 Thanks to Jon for giving the rules a try.

I might suggest he try Delayed Gratification (Setup Attacks) instead of the existing Feint rules in a future combat and see what he and his players think . . .

The important thing to me is that AP allowed the spearman to exhaust her foe, and drove some decisions on the part of the knight that he’d rather not have made. Good HT to aid recovery and shake off the impact of injury for AP reduction was a big deal. At times, skill drove the battle; at other times, fitness. A nice mix, I think. Jon also notes that by the end of the fight, Sir Mander’s ST was low enough that he was getting an extra -1 to use his axe because he didn’t meet it’s Min ST. The Last Gasp gives a small bonus to low min ST weapons in that way. If he’d been using a small axe he’d have been fine.

Thursday is GURPS-day, and so here’s today’s entry:

This one isn’t really navelgazing. I wrote The Last Gasp for a few specific reasons, and I thought I’d share a bit of how the article came about.

First, I’ve been a bit – frustrated is too strong a word – but at least a bit twitchy about the perceived, and maybe acutal, need to do something every damn turn in GURPS combats. There are relatively few incentives to evaluate, pause, or otherwise keep your distance from your opponent once a fight is joined.

Sure, you can use a Wait and Evaluate strategy before you really close to your desired striking range. But once you get within your range, there’s really only a few instances where taking even one turn to gather your wits is a decent thing to do.

The first is to interrupt death spirals of various kinds. If you can back off for a turn after getting thumped, you avoid the shock penalties that only show up for one turn after a hit. Another that can go for a while is to recover from stun. Others can be picking yourself up after a takedown, throw, or other “you fall down” result. Re-readying a weapon might count.

Maybe it’s because I suck, but when I used to spar, unarmed, long staff, twin midstick, double sword, long sword, or short-and-long (we do cool sparring in Hwa Rang Do), you would fight, break, fight, break, etc. Even in grappling, you occasionally pause – sometimes in an advantaged position, sometimes just holding your foe at bay.

Why pause? Sometimes, it’s looking for an opening. A series of feints and tests to get your foe to flinch and open up his guard.

But sometimes, you’re just freakin’ tired. You need a few seconds to gather yourself together, or throw your next combination. This produces what I’ve heard of as “lulls and flurries” in combat. A clash of arms (or legs, teeth, pointed sticks . . . ).

So, I wanted to do this, and I wanted it to it organically, arising from the rules. I also wanted to mimic one more thing I saw in real life. Before a tournament, I’d always, a month or two before, really ramp up my interval training, because how much wind you had really mattered in the two to five minute matches we’d do for grappling. We now do continuous sparring with takedowns and lockouts in HRD, and I have to imagine that your fitness level would be key there too.

So I wanted to have fitness matter. Call that “Note 1.”

The other thing I noted was that spending fatigue wasn’t that big a deal. Sure, once you got down to FP/3 you started having real issues. But until that, no big deal. In the DF game I play with +Nathan Joy  Cadmus has HT 12, so I basically have 7-8 FP I can use in Extra Effort before anything happens to me, and if I can chill out for an hour and a half I’m ready to rock.

Same thing with long-distance GURPS running, or magic, for that matter. It all recovers at 1 FP per 10 minutes (modified for Fit, Very Fit, Unfit, etc.) until you start losing HP.

But many of my friends who run marathons can take three weeks to recover from that kind of strain. Maybe (probably?) that’s losing HP. But you’re sore and stressed for a few days after a good weight workout too, and that’s not HP of damage.

So Note 2 was “losing FP should be easily recovered at first, but losing lots of FP should take a long time to recover, maybe as much as weeks.”

Naturally, my thoughts turned to the Size-Speed/Range Table at this point. I’d had a geometric progression going where every FP took a certain multiple (constant multiple) longer to recover. It was +Steven Marsh who suggested the leveled structure that eventually appeared in the article, which was a way, way better solution than what I’d had.

For the short-term fatigue thing, though, my initial thought was “you spend an action point every time you roll the dice.” Even then, I wanted something that was going to be simple to track in play. I wound up with something fairly similar, but the “per die roll” thing had a certain amount of compelling to it.

Then, of course, I had to consider movement. That was – and is – a bit of a sticky there.

Point costs were also tricky. Fortunately, I had a very capable group of people who were well-disposed to playtesting my ideas: I recruited from the Technical Grappling playtest list, and got great advice. I didn’t always follow it – author privilege – but it was really great seeing a PT report of a boxing match, as an example, and seeing the “standing eight-count” be an important recovery strategy.

Anyway, there are more details in there. I tried to cover short and long distance running and lifting weights in an early draft – those didn’t work out as clean as I’d have liked – but all in all, I think it’s a nice addition. I’d love to play a game in which AP are used.

Which reminds me: +Peter V. Dell’Orto loves to remind me by direct word and indirect role-modeling, that it’s not cool to harsh on people’s fun. The box in the article noting that it’s smply Cruel and Unusual Punishment to make a GM track APs on fifty mooks? Yeah, that’s inspired by my thought of what Peter would say if I told him that this was how all games needed to run. Thus, I worked out a simple 1d6 style roll that would dictate NPC mook actions but, on the average, work out to the same number of actions and lulls as if you were managing your AP one by one.

Just a side-note, and a thank-you.

My article, Delayed Gratification, appeared in Pyramid #3/52: Low-Tech II, this past Thursday.

I received my check in the mail from Steve Jackson Games on Saturday.

+Steven Marsh and +Steve Jackson Games are to be commended; my understanding is this kind of alacrity is the exception, rather than the rule.

My writeup of Chapter 3: Classes for Pathfinder is about half done. Six classes down, and it’s already over 2,700 words.

Breaking it into two parts for sanity.