The latest Unearthed Arcana came out recently, and its topic is Feats.

Now, feats are interesting to me, especially in 5e. They’re supposed to be boosts, not taken in any particular order, roughly equivalent in value to the +2 to one stat or +1 to two stats that you eschew by taking one.

This particular Unearthed Arcana gets into the design and crafting of such things, and has some truly cool little nuggets in it.

So, let’s get cracking, and do what is effectively a review article. 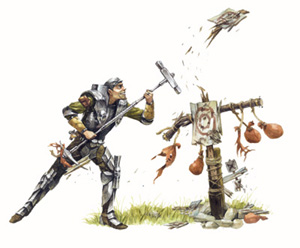 The text here isn’t labeled as such, but it’s an introduction, and delves a bit into the purpose of Feats.

Firstly, it notes, feats are optional. Classes can’t refer to Feats, and Feats should never be explicitly part of a core class ability.

Huh. Makes sense, I guess, though a lot of feats that I’ve seen online and on the internet effectively duplicate class abilities, usually plus or minus some features. I’ve seen Feats that basically grant a fighting style, and others give class options such as armor proficiency or weapon proficiencies.

In fact, I’d pretty much love to see a generic D&D version where nearly all class features and advancements could be expressed in terms of something like a Feat. What a powerful way to make generic the most popular RPG out there (broadly classing all D&D-flavored games, from old-school basic to Pathfinder to D&D5e as “the same” from this perspective, though bitter fights have just been started, gauntlets thrown down, and friendships destroyed. Alas.)

But that’s neither here nor there, and the purpose of Feats in 5e is cool flavor that doesn’t outweigh (or isn’t supposed to) a +2 to a stat, which is +1 to an attribute bonus and all related skills. Keep that in mind, because it’s key.

That should mean that any given feat should not give more than +1 to hit and +1 to damage on the average with a favored weapon. Oh, you might get more than that, but that should require some sort of activation situation, like using a reaction or bonus action, so that you’re giving up something you might need to get that bonus. And since that bonus action (for example) can be used to deliver an extra attack with an off-hand weapon, the upper bound for what you’re giving up to earn that extra can be high.

The other thing that the text mentions is something I’d love to see expanded upon, which is that there are things that anyone can attempt, but a person with the Feat can do better. I’ve always loved this construction, because there are things like grappling throws, trips, takedowns, pushes, sweeps, etc. that anyone should be able to do, but that people with training should do better.

There’s already an example of this in the off-hand weapon attack. Anyone can do it, but you don’t get your stat bonus . . . unless you have the right Feat, which allows it. The attribute bonus and the proficiency bonuses are both roughly equivalent – +1 to +5 for attributes (and +7 if you’re a Barbarian with uber-Strength), and +2 to +6 for proficiency.

So you could easily imagine actions where everyone could do a task with one half of that (all characters can do X and add their attribute bonus to the roll), but with a Feat, get both (but if you have the Experienced X Feat, you also add Proficiency).

Lastly, avoid chains of Feats. I like this because it makes it such that characters can grow organically, and it avoids some of the “system mastery rules over cool concepts” issues that games that have skill trees that stack up to be a dominating megapower can build.

It ends with a good rule of thumb: much like Backgrounds and the features beneath them, Feats should never overshadow the Class (and race) that are supposed to be the dominant choices in the game.


Interestingly enough, the first example is a negative one, which offers up a cool-sounding feat, and proceeds to illustrate what’s wrong with it.

Let’s start with the summary


The example “do this instead” feat provides both rules and unpacking of them.

The article then gives more example Feats. Let’s see if there’s any overall generalizations that can be made with the rest.

Blade Mastery gives you the +1 to attack rolls. It gives an example of using a reaction to gain a defensive boost, which is a neat way of using that feature. It gives a major boost to opportunity attacks (you get advantage), but since the victim always knows he’s walking into one (the triggers are not hidden), this is a boost, but not a game-changer. Walking into the range of a ready swordsman (or any other fighter) is risky, so deal with it. Also, the opportunity attack is also a reaction, so if you take it, you give up the defensive bonus that you can get with the other option. Getting +1 to AC when using a sword or other weapon is also part of many fighting styles (and presumably this would stack) so it’s not unheard of or unusual as a benefit.

Flail Mastery covers the same +1 to attack rolls (a common thread), allows you to bypass shields by burning your bonus action, and can use an opportunity attack (your reaction) to knock a person prone. This is better suited to Witchking-like flails than nunchuks (also a flail), but sort of includes the ability to wrap legs. With that in mind, it would be very interesting to, instead of this, make the user proficient in using the flexible weapon as a grappling aid, either giving advantage on Athletics checks while grappling, or enhancing an attribute or proficiency bonus. Having used flexible weapons to enhance grappling in my own marital arts training, weapon-enhanced grapples are a thing, and would be a great addition or substitution here.

Spear Mastery turns the spear into the martial weapon it has been through much of time, and when I read this, I nearly cheered. The nearly omnipresent +1 to attack rolls is there, but so also is turning the spear into a martial weapon, doing d8 in one hand and d10 in two. You can also set a spear to receive a charge, though this is more complicated rules-wise. It’s effectively an attack of opportunity (or at least, uses up your reaction), and has an escape clause via Disengage. Finally, a neat alternate use of reaction to extend the reach of a spear by 5 feet; I’d probably give disadvantage if this is done with a one-handed spear, but not if two-handed. Hard to control a six to nine foot pole with one hand gripped at the butt.


The last three examples show that Feats aren’t only for weapons. No, really.

In a general sense, for these Feats: 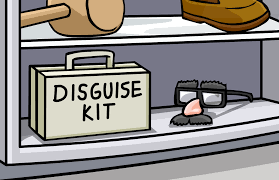 A note about the Master of Disguise Feat. The third benefit, which is spending an hour watching a person in order to spend 8 hours making a disguise to mimic that person seems like a textbook example of something that you can do without the feat, but better with it. So, I’d probably look at things like

So the Feat makes it all more slick, but with care and preparation, you can do this anyway. There’s a lot of great under-the-hood conceptual advice here to help make balanced and varied Feats. Given that Fifth Edition Feats presents rather a lot of these, and this Unearthed Arcana opens the door to still more, the two together provide a whole lot of inspiration, and no small amount of common-sense application knowledge, for creating such flavor on your own. Since every Ability Score Increase you get as a level advancement is (optionally!) a Feat instead, this gives yet another method for characters of identical class, race, and ability scores to differentiate themselves in a useful manner. I could easily see this sort of thing evolving based on weapons found in the dungeon. The character that picks up the enchanted flail can now craft a Feat to not only make the flail her own, but to make it obvious that it’s now a preferred weapon and fighting style. And that Barbarian that you modeled after a Viking Berserker now has the ability to treat the spear as the martial weapon you’ve always pictured it.

In fact, the option to make a simple weapon into a martial one is interesting because it opens the door to things like Horsebow Warrior, which might allow a shortbow to do the same damage as a longbow if you spend time (weeks or months likely) crafting it yourself. Since very small horn and composite bows could easily hit 150 pounds of draw weight by virtue of just being that damn thick, having a shortbow hit for d8 won’t break belief or the game. Having an extra-powerful longbow hit for d10 (but no higher) puts it in the same range as a two-handed spear (OK, maybe that’s a bit of a stretch) or a cut with a two-handed longsword. That extra damage (which is really the equivalent of a +1) is also the same bonus you get with a +2 to DEX, but losing the +1 to attack rolls. Again, not game-breaking and directly inspired by the Spear Mastery Feat.