When I talked about scaling DR by Tech Level, or perhaps simply showing diminishing returns, I drew a comment by +Michael Wolf that brought up some new thoughts.

There’s Nothing About Point-Buy That Isn’t Meta

On the one hand, he called it too meta. I disagree with this characterization, because assigning point values to things is about as meta as it gets, and figuring out the right value to charge for that is no more meta than anything else.

Where I agree, however, is that the vast majority of people in nearly any world (though perhaps not any game world) will not likely be walking around covered in battle armor. Unless your race has natural DR 25 or something.

Low Levels of DR are Valuable

Even so, I think his basic point, with which I agree, is that there’s a range of DR that’s valuable irrespective of tech level. After that, the marginal value of additional DR does in fact go down. The marginal value of DR 10,000 vs DR 1,000 (bouncing on average roughly 3dx100 and 3dx1000 damage) just isn’t that high if the maximum damage that can be dealt out by any force you’re likely to encounter is 3dx10. It’s just icing, gravy, or gravy-flavored icing.

Still, I had two suggestions, and one (scale DR by TL) would charge vastly less for DR at TL8, with only 35 points – The cost of, say, ST 13 and Striking ST+1 – giving you enough to bounce a .50BMG. The fact that you can strap on forty pounds of armor to do that isn’t really the point – you don’t have to strap on the armor. No human can punch you and do any damage. You can probably get nailed by a car (55 HP is about 2,500 lbs) at up to 50mph (Move 25) and just shrug it off.

That’s a power worth more than 35 points.

So Michael’s right, that the scaling of DR with TL is not well executed the way I’ve done it. There’s a range of damage where it’s just darn valuable to have DR, and honestly, for normal people, that range is very low, the first few points being the most valuable of all.

Consider that the average damage from a swung large knife in the hands of a baseline average human maxes out at 1d-2 (1d flat with an AoA). So with but DR 2, you’re 50% resistant to knife swings, with DR 6, you’re immune. You can’t be injured by a knife even with an All-Out Attack.


My last attempt tried to invoke the Size and Speed/Range Table to make things happen, because that’s a great way of doing things that’s built right into GURPS. I was also enamored of making each point of DR cost half that of ST, due to the per-point cost of DR being half that of ST.

That doen’t work, though, because each point of ST only buys you one point of extra swing damage, and a point of DR resists that. In short, if you’re using the SSR table, go right ahead and look to T-Bone’s original scaling. The question of where the crossover point is still exists – there can be good reasons to peg it at DR 10 or 20, I think. But using that scaling you get a cost where 100 points either buys you DR 10 or 20 (depending on whether you like 5 or 10 as the cost per point of DR in the linear range). Being protected against that car strike is a few hundred points in either case. 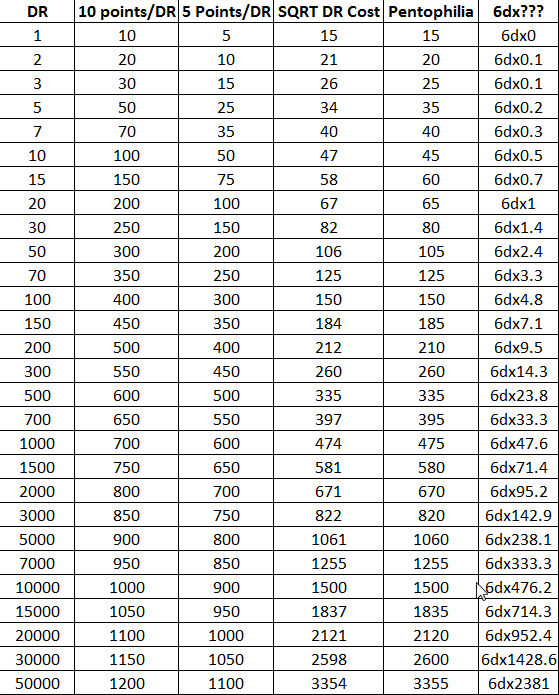 
We can also attempt to invoke true diminishing returns, and make a relationship where each point of DR costs a bit less than the one before it – basically a power law, where the point cost is equal to some constant times the DR you want to a negative power.

I played around with some progressions, what “felt right,” and ease of implementation, and oddly enough (though perhaps not) one that seemed to work well was simply

That square-root cost has some parallels in ST vs Basic Lift, but that’s not why it’s there. It’s there because square roots are easy and it produces sensible results. Engaging in a bit of pentophilia, you can rescope the cost in 5 point increments. The results don’t look half-bad.

How high must DR go? Well, looking through High-Tech and Ultra-Tech, there are basically two categories of weapons listed. That which you can defend against with DR, and those you can’t. In the “can defend” category, other than nukes, anything more than the equivalent to protect against about 6dx150 – which is really 6dx15 (10) is off the charts. Maybe you can put an APHD core on a TML, which gives you 6dx50 (5) I think. So DR vs 6dx250, or about DR 5,000. All of the rest are lower, or nuclear or antimatter weapons . . . or those with an armor divisor of “infinite,” which you simply can’t protect against.

So that much protection is on the order of 1,000 points no matter which progression you use. That seems fine.

Want to bounce a kiloton-scale nuke? For that you need DR 50,000 or so, and that’s a GM call as to whether it feels right that it’s only a few hundred points more (1100 at 5 points per level base scaling to DR 20 vs 750 or 800 to bounce most direct-fire weapons and kinetic missiles), or thousands of points more, which is what sqrt(DR) will get you.

The way I look at it, and returning to Michael’s point about unarmored humans, is that protection against “casual” injury – or even not-so-casual injury, since DR 10 is enough to ward against an angry ST 14 guy wth an axe, or most common self-defense pistols – is a big deal. Being able to ignore such an attack feels like a significant chunk of points, and I pegged it at 50. For about 100 points using the sqrt progression, you’re good against up to about 15d (DR 50) and you’ve got protection equal to the best body armor of the day (advanced body armor and trauma plates) all over, with no encumbrance. That feels about the same as the 100 points of unfairness for ATR to me.

Ultimately, the variables in a generic game are nearly too wide to consider. TL doesn’t strictly work, since with the right magic, you might be able to chuck monster damage. Diminishing returns has to set in, I think, and picking a progression based on the SSR table or sqrt(DR) will help – it really just depends on if you, as GM, consider a 10x increase in DR to be worth about 300 points, or some higher number (2,000 or so from DR 5,000 to DR  50,000). From a direct fire perspective, the 300 point version is probably right. But if your bad guys are slinging nukes, and you have, say, a cybertank that is capable of taking a near-direct hit from such a weapon.

Being able to bounce an assault rifle seems like on the order of 100 points to me, so I like either the 5/point per level version scaling with the SSR table, or the sqrt (DR) progression. At the very high end, I suspect that the opportunity cost of what you can do with the extra points is what matters. I think I’d rather charge less (5 points/level and the SSR) for uber-high levels of DR because the 2,000 points you’re not spending on extra DR can be spent on a hell of a lot of alternate capability. Where 300 points is a much smaller chunk of “what else can I do?” to give up.