We begin with some bookkeeping – we need to pick the three magic items we’ve attuned to, which limits the other players more than Nosphryc, since he only has three magic items. Good news is that reading the descriptions of the Sword of Lendorth and Amulet of Ren again, which provided two key abilities that I can draw upon for the undead guys:

We start out recovering from the fight, and then proceed to explore some more, following the evidence of foot traffic, assuming traffic is treasure. We decide we’ll use the Lens of Finding in each room to ensure that we don’t bypass any secret doors. It’ll slow us down, but worth it to ensure we don’t miss anything.

We wander for a while, well, purposeful wandering, and come to a T intersection. We can see evidence of a room to the left, so we head that way. Another couple of splits, that seem to head back to an intersection we’ve passed before.

We come to a standing pool in the middle of a small room. The pool is elevated a bit from the floor, maybe a foot. It’s also about a foot deep.

We investigate the pool a bit, checking it for any auras or vibes. As we get close to it, examining the pool, we can tell that the stonework around the pool is itself magical – but not the water. We check out the pool with the Lens of Molnar, and we find that the stone creates and purifies the water within the basin. We replenish our fresh water supplies, and warn Luven not to pee in the pool. Let’s see if Luven’s Mighty Wand can dispell the magic! Let’s not.

We proceed on, and the room to the south contains six rings and eyebolts, that seemed to be for holding animals.

We proceed onwards . . . and walk right the heck into an ambush. Eleven humanoids, with spiked clubs and loincloths. Mixed male and female. They are Grimlocks, a type of creature we’ve not yet seen.

We are not surprised, but split initiative. Luven hits for 12 HP, which does not kill anyone. And we get rushed by another ten guys from behind.

Nosphryc nails one with a critical hit, using his Archery feat to take -5 to hit and +10 damage. Blasts him for 24 HP, killing him. The second is actually a critical miss, alas. The guys only seem to have about 9-16 HP, so he’ll be splitting his attacks on the guys coming from behind.

Breena rages. She puts one down, and badly injures another. Adzeer throws down a Guardian of Faith – an indistinct sword and shield that wards off hostile creatures, who will take damage if they come too close. Kinds of a Patronus charm, but an angry one.

Dante tries to nail one with a firebolt, but just misses (thus establishing their AC as 11).

Luven fires through the ranks, at a disadvantage, and hits anyway with a 16; he does 18 points of damage even including his 4d6 sneak attack. He kills his foe.

Now the grimlocks are up. First all the guys next to Adzeer’s guardian have to deal with it – three get more or less vaporized, using up the 60 HP of capacity that the thing provides. That’s a nice hit, but still leaves us with six to the south and ten to the west.

Two attack Breena, both hitting. She’s a Grimlock magnet, but her damage taken is halved since she’s raging. Only 4 HP taken. Two attack and miss Adzeer; all the Grimlocks advance down the corridor, and now Nosphryc is sword-out.

He strikes one twice, killing him. Adzeer casts Spiritual Weapon, and a ghostly blade appears.

We actually discuss this rule for quite a while. Was not clear to everyone in the same way.

Anyway he hits once with the ghostly weapon, and once physically. A total of 20 HP later, and his foe drops.

Breena takes down two, the second with a mighty blow for 17 HP in one shot.

Dante misses again with his firebolt; he’s 0 for 3. Luven klls one for 26 HP – he’s very dead – with his light crossbow.

The Grimlocks attack. One hits Adzeer for 5 HP, and two hit Nosphryc for 10 HP total.

Nosphryc takes down one next to Luven, leaving him room to use his crossbow. He hits a second foe, but not enough to kill him. Adzeer misses with his Spirit Weapon, but hits hard with a melee attack, killing another.

Breena steps up to the plate with a critical hit for 20 HP, murderizing another. She spins, and attacks the one Nosphryc hit, hitting him and dropping him for 13 HP, enough to ruin his day as well. Dante finally connects with a firebolt, doing 13 HP of flaming death. He’s toast. Grimlock: it’s what’s for dinner! Grimlock: the other white meat.

Hey, that’s what they get when their battle cry is “YUMMY YUMMY EAT EAT!”

We speculate that this is either the worst ambush ever, or a clever drain on our resources before a real fight.

At this point, we’re down to but four Grimlocks; they flee. One triggers two attacks of opportunity, one from Luven, another from Nosphryc – he dies. Another triggers a spiritual hammer and mace attack from Adzeer, and again takes 15 HP on the first attack, making the second irrelevant.

Luven decides to give chase; he hits one hard in the back, but doesn’t kill him. We joke that the Grimlocks have isolated the gazelle from the herd. Luven kills one on an attack of opportunity as he flees, and then runs down and kills the last one. 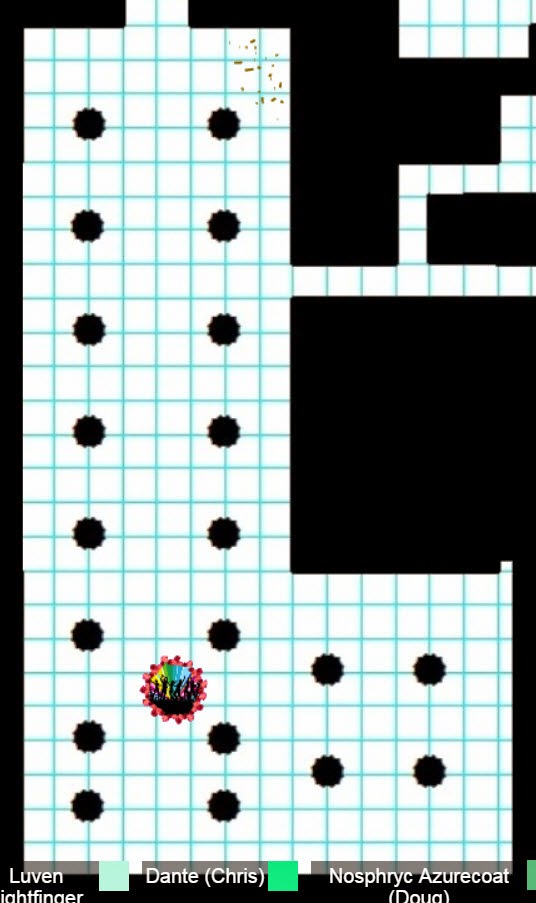 Upon searching the bodies, we find many have a rough cloth bag, most with meat in them. One with a pink diamond (worth 5,000gp), and one with a plush figurine. Of a mind flayer. Yikes.

It could be used as a fetish, but Grimlocks were once the slaves of mindflayers, and they still venerate them. So it could be a holy symbol, a security blanket, or a freakin’ chew toy. No idea.

We continue to explore, looking for the primary room where the dual-pronged ambush came from. We find it – a 40×120+ foot room with pillars supporting a tall ceiling. We check both the pillars and the walls with the Finding Lens, but it’s just a big ol’ room, with periodic pile of poo where the Grimlocks did their thing. Luven, with an eye for treasure, finds something sparkly in the poo – he uses Slight of Hand to nab it.

We contemplate taking a long rest – and decide to take one. We hole up where we fought the southern wave of Grimlocks, making a 300-like wall of Grimlocks

We let Breena’s Bear take a watch, then Dante and Nosphryc, then Adzeer and Luven take their turns, and a long rest is embarked upon. We hear sounds of dripping water and the occasional scuffle, the first watch is as still as death. During the second watch, far off in the distance, there is a horrible wailing scream . . . then nothing. The third watch passes without incident as well. We’ve passed around magical items that we can’t attune to, the most notable being a Cloak of Protection (+1).

We then discuss the attunement rules. We talk about attuning to 2+Proficiency bonus. And a few other options, but no resolution is found just yet.