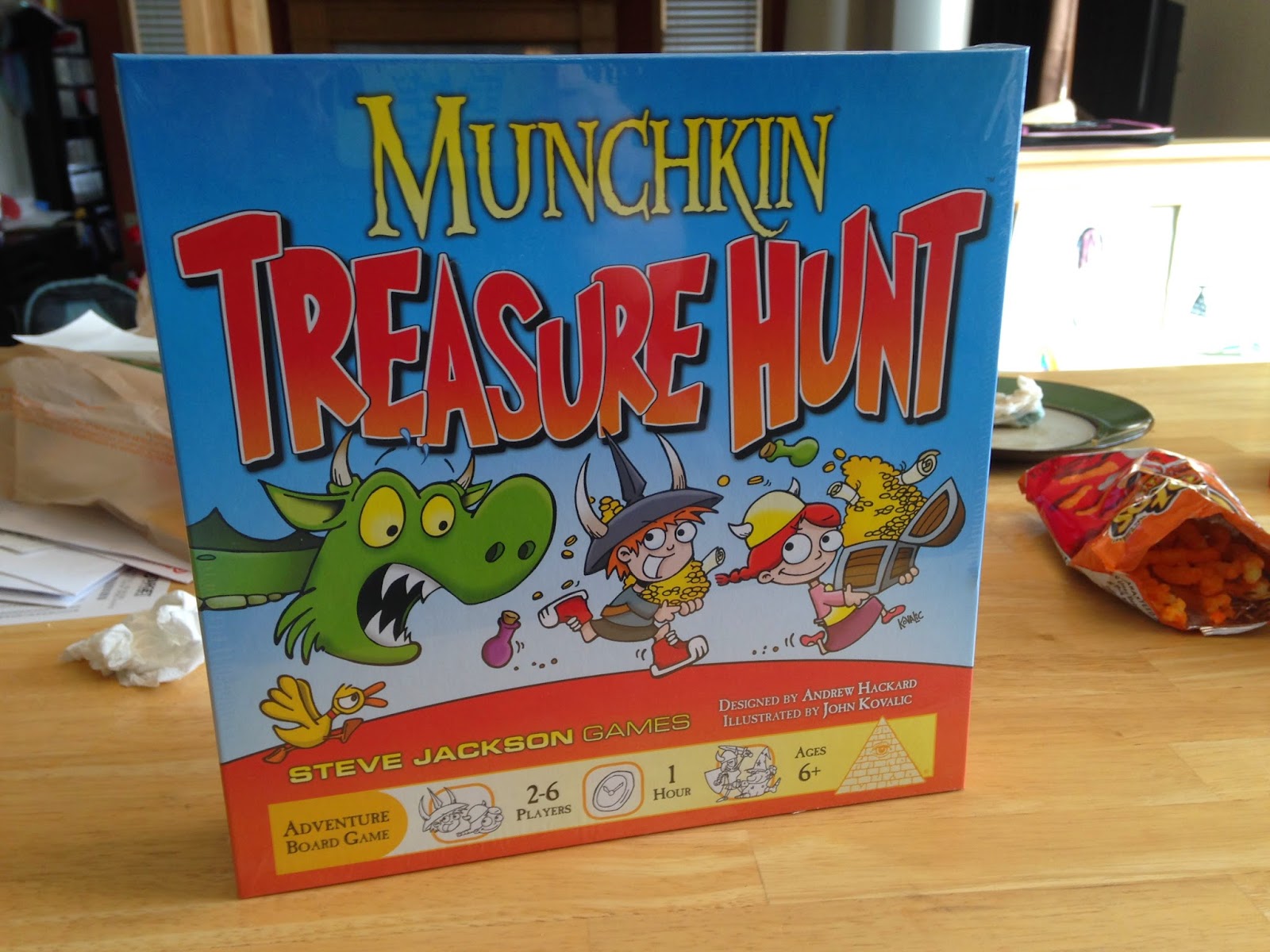 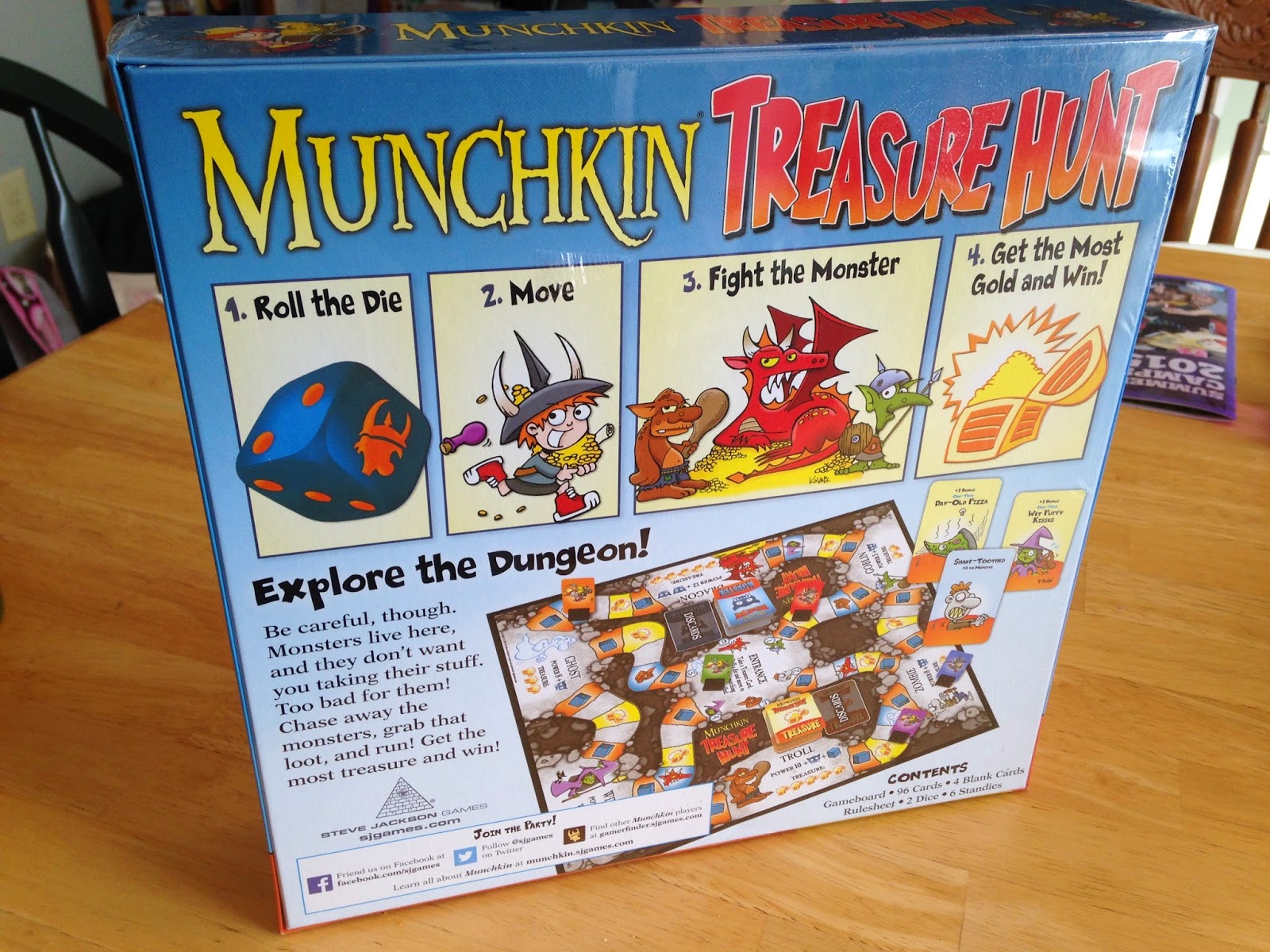 Munchkin Treasure Hunt. I finally found one. A bit hard to find, but thanks to my eagle-eyed 5yo, we spotted it in the games aisle of Toys R Us – which has exclusive rights to sell the game. 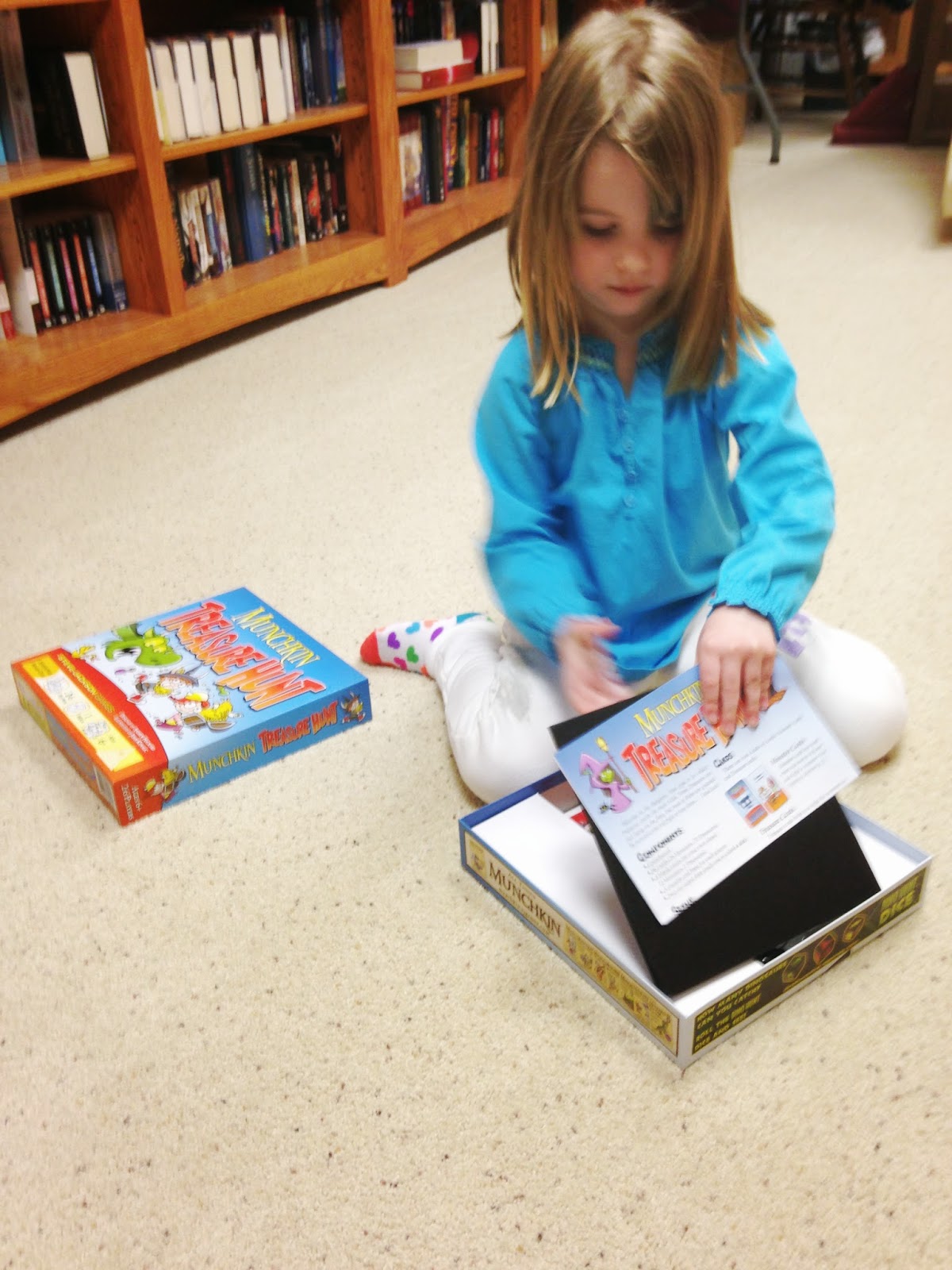 It was smaller than I figured it’d be. That wasn’t a problem, but it did throw me when I went looking for it. Technically, it could have been smaller still, since the board is much smaller (at least 2-3″ shorter then the square box) on either side; that might have been handy, actually, since it’d be easier to pack away.

Unboxing and setup were a snap, though the bases for the figures were a touch on the too-large side, and some might easily come out. There’s so much room in the box, though, that it would be a trivial thing to glue the bases onto the stands permanently, no harm, no foul.

The play of the game is simple. Roll a die, move spaces, and either do nothing (blank space), roll again (a colored die space), pick up a random treasure (treasure chest space), fight a monster via teleportation (monster space), or traverse a room, in which case you fight the monster in that room. 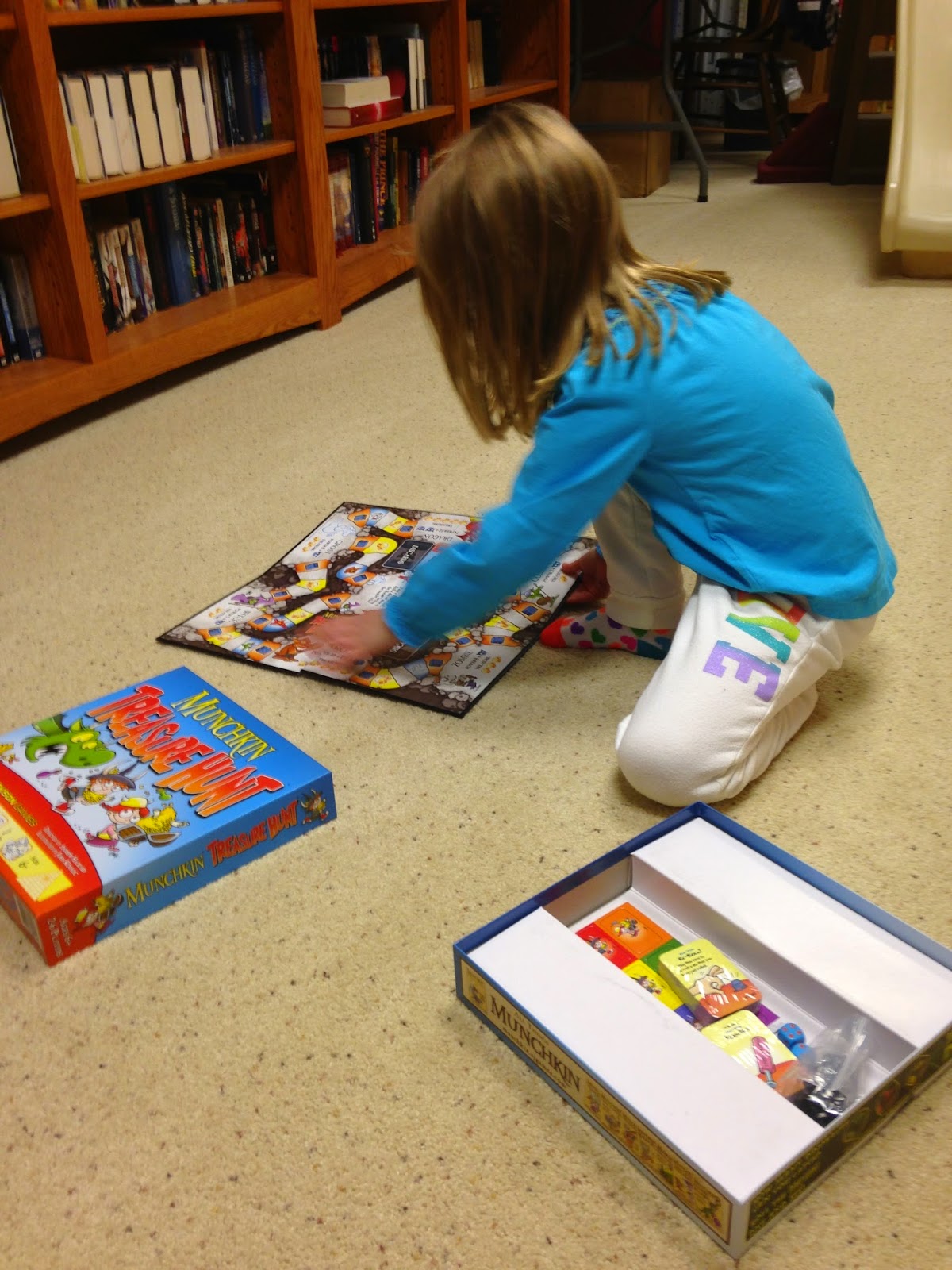 There are only six monsters to fight, which means there are no real surprises (not a bad thing since I was playing with a precocious 5yo). You have a base power, and you add one or more draws from the Monster Card deck, and possibly a die roll. Then you take your own die roll or rolls (you might get cards from the treasure deck for that) and any extra bonuses you can get, and if you equal or exceed the monster’s total, you win and draw a bunch of treasure cards.

These are the skills that were apparent to me 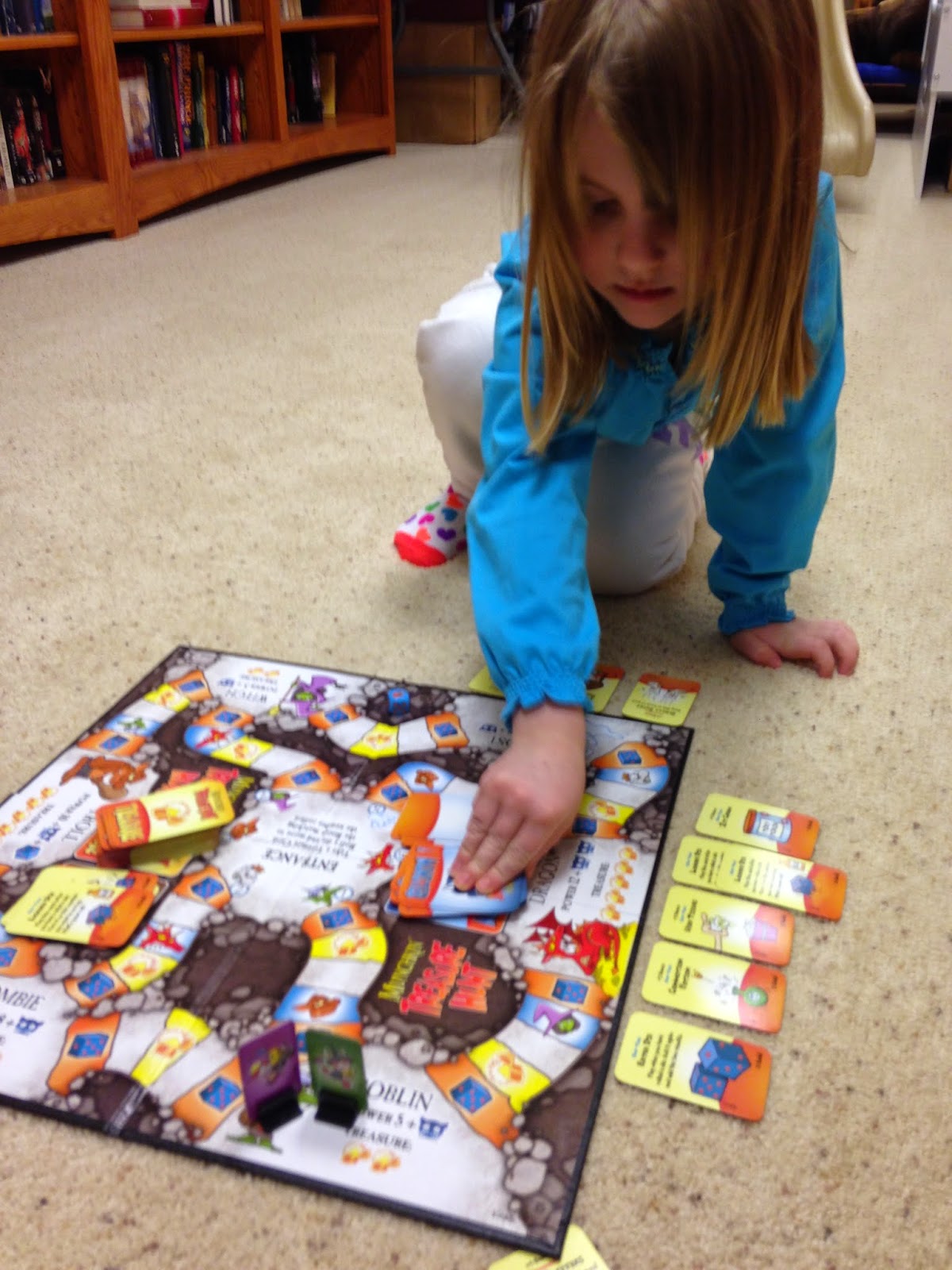 As promised, the game lasted for about an hour, though we weren’t rushing nor were we lollygagging. The game ended with a draw: 49 gold each.

The short version is we had fun, and my daughter enjoyed fighting monsters, and was jealous of my giant really sharp sword (or whatever). She built up a commanding advantage in Permanent items early on, and basically got all of them, winding up with +6 in permanents “in play,” and nearly all of the other ones in her hand. I got two +1 items, but wound up with a lot more valuable one-time cards.

She can add well, but the board and cards distracted her. So I had her close her eyes, and her “math facts” popped right back into her head. She very, very much wants to roleplay with me (score!) one day, and started by asking “is this a board game of roleplaying?” to which I replied “yep.” 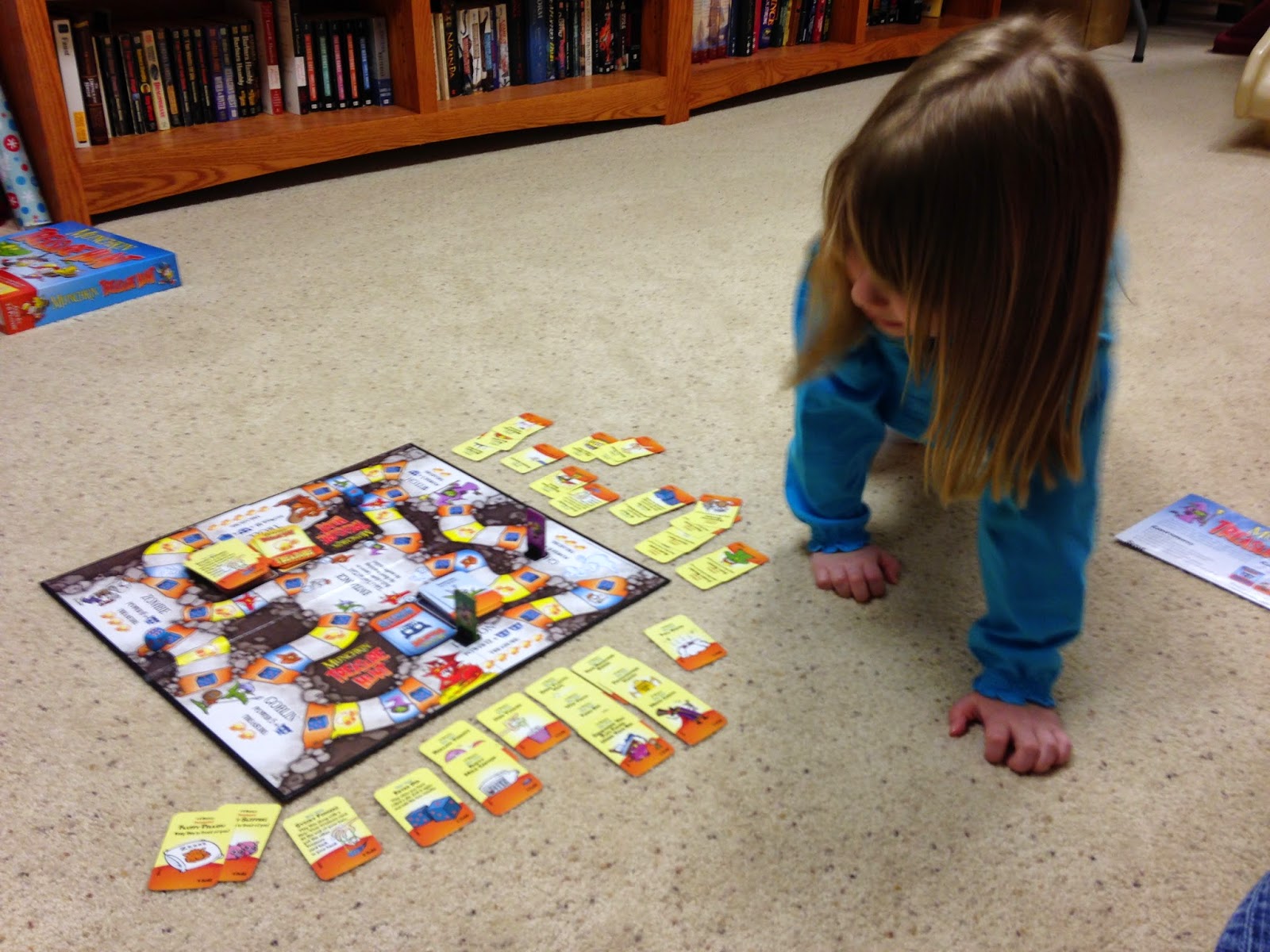 With only two players, it’s easy to drive a commanding set of cards and powers, since you’re basically working through the deck and there are no limits to the max cards you can have in your hand (a good choice).

There is also no real downside to just laying the cards out on the table; the game doesn’t end when you get to Level 10 or 20 or whatever, and the amount of help you can get from others is limited by proximity (they have to be within six squares of you). You also don’t play cards to help the monsters, so there’s no real surprise value to keeping them hidden that I could tell.

This is a game that can be used with real success to teach simple math facts, structured turn order, and of course the wonderful +John Kovalic art and amusing descriptions (+5 “That Look from Mom” was an instant success, as were the +5 Full Diaper and the Wadded Up Used Tissue, which I think was a +2) provide the right level of humor for the age range. 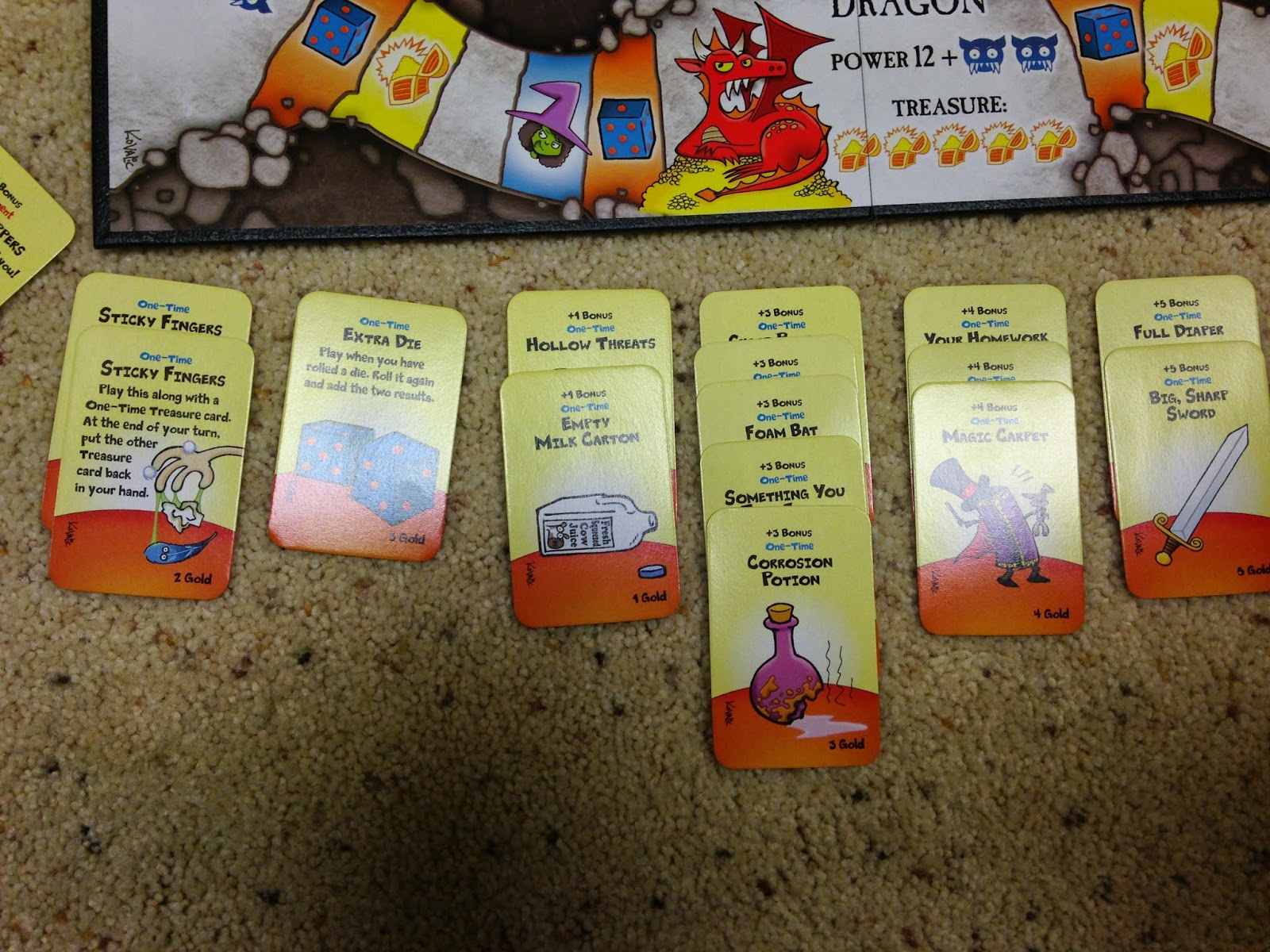 It would have been interesting to use 10-sided dice, though, if only for the completeness of adding 1-10 more than once, to give the full range of addition a chance. But there are so many “add a bunch of small numbers” together opportunities that I felt her math skills were appropriately pushed.

With only two players, the game rewards an early slow burn, followed by fighting as many high-level monsters as possible to eat lots of cards. Still, that can be risky and you can burn through a lot of your cards unless, like my daughter, you’re rocking 1d6+6 on every roll from the start. Wenchlet.

With many players, I have to think that the “good” cards will be much more distributed, and the ability to rack up enough bonuses to simply thrash the Troll or Dragon each time will be limited. That will drive more need for help, and a lot more running away. Both of us sought out fights as soon as we had the cards and points to do so, as you would almost always get more for the fighting than you’d spend. 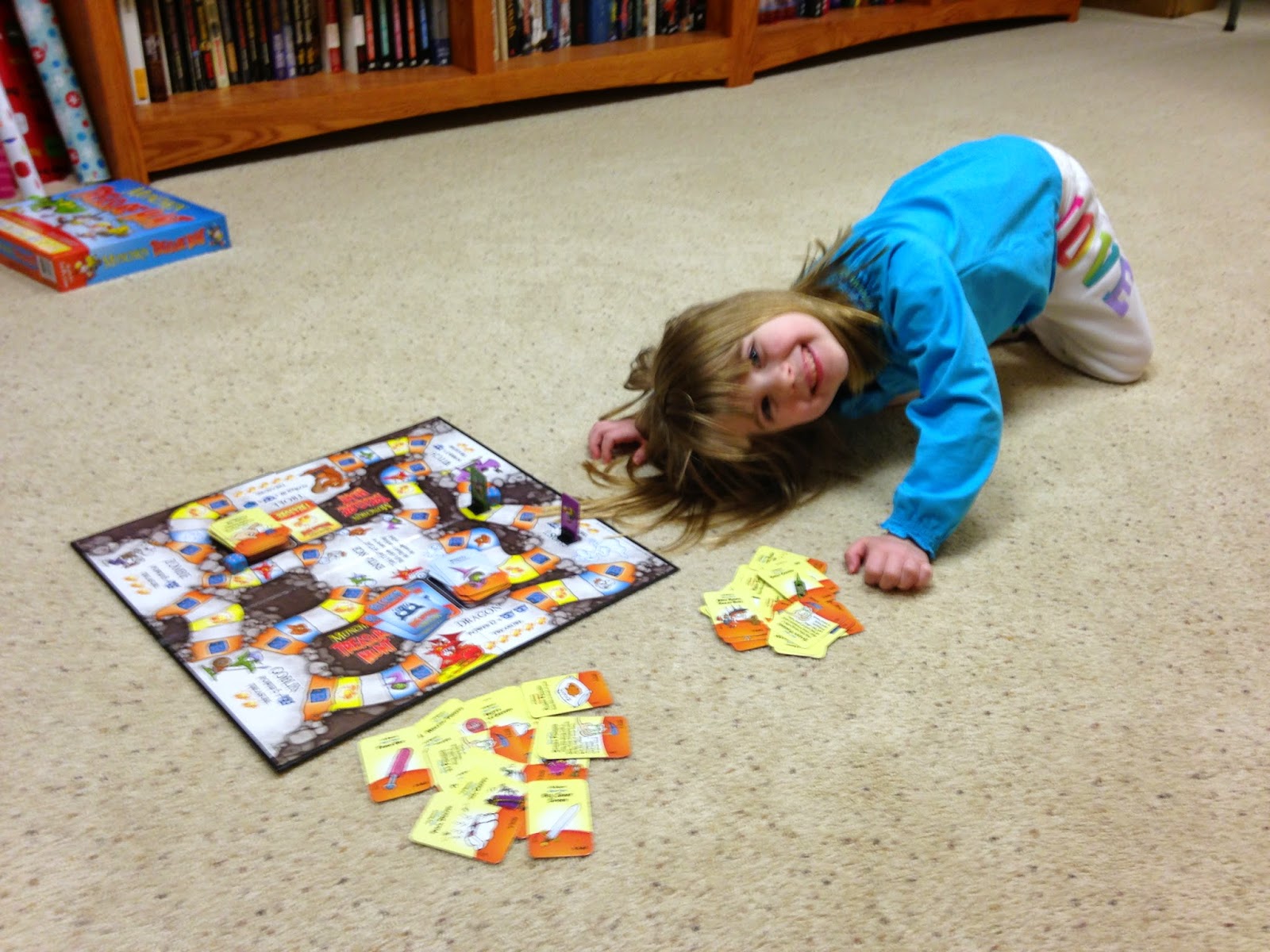 I see high replay value on this one, and it’d be an especially good game with 1-3 adults paired with the balance of kids. Certainly a larger number of slightly older kids could play, and the absence of anything brutally cutthroat like the “buff the monster” behavior found in the Munchkin card game means the odds of table-flipping or tantrum behavior are somewhat limited.

A good time. Glad I got it, and I’m sure my daughter will ask to play again.

The Words of Short Stack Herself:

So how about we ask my daughter what she thought?

What was your favorite part of the game?

Tying with my dad at the end.

Did you enjoy fighting monsters?

What did you think of the math? Was it hard?

Cool. It was not hard at all.

If you could make the game better, how would you make it better?

By being able to answer [the math] right away.

Would it be fun to play with your friends? Why?