This may be a short post. My newly-made Paladin charged into the opening fight as per his “seek out the baddest guy” custom, and got nailed for a crit for 4d8+2 damage, for 22 points. That brought him down hard from 38 hp. Several misses later, Mark (my guy) gets hit again for 9, though he was healed in the interim for 9 HP as well.

He’s missed twice, but the third time, he connects, and expends a spell slot to do an extra 2d8 damage, for a total of 3d8+3, and he rocks in for 23 HP. That sounds like a good plan for the future, then. Gotta take this guy down before things get horribly out of control.

The rest of the guys are engaging the soldiers – all of whom seem tough. High armor class of 16 or more.

Sidwin the Sharp – I think is an orc or half-orc, we started in media res so Mark isn’t sure – slides in behind the big guy and eviscerates him with a backstab. Whew.

The miners that were around the campfire continue to run, and Keyar Nailo misses with a rapier stab. We continue to make slow, steady process, knocking down an orc here and there, and they have to make a morale check, only DC 10, but two flee anyway.

I think that leaves four active foes. Mark runs up behind one of the uninjured orcs, and nails him in the back for 10 slashing damage (he got advantage due to facing). I can see this character is going to need a lot of healing though – this “my calling is to be where the fight is hottest in the defense of the good and the weak” thing is going to damage my calm a lot.

We continue mopping up, the higher level characters taking their toll, and the field is clear enough to start picking up stragglers, and Mark kills the last fighting orc.

Kayar and Mark both shoot at the fleeing orc, downing him. Sidwin goes and drags him back to stabilize him for questioning.

Of the miners, we save four of the miners that were wounded. So two dead, four wounded, six robust and unharmed.

The miners are perhaps predictably, grumpy. Rewards are promised if we can get them to safety. They claim they cannot go back to Phandalin; they’d be arrested by the town leaders.

Halia is the leader of the miners; she’s the foreman and a worshipper of Set. The miners are pleased with their treatment, but the Mitrans rand them all out of town, and captured Halia.

And some inter-party strife. The overlord has been bleeding the city-state dry, worshipper of Set. The priestess of Mitre that was journeying with me declares against the overlord, and Mark Bludiell is on the side of justice and light, as befits his station. 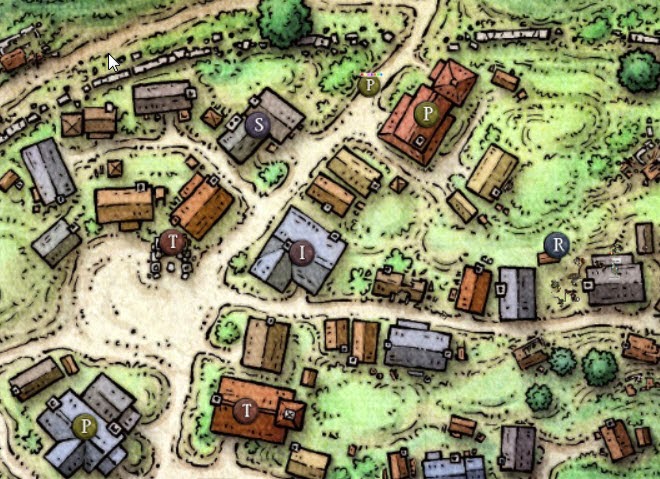 Much politicking happens that frankly goes by a bit fast for me, and we split the party, I think, and head to Phandalin. We push through the barricade manned by two weak-minded commoners. The Paladin brushes them aside (Mark rolls badly, the barricade soldiers roll worse) and we continue, eventually meeting a Priestess of Mitre and two merchants.

We return Gundrin to the merchants, and note that our fellow party members are escorting a group of miners to the manor house. They ask if we’re from City-State or Dracolindes.

Draco-what? We don’t know either.

We find out that the Sheriff is in Tain, and that sounds like a bad thing, I think.

Markbludiell gets some dents pounded out of his armor from the previous fight.

We switch scenes, and the PCs come up to the manor house, and a knight in shabby, unkept armor is riding towards them with two companions. It would seem that all representatives of the City-State have been bad guys.

“Well, look what the cat dragged in. State your business here,” says the Knight.

The miner goes up to the Knight, and shows him something – the High Elf Keyar sees the exchange, and watches the Knight all of a sudden give the miners the Shepherd Book treatment. “Get this man to the infirmary at once!” and whatnot.

We discuss the politics of the situation; we’ve endangered, perhaps, one of the higher ups of the Black Lotus, a spy network. They decide to march hard to Phandelver in order to warn the town that minions and armies of Set may be descending on them.

They return to Phandelver/Phandalin, and run into the same barricade that Markbludiell and the priestess passed earlier. They greet them, “your friends passed earlier with Gundrin!” and are very jovial and welcoming.

The barricade is explained as a reaction to the City-State being under control of the Church of Mitre. They’re kicking out the Settites and taking control themselves. They’ve locked up the reeve, the miners were driven out as allies of Set, and Halia is in jail, etc.

They asked if they got glassstaff? No, they didn’t. They got the drowning black spider, but not the glass-staff.

They send ’em down to the Stonehill Inn, where the Paladin and Priestess are kickin’ for dinner. The village seems very friendly, and there are about six guys with spears roasting sausage outside the inn. There are probably 100 or so, total, poor excuses for soldiers pretending they’ll make a difference.

The rumors are sweeping across the town that the Overlord Dracolindes, whose patron is Mitre, they say, has taken over the City State. There was an acolyte from the Cathedral; the Duchy of Darkmead is rising as well. Two more allies, and they’re unbeatable. Etc, etc.

We gather around and speak a bunch more; those with Investigation look into the Halia issue, trying to piece together anything coherent from the overall story. Does she have papers and notes?

I had to go at that point – a conference call in 15 minutes, and an emergency laptop issue.

But wow . . . the Majestic Wilderlands is a dynamic, complicated place to adventure in. Youv’e got countries. Territories. Wilderness. Cities. City-states, each with their own geopolitical stuff going on. Plus the conflict between Set and Mitre . . . or at least, the political conflict between two religious factions, and then there are the layers which may or may not be related, such as whether the Dracolinders guy is actually “rah, rah, Mitre” or he’s playing his own game.

This is so very different from the “beer and pretzels” games I’ve played for a while. I have to pay attention carefully, and I don’t even know who the PCs really are yet! I’m feeling like what I need is a mind map of all the factions. This is probably something +Liz Theis‘ Realmworks might be good at. I wonder if I can/should try using my copy to take notes on this place?

Something needs to be done, though – I’m drowning in the detail.

It didn’t help that my own PC, Markbludiell (or Mark, or Mark Bludiell – his identity other than as a Paladin, Chosen of Veritas isn’t that important to him) is still nascent. He’s got some backstory written by me, and another large bit of text that was provided by Rob – but I haven’t integrated all of that into his background, personality, story, and motives.

Hell, I don’t even know what he’s been Called to do, but Paks had that problem too, so I’m not that worried. But in fiction, the characters can be led around by the Hand of God pretty solidly and no one minds. The shared experience of RPGs means I have to be more proactive – seek out The Injustice or whatever the divine mission is, and hit it with a sword a lot. Or whatever is sovereign for the task at hand.

In any case, I think I have homework to do.

Finally, we got about 440 XP for the adventure, which I’m told isn’t bad. At that pace, it’ll be 2-3 more sessions until 5th level, and from there I think 8.000 or so more XP until 6th level, which means a dozen or two sessions per level. So I better get used to this power level for a while. Perhaps.