I’m a bit exhausted from the run-up to GURPSDay this week, but here’s something that was inspired by a fun game last night.

last night I played in a game with a bunch of people I’ve never gamed with before. +Derrick White was gracious enough to accept me into his game.

It’s a neat premise – people from “right now” Earth are recruited by aliens in a TL10 society to fight people they won’t fight, kill people they want killed, and steal things they want stolen. Pretty much the very definition of murderhobosim, but this time, the Alien masters command us!

We started in media res, and my character is an army drill sergeant, Robert (“Bob”) Wane who was an unarmed combatives teacher, whose leg was shattered and some of his class killed in a car wreck on the way to a grappling tournament. He had to retire, but the alien recruiter got to him, fixed his leg, and put him to work.

Precis – How does one take the time it takes to figure out modifiers and steamroll right through it?

His quirk – which is tons of fun – is he’s always talking trash about “that time in boot” or “when he was in combat” that end with the most godawful ridiculous stories ever. I get to make up crazy, crazy stuff and say it in character. Owing to Roll20 not taking my mic input last night, all of my stories wound up in text chat, where they’d sit like unexploded grenades until discovered.

Anyway, there wound up being a lot of grappling in the game last night. People’s armor was too good for the low-grade slugthrowers we brought (well, most of us; one smart person brought a Heavy Laser Pistol) and so it came down to force swords, vibroblades, and grappling (again, because striking DR 45 armor is pointless).

There were a lot of Quick Contests involved, and one Regular Contest (for a pin, naturally). At one point, we started down a discussion of how many hit points a floor of a high-tech elevator had because Sergeant Bob wanted to cut through it with a force sword. I more or less pulled a +Peter V. Dell’Orto : Just tell me if it’s awesome and so it works, or if it’s stupid so it doesn’t. GM ruled it was impossible, we moved on. No fuss. No rules arguments (Mark, Peter, Joeseph, and Christopher all have something to say about this). 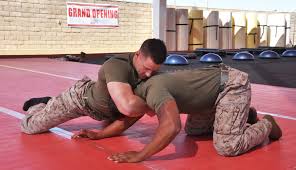 Anyway, one of the common causes of delays and rules lookups at the table is that while the basic GURPS mechanic is easy (roll 3d6 against a target, except for damage and reaction rolls), the hard part, relatively speaking, is determining a target.

For many of the things you do when grappling, and many opposed feats in GURPS, you basically make opposed skill rolls. It occurs to me that for games like the one we were playing, with skills often in the 8-18 range, you could probably get away with saying than any Quick Contest can be resolved with basically five levels of difficulty.

The whole purpose of the above is that it’s fast, relatively vague, but can be pretty satisfying because really, most penalties boil down to about that anyway. What about bonuses? Just hit the other guy with penalties. You can probably almost do the same thing for attack/defense. Halve the values on the defense (so What do you want to do? is -4, as if you were defending while stunned).

Combined with “range bands” of moderate width and you can bypass all sorts of fiddle, I think.

We had a fairly mixed group, including one guy who had heard about this whole roleplaying thing from a podcast he’d listened to, was curious, and decided to try out gaming. His first GURPS experience, I think, went well, and until he told us the story at the end of the three or four hour session, I might have said “he hasn’t memorized the GURPS rules” (no issue with that at all; nor have I), but I’d never had said “never played before.” He fit right in, and will continue to do so.

I got asked a lot of grappling questions, which since I was on text chat, didn’t take any air away from the game. It was about perfect. But it did occur to me that, especially with grappling but extensible to most anything, the limited number of mechanics in GURPS means you can wing it with pretty high fidelity. While I have a tendency to write pretty detailed treatments, I’ve learned pretty fast that “just roll and move on” has its charm, and supporting that style explicitly has merit.

I actually think there’s a way to tabularize this in a useful way to tighten up the time-to-dice interval where firearms come into play. This is key because of the very large number of modifiers that can be turned on.

Well, I know what I’m writing for next GURPSDay now. Bonus.