The .45 ACP was designed and adopted between 1910 and achieved “final” approval in 1911, when mated with the winner of the platform competition, the now-legendary Colt M1911. Adopted as a result of reported failures to incapacitate the enemy in the Phillipine-American War (the Moro Rebellion) from both the .38 Long Colt and the .30-40 Krag. A bigger bullet with a bigger punch was requested, and this cartridge was modified from a .41-caliber cartridge then under current development by Colt and Browning.

The basic inputs will be driven from the classic load – the 230gr full metal jacket round that formed the basic projectile more than a century ago. Fired from a 5″ barrel at 250fps, this is in many ways the standard against which all other bullets are compared – if that standard isn’t the 9mm. And if it is, the proponents of the .45ACP are willing to fight them about it.
Ballistic’s Calculator Inputs

The classic cartridge is the original one: the 230gr load which earns the standard GURPS stats of 2d pi+ when fired from the 5″ barrel of the Colt M1911. You can see that the half-damage range is healthy, and that barrel length starts to be substantial in order to eke out more energy from the round. Once you get past a 15″ barrel, you’re not helping yourself. At all. So in effect there are three practical barrel lengths for GURPS: 3.2 to 5″ are all in the 2d range. SMG barrels of up to 11″ will get 2d+1. And then carbine-length barrels of 16-18″ will do 3d-1. The intermediate 11-15″ range, while interesting from a GURPS perspective, seems to be a bit of a no-man’s land.

The default original cartridge was a full-metal jacket round. The modern tendency for self-defense pistols tends to be Jacketed Hollow Point, or JHP. These can have some impressive expanded diameters . . . but not that much more than the .40S&W, which makes it a non-issue to trade higher magazine capacity for expanded diameter when dealing with modern rounds.

The load chosen for the original was the original. But there are some interesting and impressive hollow-point loads.

From a GURPS perspective, though . . . the best you can get from a hollow point is pi++. Now, that’s impressive, but you don’t need that much of an expanded diameter to get there, so the really high expansions, while great (perhaps) in the real world, don”t buy you much. From that perspective, the “ultimate” JHP is going to be the highest energy load you can buy that ekes out the full pi++ when expanded. That’s only about 0.59″ with the 200 and 230gr bullets, and 0.60 for the 185gr. All of that means that the bullets on the list below all qualify for a “good” GURPS JHP.

Recall my model accounts for the JHP not with an armor divisor (in this case a multiplier), but a damage reduction for raw penetration. This basically means that any shooter worth their salt will carry JHP rounds at the full 2d out of a 5″ barrel, and they basically all perform close enough to the same that you don’t need to specify which one you’re using.

Not too many people seem to make high-energy FMJ rounds that aren’t mostly less than 100 grains, so cataloging them isn’t worthwhile. 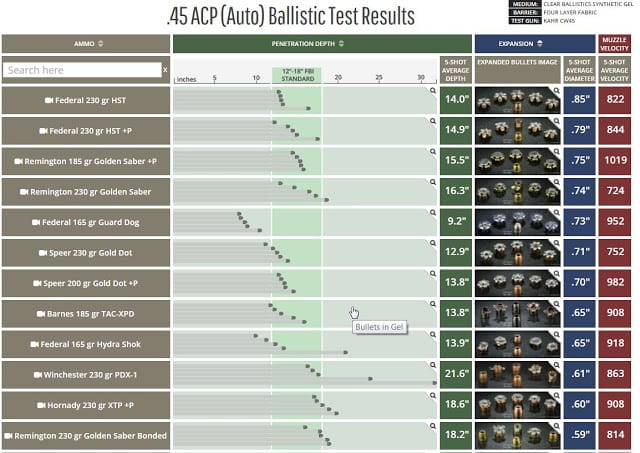 The number of .45ACP handguns is vast, vast, vast, but of course you have to start with the actual Colt .45 ACP, now updated as the Colt M1991. This venerable design is also built by a large number of custom pistol shops, such as Kimber, who adds plenty of quality at a reasonable price, and there are other custom shops that do fantastic work (for a high price). Les Baer, Guncrafter Industries, Wilson Combat, Ed Brown, and STI (whose pistols were given to Monster Hunter Owen Pitt as a gift).

These tend to be single-stack firearms of the original 7 or 8-round capacity. Larger capacity magazines can be found for those with suitably-larger hands. The Glock 21 held 13 rounds, and other double-stack magazines from 10 to 14 rounds capacity can be had for Sig Sauer, Para-Ordnance, and others. Some of these are available in cut-down versions with shorter barrels for concealability.

In the SMG set, the Kriss makes a unique SMG designed from the ground up to be ridiculously low recoil, and the inevitable H&K SMG – the UMP chambered for .45ACP.

And of course, the original .45 Thompson cannot be left out – both in “gangster” configuration with drum magazines, or the military issue SMG seen in Saving Private Ryan and other movies with stick mags.