After the discussion on how to kill someone dead in GURPS with firearms (which really does devolve to shoot ’em a lot in places that matter, more or less like real life), a few commenters noted that “dead in one turn” isn’t really where it’s at. +Peter V. Dell’Orto has noted before that dying, in GURPS, is surprisingly hard to do, and really, the point that a fight is won is when the enemy is either incapacitated or cowed, not annihilated.

So, what is that point? Well, it’s a failed HT roll for consciousness, for the first. And that can start to happen as soon as you have zero or fewer HP left (p. B380). Hmm. That’s not a lot, especially since you get a lot of help on your way there.

I’m going to assume a slightly above-average foe of 12 HP instead of Joe Average with 10 HP. 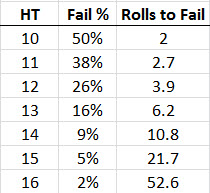 Let’s start with the obvious, and a good follow-up to the death post: what if you get shot in the vitals or skull?

Vitals: This one’s a straight-up x3 injury multiplier, bullet size and other factors notwithstanding. Any projectile that does at least 4 points of basic damage (about 1d or 1d+1) will qualify for a one-shot ticket to a HT roll. 2d+2 gets you there even on a minimum roll . . . and that’s a bog-standard 9mm pistol.

Actually, to a HT roll every second. As shown in my post on The Price of Fitness, though, it can take a while, depending on HT, for this to matter enough for the law of averages to catch up to you. Many GURPS combats might only take five or ten turns to resolve, since there’s so little incentive to chill out for a few seconds. But by and large, foes in the HT 10-12 range (effective; if you’ve got Hard to Subdue, Fit, or Very Fit, you get bonuses here) can expect to drop KO in four or fewer turns. More problematic are the HT 13+ types, since at HT 14 and higher, odds are your foe is up for 10+ turns.

The other piece of goodness here is the Knockdown and Stunning roll at -5 on suffering more than HP/2 injury to your vitals, which for our case is 7HP or more, and that’s 3 HP of basic damage to the vitals. It’s hard to not do that much damage, and this KD&S roll, in the event it’s failed by 5+, still causes unconsciousness lasting at least 15 minutes.

Skull: In addition to the usual nifty multiplier for the skull injury of x4, there’s the added benefit that any blow can trigger a KD&S HT roll, and a major wound renders this roll at -10 to the skull or eye. This is going to challenge even the most hardy (high HT) foes.

The skull’s DR 2 means that to get that major wound, you need to still hit for 1d+1 (again, not hard), and 2d+2 will always do it. 3 HP through the skull’s DR puts you in KO territory, and that’s 1d+2 as well. The fact that nearly any wound to the skull will trigger a major wound HT roll at -10 means that even uber-guy at HT 14 is going to be stunned unless he crits, and will go unconscious about 2/3 of the time (he has to roll 9 or less to avoid being KO’d, and 4 or less to avoid being stunned).

Once he’s stunned, he’ll be up in a jiffy if he’s got high HT, but at least you’ve bought yourself some time, either to Aim at his fallen form, or to shift targets, buying you some respite.

Torso: The most frequently shot-at target because it’s the easiest to hit, and range penalties stack up faster in GURPS than any other type. The thresholds are harder to achieve because of the multipliers:


A single shot from most 9mm pistols or SMGs won’t get you there. Most .40 or .45 SMGs will, however. Any carbine at decent range will do it, but long range shots with assault rifles (which turn to pi- when the velocity drops below about 600m/s) will not.

That all being said, if you have a problem foe that Just Won’t Go Down from that 1 HT roll per second, well, you’re going to have to shoot him a few times. It’s exactly this sort of situation that makes people invoke Mook rules, where bad guys automatically go down after hitting HP 0.


This will only be a big deal on the scale of minutes, even if using fairly harsh house rules. 15 HP of damage to the vitals (or really, 5 HP, x3 for vitals) is something like a HT roll at -3 every minute. Unlike real life, where blood loss is a real thing that incapacitates people, in GURPS it just ain’t all that.


Tactical Shooting is a great book for many reasons, but one of them is that it has some really fun rules for fright checks. If you suffer a hit or even a near miss (miss by 2 or less), the GM can require a fright check from the victim, which might stun him, or at least force him to immediately seek cover. This is something to look for, adding up the appropriate modifiers on p. 34 of that book, and worrying about it if the Will rolls are going to be made at (say) 16 or less. If with all modifiers, the foe’s Will is 17 or higher, I’d only make a roll in special circumstances.

This fear of being shot, or seeing friends and loved ones being injured, is responsible for a lot of the tremendously poor performance under pressure relative to that on the range.

It’s way, way easier to render someone ineffective in firearm combat than it is to kill ’em out right.

GMs should take note, though, that if they stack up HT, Hard to Subdue, Fit/Very Fit on their bad guys, they only have themselves to blame if their foes stay up like a Horror Movie villain.