I’m going to try and keep this short and disgruntled.

I’ve got Drop Caps that I’m using for ID’ing part of a new adventure. I have asked, and the author complied, that all of the room numbers for a programmed adventure have three digits in them. I used a Paragraph Style and set the first three letters in the style to drop cap by three lines.

That gave me this

, which was unacceptably tight. Ignore the crap font for now; I wanted the numbers to stand out, and tried the same font as the title. It doesn’t work; not readable enough. But the different font will be important later. For the record, it’s called “Rebuffed.”

Next, I treid a bunch of other things, including what was most-recommended on the net, setting a linked Character Style to higher Kerning. A LOT higher. That not only spaced out the drop-cap, but it made the character spacing unacceptably wide for the room numbers. So no joy there.

I tried something else, and while I got good spacing, it inexplicably dropped the room number

. I still have no idea what caused this. At all.

Finally, I found that if I manually first deleted, and then inserted a single space between the large number and the following text, I could highlight that space and adjust the Kerning of just that space. That works.

So all is right with the world for now.

There are a LOT of tricks to do fun things with a single drop-cap letter. Fewer that I could find with a drop-cap string of things. A lot of the “fixes,” which will 100% work, are to take your drop-cap target and cut it out, then paste it back as an anchored object. This is a pain in the rear to do 193 times, but the formatting choices you will have are much larger, as you can use the very robust Text Wrap features to control formatting. In fact, what I’d appreciate in InDesign quite a bit would be if the Drop Cap function did exactly that: it pulled each targeted letter out of its string and pasted it in as an anchored object with the proper settings automatically, creating a Paragraph Style and Character Style called (say) Drop Cap Style 1 and Drop Cap Character Style 1. That way you can independently format the drop-cap and the following text more easily. You can still do it, but one must be careful, or you get the weird behavior in my middle example without changing any of the settings. I mean, I’m sure what’s happening is my fault; the computer is just following instructions. But something changes and it’s not always something I know how to fix.

Anyway, that’s my “struggling mightily with InDesign” layout lesson for today. Hopefully it’s useful to someone. 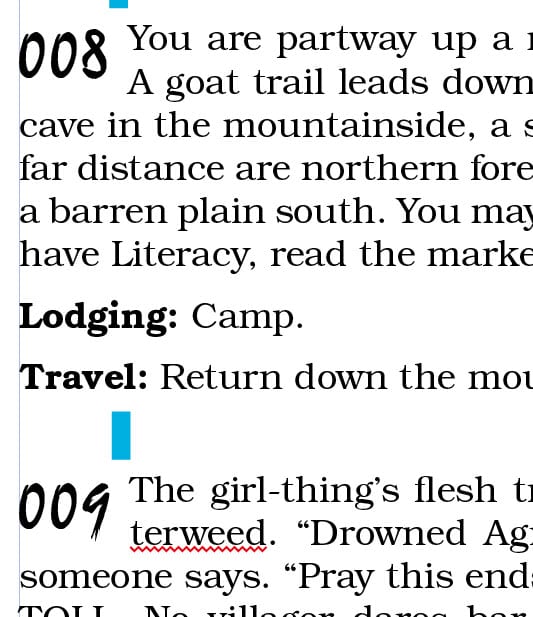 Another quick use of GREP

The key thing here is the $0, which is InDesign for “grab whatever you just found.” The equals signs and greater-than sign are actually what I get when I paste the graphic that Michael built in to my template.

What that does is find every instance of my Topic Paragraph Style and selects the entire line. It rewrites the line exactly, and then adds the graphic afterwards:

Since once one determines this works, it takes seconds to make the switch, being able to do things like this is a big deal.

There’s still occasionally some formatting I have to do. But by and large, this sort of thing is a ridiculous time-saver for things.

No way ’round it. They’re annoying.

But . . . one thing I found out the hard way is that working with a table there are several different ways you can do it, and they’re all different, and all needed.

This next one was the big reveal for me

This was a huge deal for me, because for whatever reason, I kept having my tables offset from my frame, which meant that lining up the frame with the columns did me no good.

Working with InDesign is subtle. It’s like a Wizard that way, and the program is quick to anger, and publishers apparently taste good with ketchup.

But I was able, with a bit of consultation from Michael and a lot of “Oh. Oh! OH!!!” moments over the weekend, lay out in good form the entire non-monster portion of the Dragon Heresy Introductory Set. 150 laid-out pages for about 94,000 words.

This is a huge deal for me. It probably means that at worst, the intro set will be 272 pages, which is more than I’d like but not crazed. If the new monster format I worked out with Michael comes in at 550 words per page it means the thing will nicely fit into my original 256-page “shoot for this” scheme.

If I can hit the same word density as the first bits I’ve laid out already, we’re on target for 240 pages, which is in my mind the ideal target. But really, anywhere between 240 and 256 works for me.

Next up is collecting all of my existing art assets in one place and seeing what art holes naturally exist in the document. I didn’t purposefully add any, and removed quite a few. I’m violating some layout rules in the Intro Set to keep page count down. But overall, I should be able to use and re-use most of what I have (and some is original to Dragon Heresy in general) and keep things restrained.

That means I can probably Kickstart the thing in April. Watch for it!

Last few days or a week or so I’ve been laying out the Dragon Heresy Introductory Set. The manuscript is done, cut down from 410,000 words to about 149,500, and 55,000 of those are completely awesome monsters.

But InDesign, basically the industry standard layout package, is a CAD program for words. It is ridiculously functional, but what it is not is a word processor. Certain things, like “line spacing,” are not really things in layout. Oh, they exist, but line spacing is all sorts of things, mostly “leading,” (named for the strips of lead placed between lines of text), but there’s space before, after, during, around the side . . .

First, columns and frames. I didn’t like the way my spell lists were coming out. I wanted it to be more clear what spells were what level. It took a lot of manipulation, but I finally got it. 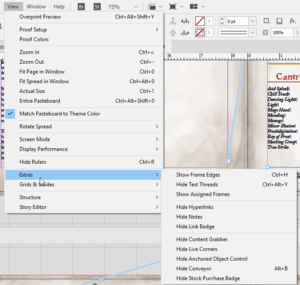 To solve the presentation issue, I wound up having to create at least three to five different frames. It took a bit to get the size right. The only way I could rationalize it all is to keep the text thread viewer turned on. That’s the blue lines that connect how the text flows from frame to frame. Out from one arrow, into the other. Whenever something wasn’t behaving right, keeping this on solved the issue two times in three for me.

(Note: whenever it doesn’t work, it’s my fault. InDesign doth not guess what to do. It does what you tell it, even if you tell it wrong.) 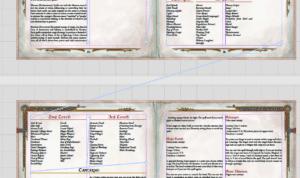 So turn on Text threads from the View–>Extras–>Show Text Threads menu stack, and you’ll see blue lines (mine are blue, anyway). They help.

My second issue was poor spacing for spell descriptions. Words are pages, and pages are money.

I started with a poor spacing issue, probably because my No Spaces style in Word did not import properly into the RTF when I round-tripped the file to InDesign for style cleanup. 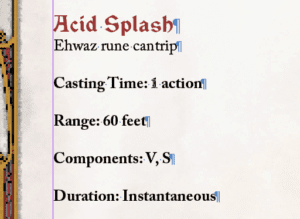 So I had too much space in the spells.

It was a slog, but eventually I figured out how to fix it. I made a Character Style called Spell Statistics with the leading set to 50% instead of 120% of the character font size. I then used Find/Change (CTRL-F) and the GREP function in the menu with this command

That selects everything between the lead-in word Range: (with the colon) to the forced line break/paragraph mark (\r). For the replace, I replaced the existing character style with Spell Statistics. Click Change All, and boom – 104 replacements in a matter of seconds.

Repeat for Components: and Duration: and it was all done.

Hint 3: Round Trippin’ Across the Universe

The final bit is a commonly-used tactic to clear out the copious amounts of crap from the Word styles menu. Short version, Place the doc file in its own new text frame in a brand new document, with all other documents closed, just to be sure. Ignore that it will overflow the frame. Click in the text somewhere (this is important) with the Text tool, then Export. It will come up as RTF, and you re-save your file this way.

Now, close everything. When you Place into whatever your working document template is in InDesign, and you do Style Mapping, ONLY the styles you use in your document are going to come in. In fact, I might have even lost a few (see above). But I once had 83 ToC entry styles and if you don’t exclude them, you have to map them to something (or nothing) one by one, which is irksome.

Nothing New Under the Sun

These hints are not me being original or clever. I found tutorials on the web, or talked to experts, or (with the particular GREP thing) used a google search for regular expressions to find the right wildcards.

But they helped me, and so I record them for posterity’s sake.