Over at the GURPS Forums, there’s a really interesting (well, interesting to me) thread asking the question if basic melee weapon damage is too high (what you look up on p. 16 of the GURPS Basic Set).

I think the answer is “yes.” In fact, as part of my “Armor Revisited” article I had originally written about a page explaining why, how, and how I’d fix it. But I cut it out since it opened up a few cans of worms, potentially, that didn’t need opening.

Still, it was Just Sitting There, so I posted it on the forums, and now I post it here (this will make my musings in Part 2 of this topic a bit more cogent, I hope).

I note that JCurwen3 posted that he used it in his games, and finds that whatever cans were opened, they might have been more Whup-Ass than worms.

While firearms are explicitly on an energy-based scale that doubles penetration for every quadrupling of energy, melee weapons do not scale this way, and the raw damage rises much faster, making high ST unrealistically effective when applied to hand weapons and muscle powered ranged weapons.

For an alternative take that scales the same way as firearms, consider rescaling thrust and swing damage. A cinematic scale would have thr equal to ST/10, and swing equal to ST/5; a more realistic one might have thrust as ST/20, and swing as ST/10.

Roll one off-color die, and adjust the number rolled to the table value. The Notes entry shows where rules of thumb can be used to more quickly interpret the roll of the odd die. Each entry is scaled to give an average result consistent with a fractional d6.

Using the “realisitc” scale with ST/10 for swing damage has many repercussions, which must at least be considered before adopting these rules.

ST is “the attribute that you use to buy damage” in GURPS, with a healthy side-order of “lifting heavy stuff” and “more HP.” The realistic scale requires ST 20 to do 1d thr and 2d sw, and probably calls for a price break. HP are 2 points each; Lifting ST is 3 points per +1 ST, and Striking ST 5 per +1.

HP and lifting are as valuable as ever; reducing Striking ST to 2 per +1 ST in realistic campaigns, with overall ST at 7 points per +1 ST, seems appropriate.

Weapon damage is lower, and thrust weapons in particular will have limited penetration capability. This takes what was the historically preferred method of punching through heavy armor and nerfs it further. To compensate, add a (2) armor divisor to weapons with a sharp, narrow penetrating surface. Consider optionally allowing a still more impressive construction, buying a fine (hardened) penetrating point that gives a (3) for ¥4 cost. This would not be available for arrows (see The Deadly Spring, Pyramid #33, for suggestions concerning bows and arrows).

With most hand weapons using the realistic scale, personal armor just got a whole lot more valuable at low DR, especially using the revised armor weights from GURPS Low Tech. This isn’t a bad thing; in fact, it might make a campaign world more closely resemble what we know about our historical real one . . . on didn’t need to lather on 80 lbs. of mail, leather, and plate to protect against basic cuts from swords, or long-range shots from flight or hunting arrows.

With thrusting damage at ST/20, and swing at ST/10, there will be very little differentiation between average, fairly strong, and even very strong characters. Weapons rated at sw+2 or sw+3 (maces, axes, and falchions, for example) have their damage almost all defined by the weapon, not the user.

The changes to melee damage on the realistic end would bring GURPS damage on the hand-to-hand scale more in line with firearms damage. For a character to do as much damage with a punch as with a 9mm pistol would now require about ST 52 . . . well into supers territory. Even a strong character with ST 20 (1d thr) will be out-penetrated by a .22 LR (1d+1 pi-). For those who want a more realistic scaling for penetration, this may be more satisfying.

FYI, this space will change without warning for a while, until I figure this stuff out. I’ll likely be stealing shamelessly from Dungeon Fantastic, ’cause it’s awesome.

Today while doing a home improvement project I had occasion to walk around the house with a dueling version of the venerable “Ten Foot Pole” from Dungeons and Dragons.

Well, not too much – the pole was nine feet long.

Boy was it a pain in the butt. My basement has ceilings that range from seven to nine feet, with nine being the distance, MAYBE from concrete to up inside the joists.

But to wander around with such a thing? In anything resembling a real dungeon? Icky and annoying.

Heck, I self-imposed this on myself while playing Cadmus, my character in the Pathfinder-inspired GURPS Dungeon Fantasy campaign I play in on Tuesdays. He’s an axe-and-shield guy, but I wanted him to also be skilled in a long weapon, and so I chose a dueling poleaxe, with spear, hammerhead, and pick. But realistically, a Reach 2,3 (6-9 foot beyond the 1-yard hex he’s standing in)  weapon is just unwieldy. I kept making jokes to the GM about “can’t I have one of those Highlander polearms, that you can just procure out of nowhere and that doesn’t encumber you at all?”

GURPS gives Bulk ratings only to ranged weapons; Holdout penalties in the Basic Set come close, but top out at -6 for a “heavy sniper rifle,” and a bastard sword is -5. A longbow, which is going to be six or seven feet long, is -8. I came up with a formula (as I always do) for Bulk as a function of length for The Deadly Spring (my article in Pyramid #3/33) making Bulk equal to 9 – 9*log(weapon length in inches). If you have a crossbow, add the length of the bow-part to the length of the stock. So a 9-foot pole is -9, and a 10-footer is -10.

If you apply this (or some fraction thereof) as a penalty to DX to move around with the damn thing, especially in a hurry, well, given how many times I banged it into the ceiling, it reality checks well.

Why will anyone care? Mostly, gaming stuff. I’ve got a few things in Steve Jackson Games’ Pyramid, one “real” e23 supplement on the way as soon as the Big Damn Ogre gets out of the way of the publishing queue, and it’s Just Fun to muse about games.

Bear with me as I get this blogging thing figured out, and thanks to Dungeon Fantastic for leading the way. 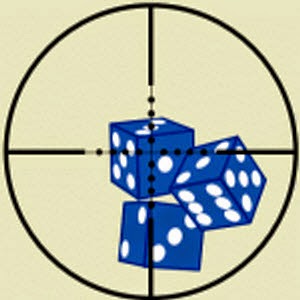