We more or less talked our way through the session, trying to remember where we’d left off. In the end, we captured a target pirate we’d needed to capture, brought his severed head back to Tidewater Rock, and took over the place by bargain and threat. 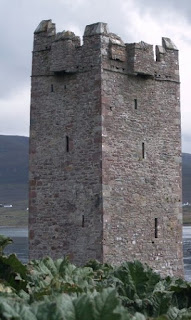 We now have two ships to our name (and renamed the second ship, with great irony, “A Simple Plan”, and the desire to fortify and improve Tidewater Rock as our base of operations. The “keep” on that place is more of a tower, and it’s pretty sparse for fortifications, supplies, and the things that would make it a viable base of operations.

So, we are now, I think, on a major deviation from the Adventure Path (though maybe not), and we’re hooking up with some NPCs we befriended (or at least didn’t rob, kill, or both) in our past, looking for a smith, a shipwright or three, and some engineers and masons to help turn our little island into something to fear.

And if that isn’t fun enough, we discovered Google Goofiness. So from now on, I think at least a few of us will be using Roll20 and the associated plug-ins to ensure maximum piratical behavior.

I’m “Pel,” on the left. Makes me want to grow my goatee back.