A while back, I posited that pretty good results can be obtained by assuming that the Vision bonus for “in plain sight,” that is, +10, applies fairly generically. Certainly it’s a good starting point to see what you can see.

But what constitutes a basic roll? A Vision+10 roll for Joe Average will spot something man-sized on a non-obscuring foreground and background about 50% of the time at 100yds.

But how long does that take? Is it one second? Ten? A split glance?

Further, Stealth, Camouflage, and other skills, plus natural concealment will impact the roll

This type of thing is likely to come up in Alien Menace, among other things, so I’d best think about it systematically.

What’s the base time for a Vision Roll?


I’m going to assume that the base chance to notice something means you’re taking a pretty good look. So an Evaluate maneuver. 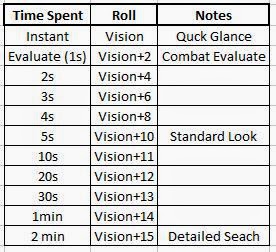 A very common use of Per rolls is in combat, though – what you might call “instant” use, which is -10. OK, that works out fairly well. Makes it a flat Per vs. Whatever roll – you get the “in plain sight” bonus of +10, but your’e also at -10 for the quick glance. Circular, in that it’s artificially getting back to “make a Per roll,” but there’s utility there as well.

But what constitutes a normal good look? I’m going to assume that a standard look around for something is about five seconds long. This produces the chart on the right, with a 5s look-see hitting Vision+10 (the “in plain sight” bonus) and spending up to about 2 minutes will give a +5, while the -1 per 10% provides a smooth ride down to a flat Vision (perception) roll.

OK, great. that takes care of typical searches. Taking 2 minutes for a normal person to look at his front 180 degrees will pick up a man-sized object at 100yds 95% of the time.

This was going to be a much larger post – and still might be – that tried to wrap in Stealth, Camouflage, Shadowing, and general terrain features.

But that sounds an awful lot like something I can submit to Pyramid, and frankly, it’s a lot of work. There are a lot of “just roll a Quick Contest of . . . ” that lead to issues of sneaking up right next to people, or never being able to, and punishing default use of Stealth (DX-5) more than just not being sneaky.

It’s worth doing, though, since sneakin’ up on people, and being detected by sight, smell, and hearing, is a classic fantasy trope. So is the difference between seeing something, and knowing what it is. Batman, for example, is often spotted by virtue of dark motion against a dark background. He’s technically failed a Stealth roll (often deliberately) but made a Camouflage and Intimidation roll.

So yeah . . . there’s more here than I want to cover without a lot of thought.

5 thoughts on “A Quick Glance”