This coming Monday, I’ll play in my first game with the new D&D rules, and I’m pretty excited about it. Now that I’ve gone through a character generation cycle, I find myself very impressed with the integrated Roll20 support for D&D. Lots of macros, auto-calculations, etc. Good stuff.

I’ll get to the numbers in a moment, but I really enjoyed how the roleplaying elements of the new edition interacted with the die rolls for statistics. When I happened to roll a very nice set of stats, the ideals, flaws, and other motivational aspects pushed me to choose the Noble. That is a solid step up over the “you’re on your own” support for roleplaying in, say, Swords and Wizardry. That which is measured or supported with mechanics is more likely to be acted on, and the six background elements (more later) there are a nice touch. 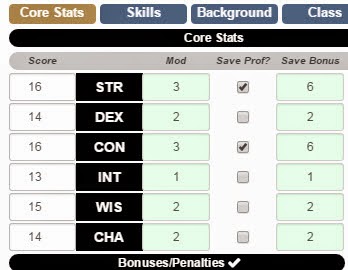 I started with +Ken H telling me that the die-rolling method was 4d6 drop the lowest, allocate as I’d like. I tend to start with fighters, and human fighters specifically, in games in the fantasy genre with which I’m not familiar. Also, he gave me the cast of characters, and I noted that there was only one fighter-type, and a Barbarian at that:

So I figured a straight-up fighter-type would be appropriate. I’m starting at 5th level, the lowest in the party along with said (gnome!) Barbarain.
In any case: the dice were kind. Raw rolls of 12, 15, 13, 13, 15, and 14! Choosing human gave me +1 to each of these (!), and I allocated them with my highest scores in STR and CON, and my third in WIS, since Wisdom is closely linked to perception rolls, and I like being able to notice stuff. I’d had a suggestion that since I was likely going to wear plate armor, that I could/should ignore DEX, but the concept of ignoring DEX as a fighter seems backwards to me. I put my “lowest” score,  a 13, in INT instead, and put my 14s in DEX and CHA. With the +2 CHA bonus, I felt that it was an indication of polish and sophistication.
Leveling up and making choices

I started with 6500 experience points, at the start of 5th level. So I got +2 to one of my stats, or +1 to each . . . or a Feat. Some of those seem cool, and I was tempted, but I figured I’d leverage the opportunity to start with a really obnoxiously high STR instead. That also kept new rules to a minimum, and since I don’t yet have the Players Handbook, it meant I could do it all from the Basic Rules.
Mixing a few things together, I wound up choosing the Archery fighting style, and the Champion archetype (the only one in Basic, but it fit anyway). I chose a Noble background, combined with my skill choices has given me Athletics (grappling!) at +7, History at 14, Perception at 15, and Persuasion at 15 as well.
In terms of other choices, Ken and I decided that Nosphryc (I looked around my room, and saw Cryptonomicon by Neal Stephenson. I took Crypto and Stephanson, came up with Cryptoson, and said, hmmm, maybe backwards. Nosotpyrc. Eh – Nospyrc? Nosphryc. There we go.) would have “a Wizard did it” as the basic reason he showed up miles underground in full armor and gear.
But then I came up with the idea that it was voluntary. That part of the family tradition was that potential rulers have to go adventuring in order to both increase the wealth of the family and prove that they’re heroic and noble enough to rule. That inspired the choices for the roleplaying elements, and that led to the choices below.

A Full and Proper Kit

Ken allowed me to, since I was 5th level, start with plate armor. I decided that all of his weapon choices would be large and two-handed – no shields for him, though he could use them if he chose. So with the martial weapon proficiency, he picked up a Longbow, a glaive, a pair of handaxes, and a longsword.
Ken also gave me a bunch of magic stuff: a +1 Sword, +3 vs. Undead (the Sword of Lendorth), an amulet that gives me +1 AC vs the undead (Amulet of Ren), Quickboots (40′ move regardless of encumbrance), a Medium Bag of Holding (to put all the loot in I need to bring back to my family), and a small handful of healing potions. When I’m not tramping around in my armor, I have fine clothes, a signet ring and scroll of pedigree, an explorer’s pack (which I’ll populate with the proper stuff before Monday), and his tokens of vice: a set of playing cards and a white, sequined lady’s glove that is not of good quality. At all.
Parting Shot

I’m gong to enjoy playing him, I think. He’s got decent mobility and AC 18, which I’m told is pretty decent. Against non-undead, he’ll roll 1d20+8 to hit with his sword, 1d20+7 but at longer reach to hit with his glaive. So in melee combat, he’ll range between 5 to 14 points of damage per hit, and 8-17 vs undead. Ranged weapons are the bow, which will reach out quite far, at 1d20+5 to hit, 3-10 damage, and the handaxes, closer-in but 1d20+7 and 5-10 points, for a smaller minimum. It’s slashing, though, rather than piercing, which is probably good against creatures that don’t have much structure to them. Skeletons and the like.
His STR and proficiency make him an excellent grappler , and he’s got good Perception to detect threats. I suspect he won’t be sneakin’ up on anyone, since his heavy armor disadvantages him on Stealth, but what with two rogues in the party, I think he’s more likely to be on the lookout to provide fire support when the rogues are out on point getting themselves in trouble.
I usually don’t play front-line types. I like me my rangers. But I wanted to stay basic for the start, and the Archery fighting style gives me a decent stand-off. I’ll definitely be looking for magical bows and arrows, though. If I could mitigate the clanky-clanky of the plate, he’d be a good point man – put a wall of metal and muscle up front.