Christmas came a bit late to Gaming Ballistic, but I found myself with a gift certificate to Cabelas. Since my wife and daughter both have bows, I decided I wanted one as well.

I debated on compound bow vs. recurve, but I’ve always been a sucker for the simplicity of the recurve. It’s not a traditional longbow, which would have been awesome, but nonetheless it’s what I found myself with.

I asked for what they had in the 50# range (I wanted a strong-ish bow, and 50# is olympic standard), and stepped up to the firing line to trial the bow. First shot felt nice. I was told to “aim at the fish,” which as a 1″ wide, 3″ long yellow foam thing stuck to the target.

I picked out a dozen feathered arrows that are probably a bit strong for the bow. The first sales guy I was trying to talk to was a bit of an asshat, so I wound up with the wrong arrows (55/70 instead of 45/60). 29″ shaft (we measured at full draw) and a dozen 100gr field tips that somehow never made it into my bag.

The results of the shooting were pleasing enough that I just bought the thing. I’ll pick up some more points, and my family will try and find an archery club here in Minneapolis to start practicing more regularly. Shaeffer Archery nearby has an indoor range, so perhaps that’s the ticket.


The bow itself can be worked out using The Deadly Spring. There are a lot of inputs, but cutting to the chase, the riser (non-working section of the bow) is 1/3 the total, while the limbs are 2/3 – this is obvious when it’s taken down, because each section is basically the same length. 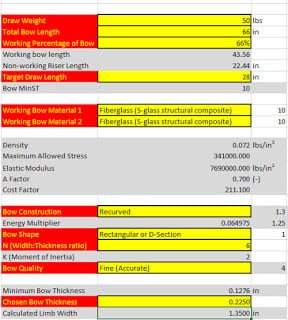 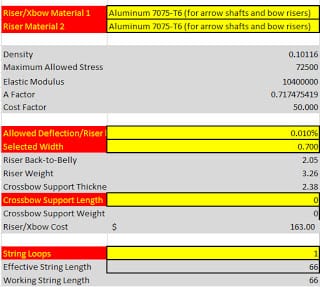 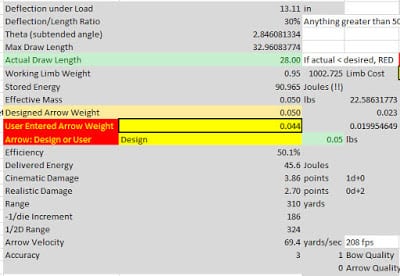 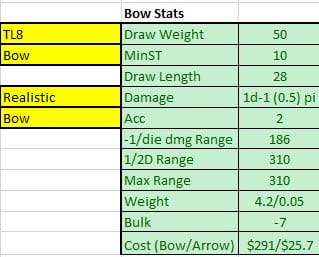 The inputs include fiddling with the limb thickness and a bunch of other stuff. Net/net, the model predicts a velocity of the shaft on the order of 200-210fps, Acc 2 (not great – maybe not enough), and a $300 price, which is probably a bit less then 2x higher than I paid for it. That’s OK, though – it’s designed with GURPS prices in mind.

If I give it the “Cheap” modifier, the price is nearly exactly correct, but that would make it Acc 1, and I’m fairly sure that’s not accurate enough. I mean, it’s not an Acc 4 olympic recurve for actual Olympians, but perhaps it needs the “cheap is good, good is fine, and fine is very fine”  type adjustment that knives get.

Penetration is poor with field tips – as it should be. it’ll clock in at about 1.25 – 1.35 points of penetration including the armor multiplier of (0.5) for the field tips. If we slapped on a forged, barbed, heavy war point (about 500gr for the point, 250gr for the shaft) then damage would increase by a tiny bit, but not enough to eke out more than 1d-1 (1) imp or even 1d-1 (2) imp. More likely than the 2 is that it would increase penetration by about one point, which would make it about 1d imp. That heavy arrow would take the max range down to about 195 yds, and it will do full damage to the full range of the arrow’s fall.

How good was that shot?

I can’t wait to take it out for enough target practice to calculate a bow skill. But first, we look at the bonuses that I get for having all the time in the world and no orcs piling out of the clothing aisle trying to kill me. The light was good, the range was known, etc.  That’s good for probably a +9 bonus (!). The size of the target is probably 1″ x 3″ about 3x the size of an eye, which makes it about -7 for size, and about -4 for range (11 yds is technically -5, but it’s . Accuracy is probably about +4  for the bow, 2 more for a long aim). That’s about +1 or +2 to skill net. If I’ve got a single point in bow skill, Bow-9 would be adjusted to Bow-10 or Bow-11, which would actually give me about a 50-62% chance to pull off this trick. Also, All-Out Attack (Determined) helps. If I’m shooting from Default, it’s probably Bow-6 or Bow-7 (with Dabbler), which again would wind up Bow-9 or Bow-10, for about a 1 in 3 or 1 in 2 chance of putting an arrow on target – that seems not-wrong to me. I need a huge amount of bonuses to pull that off, but I have them, so I’m probably Bow-6 to Bow-9 as an estimate. Not spectacular, of course – but then, that is a testament to the quality of the rules. If I needed to self-identify as Bow-14 to pull this off, that’d be a problem.