Just for fun, I used the Damage = 4 * Log5(Kinetic Energy) conversion on a longer list of cartridges than I provided here.

I like using multiple dice because they both roll if you crit, which gives a lot of room for very serious wounds.

That’s the other thing that could potentially be done here, as well, using the principles from expanding the crit range for different armor types. Larger and more damaging projectiles could (should?) have a wider range where a hit is also a crit. I based this entirely off of the mass of the bullet, using a logarithmic scale. My first attempt gave 5/4 * log (Mass) for the width of the range (a .22LR was 2), which gave 19-20 for the anemic .22, and 17-20 for the mighty .50BMG. A 25% chance of a critical hit is pretty great, so I stopped there, though obviously it could be tweaked even more. 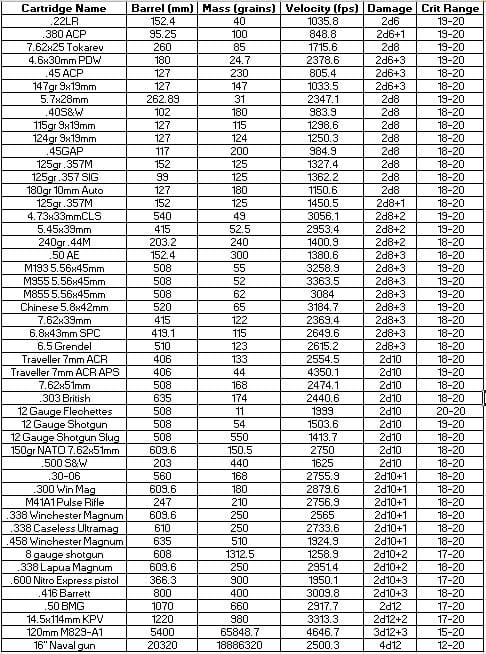 One late-breaking idea on the critical range: some of these cartridges/loads should potentially be able to rock the world of nearly anyone. I’ll suggest that for weapons with an inherently expanded crit range like above, that one divides it into segments, with each segment doing more damage.
So instead of a crit is roll the dice twice (2d8 becomes 4d8), you might say that if the crit range is 17-20 or better (so 12-20 to 17-20), then half the range gives double damage, while the other half gives triple or even quadruple.
So a .50BMG does 2d12 on a hit, 4d12 on a 17-18, and 8d12 on a 19-20. (Alternately, reserve quadruple damage for a natural 20). That would make the maximum damage from a 16″ Naval Gun 16d12, max damage 192 points, which can and should threaten just about anyone.