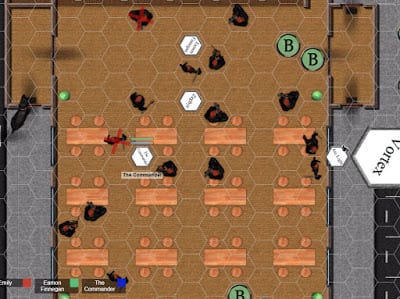 The game picked up more or less in the middle of things. We’d established that the horde of mooks could not really hurt us, and also that Yukio the Wonder Dog (an important Ally of mine) really should have been biting folks by now. Oops.

We had discussed the fact that we simply must get Vortex inside, out of the rain, in order to do anything to him, but did not actually come up with any good plans to do so by the time the game broke up last time.

He’s big and getting bigger . . . and we need to stop that so we can stop him.

Zephyr steps up to the plate, and since his player is absent, we put him on “mop up the mooks” duty. He has the speed to Rapid Strike four times, and he does so, taking out one mook in front of him.

The Commander uses a cinematic KO strike to knock out one of the mooks in front of him; one of the rules is that you can’t kill a foe doing this, even if you do full damage – so I roll all 5d+14 crushing damage and drop him, though it takes two attacks to do it (the first is dodged, the second strikes home).

The Rat Queen moved up between Vortex and the Innocent Bystanders, doing an All Out Defense: Dual to try and protect them.

Arc Light hits Vortex with a lethal arc blast, at -2 to defend, rolls 40 damage – painfully boiling off some water. But not that painfully. Vortex angry! Vortex angry!

He goes after Arc Light, who can dodge out of the way. The bulding is not so lucky, and does 66 HP of damage to the poor taco stand. In a few more rounds, it’s going to be toast.

One mook tries to shoot The Commander in the back, but he dodges; another crits with an all-out attack with a chain saw to the groin, which makes me drop my sword, but does no damage through my armor suit.

Emcee: Whatever you do, don’t hit him in the balls.Stu: You said “anything goes”!Emcee: Anything goes, but he’ll take it personal.

Another one tries to chainsaw The Commander to the back, and a failed dodge means it too glances off the armor, this time with no effect. A few mooks try and thump Zephyr with sticks to no real benefit to themselves.

And out of nowhere, Yukio the Dog of NIMH runs into the building and tears out the throat of the guy who just tried to chainsaw his friend the Commander. One does not mess with the friends of the Dog of NIMH.

Zephyr tries to go upside the head of a mook, who critically succeeds in a dodge roll. Mooks went all Matrix on him.

The Commander’s pissed. He does a flourish and kicks his bare blade up to his hand, and then front-kicks the mook in front of him (who just chain-sawed him in the nuts) and crushes his chest, knocking him back and out of the fight. The rest of the mooks see this (plus what Yukio just did) and decide that discretion is the better part of valor.

The Rat Queen tries to nibble Vortex to death with an area effect rat attack (no, really). It’s a swarm attack, for best possible damage 9 cutting damage. Vortex does NOT like this. And he also doesn’t like but less so, 39 more points of lethal electrical damage.

Vortex goes after The Rat Queen with two whompin’ blows – hand-to-hand and he’s big and heavy. Ratatouille backs up and dodges twice, thankfully. She makes it look good – Rat Ogre bouncing around like a rat being dragged away from an open refrigerator.

Eamon goes for the gravity slam, bringing a heavy gravity blast down on  . . . well, who knows. He crit fails the roll, and has to check to see if he cripples the power itself. He barely makes his HT roll.

More mooks try and pound on Zephyr with sticks. It’s pathetic and harmless. He ignores them, but pops Altered Time Rate and does a run-around attack – which he realizes he can do every turn if he wants to – he hits him a lot, and KO’s him with at least two hits.

Yukio goes after any mooks who remain a threat; Commander takes his bad self out to face Vortex, moving at almost his full move, but not quite – 11 yards. Realizes that this means he should have a 2-yard step.

The Rat Queen continues to take nasty bites out of Vortex, who retaliates by attacking (and missing or being dodged by) Arc Light.

Arc Light, in turn, cuts loose with an area effect blast that does 37 points of damage – he’s visibly smaller after that. But he’s got enough wherewithal to hit the Rat Queen with a ST 40 constricting Binding (her current Base ST is 41).

Eamon hits Vortex with a gravity slam, another area effect attack, for 23 crushing. That’s basically terrible for him, and more  inhuman screams emanate from Vortex as he takes more injury of a type he’s not resistant to.

Zephyr runs at ATR to the back of Vortex, and hits him with the Hundred Fists of Death – an RoF 100, Rcl 1 lightning punch thing – from behind. So he hits something like a zillion times – only one point of damage per hit, but there’s a lot of hits being thrown down.

Yukio continues to savage the gang members in his inimitable way, combining all the savagery and training you might expect. The Commander power stunts a 5d6 kinetic blast, double-knockback for 40 points of knockback.

The Rat Queen’s minions continue to gnaw at Vortex, and she boosts her ST to 63 (!) and breaks out of the binding easily.

Arc Light continues to light up Vortex, and another 42 points of potential damage (less whatever tolerance he has) head downrange. He’s getting collectively smaller as the minutes go buy. He drops to the ground, shrinking to normal size, but surrounded by rats trying (successfully) to drink him to death, as Vortex tries to reform.

We didn’t hear the helicopters, but suddenly we’re surrounded by guys with a ram’s head logo on their gear. Their armor is very sci-fi looking, and they shout “Hold up your hands! Hold up your hands!” About three squads slide down fast-ropes and hit the ground, surrounding us. We hear “Sir, Basilisk is in place.”

We mostly don’t put our hands all the way up, but we know “outnumbered and outgunned” when we see it, so we pause. That being said. Arc Light casually decrypts their high-tech, state-of-the-art encryption with the help of his battlesuit AI, so we settle in to listen, learn, and probably be insulted a lot.

We’re approached by a hawkish-looking hispanic man with iron-grey hair. He looks supremely confident until he sees Yukio, when his expression changes to that of one trying to figure out what doesn’t belong.

The Commander converts his armor to the more standard military-looking body armor, and we all get the general feel of surprise to see the Commander. Surprise, righteous indignation, anger, and then hatred or distaste. Arc Light perceives outright disgust – this guy does not like metahumans; he considers himself superior to all of us. His name tag says “Cortez,” and he proposed my Miami mission and was on the JCS opposing my early promotion to Commander.

“You are either dead, or AWOL,” he growls.

The Commander doesn’t say anything. Yet.

“Sir, you’re going to have to step out of the power armor. We’re with Project ARES, and the city is under martial law.”

A female voice over the radio says “Sir, do you want me to take the shot or not?” Someone new: “Not. Yet.” The female voice says “I never get to have any fun.”

The Commander notes, with utmost politeness, that the SEAL base in San Diego is my home station, and since the Martial Law was declared in New York, I was obliged to stop and render all possible assistance. As long as I’m on my way to report in, I’m within my rights.

Eamon gets the feel that Cortez is lying about the martial law thing, and challenges him on whether martial law has actually been declared.

He grudgingly acknowledges that it has not, in fact, been declared. Their orders are to render all required assistance. Nonetheless, Cortez is well within his rights to order the Commander around should he choose.

Eamon notes that he’ll have to testify to Congress about what went on here, and if he’s ordering a key asset to cease rendering aid, that won’t look good.

Cortez is so mad he’s actually steaming. Seriously. He walks over to The Commander, brushes his epaulets. Starts to walk away with the prisoner.

Some high tech transport rolls in, and a stunningly beautiful woman decloaks, and she’s at least 6’6″ and carrying a gigantic rifle. The gigantic woman – who’s fatigues say “Legend” where the nametag does – touches Zephyr, who’s wounded. We all watch as the bullets pop out of his flesh. It hurts a ton, but his wounds close in front of our eyes.

Legend disappears as she walks away. We all head back to MAPS HQ, intending on holding Vortex there until we can secure him back at Rikers, when they’re ready.

The damage assessed on the Taco place is less than $1000 or so, broken and cracked windows, but little else.

We bring Vortex back to Rikers after a brief stop at MAPS precinct. The prison warden asks The Commander if he might help – guards and troops have been heading down into “the pits,” the nastiest part of the prison . . . and not coming back.