+Christian Gelacio had a good comment on my post on Naval Cannon. Good enough that I didn’t want to relegate the discussion to that post. So here’s my response in full. His comments are going to be in bold/purple. Mine will be in regular text and indented.

I do not believe it would be appropriate for smooth bore cannon to have a crit range. Because of the lack of stabilization of the cannon ball a single cannon rarely hits “the broad side of a barn.” Cannon are usually used en mass to guarantee hits. Targets are usually Fortifications, ships of the line, whole armies, etc.

I think you might be overestimating the inaccuracy of muskets and smoothbores, but even if I stipulate that you’re correct, the higher crit range represents (to me) the chance of the giant freakin’ cannonball hitting something important. That is, the higher crit range IS the higher damage you mention in your second point. More on that in a bit.

What I’d do for inherently inaccurate weaponry is a to-hit penalty. That way, you wind up with a lower chance to hit at all, but still the possibility of a more-damaging critical.

Personally, I think damage should be higher. Are you using a modified Taylor Knock Out Factor “TKO Factor” to determine stopping power, then converting to DnD damage.

No, the Taylor KO factor is equal to the bullet’s momentum multiplied by its cross section. That figure of merit actually does form one of the quantities in my GURPS wounding model, but its always related back to a kinetic energy-based penetration factor.

If I use P for my KE factor in my GURPS model, and T for the Taylor equivalent, I measure actual injury as sqrt (P x T). Since the P factor gives penetration of armor (again, in GURPS), the wound channel (or “bullet size,” if you will) factor (WCF) winds up being WCF = sqrt (P x T) / P, or WCF = sqrt (T/P).

For the dirt-simple conversion I did for DnD, I even neglected P, nevermind T. I just said wounding is related to the Kinetic Energy of the projectile as points of damage = 4 x Log5 (KE).

As has been pointed out in the past, I could have easily just said Points = 5.7 x log10(KE) to make it doable on any calculator.

So . . . back to the topic at hand:  As noted in the post, it’s strictly based on kinetic energy – simplistic but good enough to say “more powerful projectiles do more nasty things.”

Momentum or a Taylor KO factor might have been interesting, but it didn’t figure in any of my work. 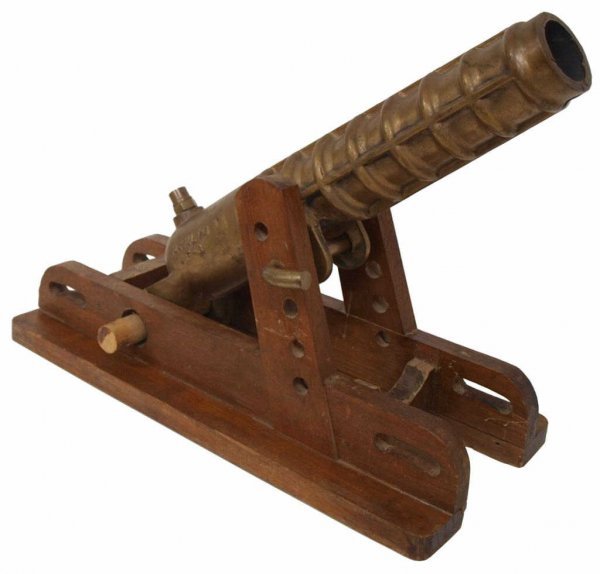 That actually works for me, with a .50BMG being about the equivalent of 6d6, which I think is your basic fireball (?). But it also would make the .22 LR (2d6) significantly more wounding than an arrow, which does’t work really well.

Seems to me that your damage formula is breaking when scaled up to cannons.

I’m not sure that’s true, though I’m not sure it isn’t, either. I’ve been told with this conversion about equally that damage has been high and low.
In one of the posts, I suggested breaking the “bigger critical” range into a double damage and a quadruple damage range, either halfsies or the 20 gets the 4x damage, and all else gets 2x. That was to address the direct hit question a bit better. But it keeps being pointed out to me that most “hits” are not true hits.

They’re scary, they make you duck behind cover, or use up some quantity of luck, skill, and fortune. It’s only the one that sends you into negative HP that actually strikes home. I’m mostly a GURPS player, so that interpreation isn’t native to me.

With the dual critical range, it means that some hits require even more luck, skill, or fortune to avoid being incapacitated at 0 HP. This gets to your point below . . .

Disclaimer: I am only familiar with DnD 3.5. I do not know how damage is treated in 5.0. Crit ranges in DnD 3.5 was to differentiate how easy/hard it was to deal extra damage. Scimitar, Kukri, Rapier, Falchion, etc. have higher crit ranges because they are lighter and more balanced than similar weapons. You might be better off increasing the base damage and/or crit multiplier. I’m actually using the crit ranges for the exact same purpose – to represent the severity of a wound that does strike home. A 5.56 or 7.62mm round that hits the vitals is going to kill any arbitrary level human – but again, that’s a GURPS-centric concept, where a hit is a hit, period. 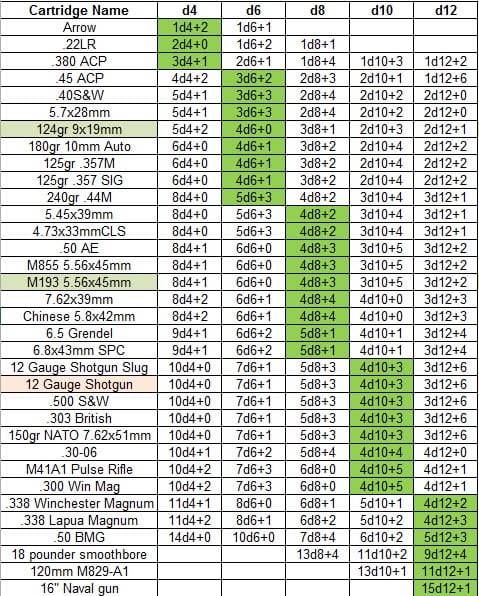 I think, personally, that’s too high for DnD, and also the reason I used the expanded crit range to boost damage with a better-quality hit. But everyone gets to have their own flavor of game, and can and should adjust expectations accordingly.

I’m wary of damages in DnD that allow or encourage one-shot kills, though. The game mechanics encourage battles of attrition, and even John the Mighty with STR 20, a +3 two-handed sword tops out at 1d12+8 per blow. (13.5 pts average, which on the above scale is about equal to a 9mm pistol).

I could use a two-range scale, with one scale up to (say) 20kJ of damage (.50BMG level, bit higher), and then a higher scale for anti-vehicle cannon, but I prefer smoothly-scaling functions.

One thought on “Naval Cannons in DnD – Responding to a comment”