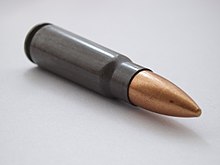 The 7.62x39mm cartridge cleared all of the major hurdles to design and mass production in 1947, and remains one of the most popular chamberings for combat rifles in the world, almost certainly due to its proliferation by the Soviet Union. It’s archetypical platform, the AK-47 assault rifle, is one of the only weapons to appear on a national flag. It’s that iconic.

The cartridge itself propels a 123gr (just shy of 8gr) bullet that is actually 7.92mm in diameter, with a steel core and copper-washed steel jacket. Martin Fackler, my favorite ballistician, has good things to say about the design relative to prior projectiles, but notes it’s quite stable in flesh, and the sturdy construction of the bullet makes it unlikely to either tumble quickly or fragment badly, limiting its wounding potential. That’s not to say it hasn’t killed plenty of folks worldwide.

Basic inputs for the calculator are as follows, selecting 415mm for the (test) barrel length. The Pact-standard M43 steel-core FMJ round was selected as the basic package. 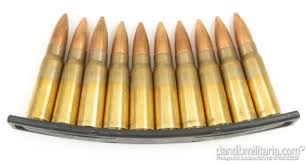 This is the classic “adversary” round for modern action and any sort of cold war game. It found use in both the Soviet Union and China, and is still rather popular in Africa and the Middle East. And the USA. And . . . you get the point.

In any case: the original M43 bullet is optimized out of a 415mm (about 16.3″) barrel, and the longest barrel I could find was a 26″ bolt-action gun. This is not a long-barrel cartridge, by any stretch of the imagination. If you want that and want a Soviet/Russian round, use the 7.62x54mmR.

But that being said, sometimes you make do with what you have. And the RPD light machinegun does shoot from a 520mm barrel, so there you go.

Notes
The typical barrel lengths for this rifle are in the 8-10″ range for very short rifles, the standard 415mm barrel, and the 520mm barrel of the light machinegun. Given the number of rifles and variants, anything from a low of about 7.5″ to the 26″ barrel mentioned earlier probably exist.

There don’t seem to be the huge variety of loads that are featured on (say) the 7.62x51mm NATO rounds. That said, there are two important variants that exist.

After 1989, a heat-treatment process was introduced, along with a higher carbon tool steel, that improved the penetration of the standard bullet by 2-3x (!). This would usually qualify as an AP variant. However, since the AK47 isn’t notable for being a high-threat projectile for modern body armor, that might argue that pre-1989 bullets earn themselves a (0.5) armor divisor, and modern construction would simply be (1). So the old variant might do 5d+2 (0.5) pi, while the modern is 5d+2 pi.

There are also soft-point and hollow point versions, which would come in at 4d+1 pi+ using my usual conversion.

There’s really just the one.

OK, that’s a ridiculous lie. But if you stopped and started with the AK-47, you wouldn’t go far wrong. These can be stamped out by the kajillions, or purchased nearly custom to get the nearly oxymoronic high-end AK.

Other variants include the AKM (modernized AK47) and shortened versions such as the AKMS for paratrooper use. The AKM is, I’m told, the most common mass-produced variant of this weapon, with the a cheaper stamped, rather than milled, receiver.

The SKS is a more traditional-looking clip-fed rifle.

Some pretty interesting variants exist, including this bullpup version. 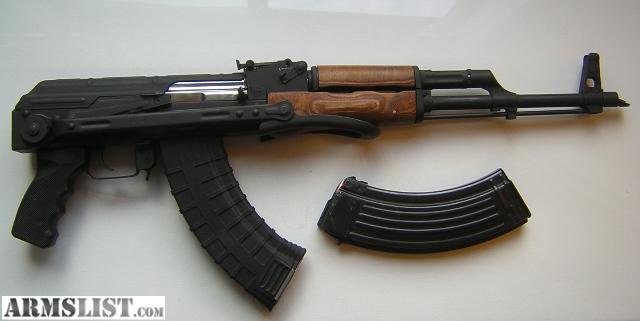