We start off in media res, having flown to Egypt to track down the trail of dead bodies left by the last crystal skull. The Commander is asleep (because nothing exciting was happening), when suddenly a gang of thugs with three motorcycles and one jeep pull up behind us and move in to attack. One of them shoots the Commander in the shoulder – just a flesh wound – before he wakes up. This causes him to roll over before he starts snoring again.

Zeke fires four tangler arrows and three of the three motorcycles go down hard. The jeep is hurtling towards us. The Commander does not wake up. Eamon does a TK attack at the engine to try and make the thing throw a rod or burst a cylinder or something else vaguely non-powered. And the jeep goes down.

From the side of the street, two more jeeps come out of nowhere. They’re now pointing RPGs and a .50 cal at us. Yukio pulls his head out of the open window and wakes me up with a giant-dog sized wet lick to the face.

Zephyr makes a Stunt roll to screech around the corner; nonetheless, several RPGs streak at us. Between gravity control and force shields, we barely contain or deflect the RPGs. We still have a .50 cal shooting at us, though, so Zeke tries to put an exploding arrow down the barrel.

He melts the barrel and the car. So works. Zephyr does a cool driving stunt and increases the range band. We pull into an alley and disappear.

Nonetheless, as we wend our way to the dig site that was the location of the murders, we realize quickly that someone paid off the thugs to intercept us in particular.

The gangs are getting pretty thick on the ground; we’re not just going to be able to just go there. So Eamon calls a guy who calls a guy, and Ashraf is the man on the scene. He gets us transport, firearms, rocket launchers, and maybe drugs. Eamon says he needs a firearm, and winds up with a pair of Desert Eagles in pink with hello kitty imprinted on them. Zephyr pays 25% in cash and gets one, because even though he doesn’t use guns, everyone needs to have a Desert Eagle with Hello Kitty on it.

We arrange with Ashraf to get less conspicuous transport, and in order to help that out, Zeke “speaks” to Ashraf’s car and fixes up better than new.

We nip on out to the site, and it’s big. Three 2.5-ton trucks, skeletons inside. Some were clearly trying to escape. And a desert wind suddenly starts to kick up. And we discover that the entire site is set up on a ley line for a ritual purpose. 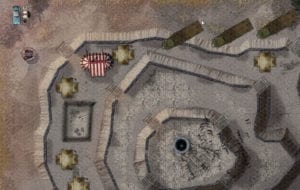 Oh, we are so, so very cursed. The wind conveniently blocks visibility so the mummies can come kill us all.

We head into the big colored tent, which is filled with corpses and a lot of computers for us to rifle through. At Zephyr’s request, we police the bodies out of the tent.

And Zephyr, who just can’t help himself, ever, decides to read all the journals and books. (“YOU MUST NOT READ FROM THE BOOK!” -The Mummy)

The data and the books show that a well known philanthropist and zillionaire is bankrolling the dig – Nicolades Xanatos or something.

And an archeological journal from Marian something gives us more supernatural hints. And the wind picks up even more.

I ask the skull if it can sense its brother nearby; it burns my hand by way of telling me to STFU.

We go outside, and there’s a barefoot man staring at the dark well in the center of the dig site. He’s got long shaggy hair, shaggy beard, tattered clothing.

He walks up to The Commander and starts smelling me. “You smell like family.” The Commander makes his Stealth roll by 20, pulling a Disappear.

The rest of the team offers him some gatorade; that gravelly voice feels like dehydration. When Eamon uses his ability to scan him, he turns around and stares at him.

This guy is also a beacon of pure kyberian energy. We wonder if his skull is actually a crystal skull. He doesn’t remember where he was; he says he escaped from “them.” He’s here because something called to him.

We find a broken cartouche, so naturally Zeke fixes it (he can fix anything tooled) and all of a sudden a blue-tinged spirit goes screaming into the air.

(I’m a bit fuzzy tonight – having a hard time transcribing)

We establish that his name, or nickname, is “zero,” and knew the nazi that General Legend and his sister.

We wind up jumping into the well eventually, and suddenly realize we’re in a Dungeon Crawl. This is going to be so good.

I was really off my game last night. Not focused, having issues following the plot threads, and a bit loopy. I had gone running earlier, and the weekend – a long weekend – was stressful for various reasons. Anyway, the game was much more interesting than the transcription makes it out to be, though we did a lot of standing around waiting for stuff to happen. That, again, was my fault. As team leader, my job is to keep things moving, and I was MIA.

We’ll get ’em next time.

One thought on “Aeon Campaign S4E8: Where’s my mummy”