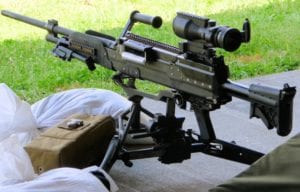 Last night in the Ceteri game, my character had the opportunity to unload an RoF 15 weapon in a narrow cone with something like five or six targets in it. It was a good chance to use the rules for suppression fire, which basically give you a 6+RoF bonus chance to hit there.

We use some generally agreed-upon rules – a combination of “this is the way we think the rules are actually meant to be applied,” common sense, and a slight tweak on the RoF bonus table.

It’s not much. Look up the number of bullets fired on the Size and Speed/Range table, and read out the size modifier. Divide it by two, but round UP. Yes, up. That’s not the usual, but it works.

It’s got a lot in common with the normal rules. Past a certain point, you need to double the shots fired to get the extra +1. One or two shots gets nothing, but the “three-round burst” actually gets a bonus, which is nice.\

If you want to bother with it, if you fire a cone, simply take the total bullets fired, divide by the width of the cone at the point where your target is, and your RoF bonus is based on that. So if I’m unloading 15 bullets into a cone three hexes wide where I’m shooting, it’s 5 per hex, ergo only +1 RoF bonus there, or “Roll 7 or less to hit.”

The basic application here is that if the target is in the cone when it’s laid down, it gets attacked. If it’s a multi-hex creature, it gets attacked for each hex in the zone. That’s not news.

The way we apply the rule – how Christopher, I, and Merlin all have come to both interpret the actual rule and the sense of it – is that that cone is persistent. A target that is not in the cone when it’s initially laid down will be attacked for every hex that moves into a hex in the suppressed zone.

The zone is two yards wide? If you didn’t start in the zone and you cross it, you’ll be attacked twice. You started in the zone (and therefore were attacked when it was laid down), move into the left side of the zone, then out? You get attacked once for the move into the left zone, but not for moving out of it (ergo that stepping dodge, dodge and drop, take cover, etc).

If you move up the zone, advancing on the firing person, for five yards? You will be attacked five more times.

Quite simply, if you are within the zone or a yard of it, and you are capable of feeling fear, you will have to make a fright check. Fail and you must leave the zone by the most direct path, take cover, or be stunned. This simulates the panic under fire that can happen. I’d probably leave the “freeze as bullets rain down” for failures by 5+, but basically, that zip-zip-crack of the bullets whizzing by is great incentive to get the hell out of there.

One of the forumites and a fairly frequent interlocutor and former infantryman notes that some definitions of “suppression” are basically “0-9% casualties.” That is, you’re really not hitting on better than a 6 or less anyway. So the fright check is important for creating the necessary behavior on the part of not-superhumans exposed to gunfire.

The tactic was effective last night. I laid down a corridor through a cone of bad guys that killed or injured two and made three or four more at least rethink their life choices. I don’t recall having to do it twice, but if I had, I’d have run out of bullets the second time (30-round magazine).

It had precisely the desired effect – at least one disrupted (basically right next to me) and the rest either hit or ducking. The presence of the persistent cone of fire, drawn on the VTT screen, was a visible reminder of area denial . . . and yet one of our allies crossed it to get to his son, with no harm done. Lucky, but he made it.

It’s a quick application and interpretation of the existing rules, but it just feels right in play, and since the emergent behavior is all one could ask for, we use it.