Sorry for the hiatus in the issue review. I was on vacation, and more or less out of contact with computers and stuff. I did get in a major edit of a Pyramid article I’m writing, which was good, but by and large I was unplugged save for my cell phone. And my TF300 tablet. And a laptop. But relatively speaking, I was away from my computer.

Yeah, I’m not buying it either.

Anyway, this brings to a conclusion the full-issue review of Pyramid #3/57: Gunplay. As I said when I started, this issue, from front to back, is on-topic for this blog. Plus, of course, I kinda had an article in it, which means everyone should go buy it. Maybe twice.


Steven’s weekly endnote to each issue is tied to the theme being presented. He’s not a crunch guy, at least in the RTT, and so he’s often discussing the in-and-out of plot development and story pacing. This RTT is no exception. He talks about the methods for keeping the focus on the guns, and the plot, and the plots about guns.

This section takes some time to discuss how to play fast and loose with something that is usually subject to strict resource management constraints. It also turns this on its head, with a question for those of us with little time or patience for bean-counting: If you’ve already decided that you’re not going to track shots, how do you introduce and make fun a section of an adventure where ammo management is the key plot point?


But it’s a good pun. Well, sorta: When a Wound Makes a Guy Lycanthrope Up and Die, That’s Ammo-y. You be the judge.

You’ll see what I did there in a minute.

A very short shout-out to when it’s not the gun, or the amount of ammo or total quantity of dakka in question, but the kind. When your target is a werewolf, or something that Just Won’t Die unless you shoot it with a rocket launcher or something, then the plot revolves not around lots of bullets, but just a few of a special type, at the right moment.  And what’s more, if you don’t use them, perhaps you can keep them around as loot or a life insurance policy. One of the hardest things for some players to do is to use up expendable but non-replaceable items. So make them have to do it, make them want to, but make them also realize that yes, they’re using a precious resource that they might need later on.

Our Greatest Fear . . . A Dusty Corridor

Weapons require cleaning (though some weapons less and some more than others), and focusing on the need for maintenance, and what can happen when it’s not done, is a plot point that has little to do with the usual Acc, Dmg, 1/2D Range, Bulk type of statistic. Ensuring that they go boom when they are so commanded, and realizing that having to take the time and effort to service the firearms carried, is an important part of real-world gun care and feeding, and ensuring that spare moments are actually occupied with this makes sense. Especially if the PC is supposed to be a Tier One operator or something. 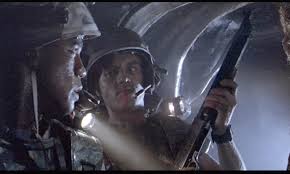 I’m shocked, shocked that the quote used wasn’t “Hey, Ryan, be careful what you shoot at. Most things in here don’t react too well to bullets.” – Captain Ramius (Sean Connery), The Hunt for Red October. Perhaps it was too trite. But the helium example? Helium doesn’t combust with anything. Perhaps the goal was irony.

But one way to enact serious gun control is to make it so that every shot that doesn’t go to plan is a serious risk. They did it in Red October, and they did it as well in Aliens, where the standard bullets in the pulse rifles were 10mm explosive-tipped caseless rounds. Under a giant power plant where apparently even a small containment breach would trigger a 40 megaton explosion. In a fusion reactor. Maybe it was the audience’s Willing Suspension of Disbelief that exploded? But I digress.

Plenty of Shots, Not Much Time

Finally, in a quick text box that is probably barely longer than some of the notes in this mini-review, Steven notes that one way to keep the tension and ignore number of bullets is to focus on having a very, very limited time frame to accomplish a goal. He (correctly) points out that one or two seconds of GURPS combat, enough for everyone to have gone once in the usual “GURPS turns are interleaved and hard to figure out until everything’s over” way, can take a long time to resolve, and thus create much more tension than might be expected.


While not rules-centric, the overall points are well made. Roleplaying game characters do not very often have that hesitation to start gunfights, seemingly are immune to legal structures, and frequently can – or are even expected to – resolve nearly any situation with violence. Bringing a sense of tension back to this can required emphasizing different aspects of the firearm, not just “how much damage does it do, if you can hit” but also “can you get through the fight with limited resources intact” or even “can you get through the next ten fights with enough resources intact.

The final page in the issue points out other places where you can find bullets that are exotic that are already published in GURPS books, including Horror, High-Tech (the original and both Pulp Guns volumes), Monster Hunters, Loadouts: Monster Hunters, Low-Tech, and – oddly enough – Dungeon Fantasy 8: Treasure Tables.
Ballistic’s Report

This issue rocked on toast. Every single article was well written and/or filled with good stuff. It had the first part of what could easily have been a full e23 supplement on the Modern Warfighter. It had everything you could have ever wanted to know about one of the most famous attack helicopters ever. It had a gun company (for use as a patron or supplier) and a historical example of a gun that didn’t hit it’s target marketing-wise, and could break your shoulder and set your ship on fire to boot. It contained a lot of detailed optional rules for those whose willing suspension of disbelief does not extend to dodging bullets. For the supernatural set, it listed some things to blow out of the muzzle that aren’t jacketed lead or mild steel. To wrap it up, the editor points out that firearms are plot devices as much as they are instruments of destruction, and a wise GM will treat them as both.

I’m biased towards such, but this was a great issue, and the title “Gunplay” doesn’t really do justice to the breadth of material it covers. In fact, the only article that really dealt with actual gunplay is my own. The rest are equipment-based or plot-based, and more broadly useful than the issue’s moniker might think!