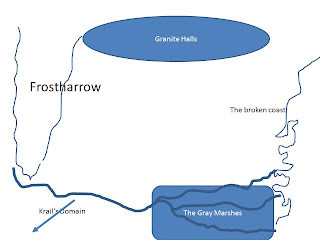 A few days ago I posted this sketch of the local area that will become the Krail’s Folly stomping grounds.

I think it’s a relatively compelling little map. But powerpoint just sucks as a graphics tool.

Fortunately, I have two other tools at my disposal. ProFantasy’s Campaign Cartographer 3, and Fractal Mapper 8.

Unfortunately, I suck at both of them, and need to crawl up the learning curve for both.

So, I will. But I’m also inviting anyone who likes maps to try their hand at it as well, as a fun challenge. I’ll post all responses, and ones that particular suit my ideas of the setting can expand on what they did, how they did it, and why in a guest-post. Woo hoo, exciting, eh?

Edit: Luka Rejec dropped by on Google+ and dropped off a link to his work. It’s spectacularly good. I was thinking to aspire only to “better than powerpoint,” which is a low bar. But if something that cool shows up, well . . . ain’t gonna complain now, is I? 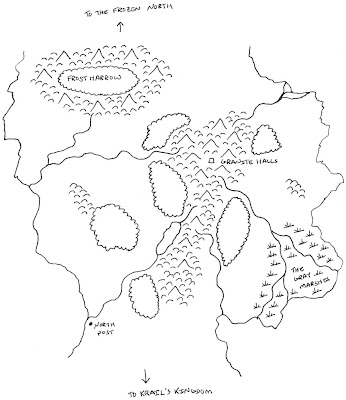 Here’s a submission by +Jeromy French, who annotates his map as follows:

My idea of a place called Frostharrow should be a more northern area where it can be legitimately cold. Thinking an area enclosed by mountains with a frozen forest sounded cool. I agreed and copied your marsh idea. When I immediately read the word Granite Halls I thought of an abandoned city carved out of stone. ﻿

This one has the key geographic features all in a line, instead of demarcating a box within which the adventurers will bounce around. It labels the Granite Halls as a key landmark, and he had the same thought I did about the Gray Marshes: big-ass river flowing through it. This probably means from a crop-growing standpoint that if the PCs at least start from the Marshes and north, they’ll have coastline, a breadbasket, and a constant threat from the mountains and hills in the west, assuming that the Granite Halls are still occupied.

That being said, having the Granite Halls be a place instead of a region is really interesting, and bears serious consideration!

Zuke Prime over on Google+ just sent in a new entry, and it’s a doozy. He used Campaign Cartographer 3 in black and white mode. It’s a very, very pretty map.

I’m brand new to CC3 and mapmaking in general, so this is my official “first attempt.” The key to CC3 is working in a logical, layered approach. You always start with the landmass/coastline, then add your significant terrain features, then rivers/lakes. After that you “populate” it with towns and features.The biggest difficulty for me is editing out mistakes and trying to get the right sheet effects to kick in. What I love about CC3 is it allows noobs like me to produce cools maps in minimal time.

However! I’d probably change it a bit in certain ways. I think there’s too much forbidding terrain and not enough inherently desirable about the area that adventurers would want to carve out land there. But maybe not. There are a few places on the map that would make great landholdings, and the scale of the place – that bar is 100 miles – means you can get 10,000 square miles of freehold in three different places that aren’t swamp or mountains. So perhaps this is just fine. As always, I’ll invite him to comment on why he made his map, and in this case, how! That may well be a post of its own, since lessons in CC3 are independently valuable!

Of course, we can’t leave out the actual author of the campaign, +Jason Packer . He has been working on his own map, of course! His campaign will be called The Taming of the Eastlands, and you can follow his progress in campaign design over at RPGSnob. Maybe I’ll sign up to play!