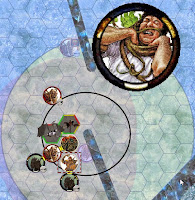 We picked up in the middle of combat, facing what looked to be one frost wight (the second died real quick in the first moment of the restarted game), and two “Scary Black Things,” which had proved to be very robust to damage, presumably very high DR.

Shiba goes after the frost wraith, and severs its good arm.

Cadmus is still buffed from his Righteous Fury (ST 19, DX 17, IQ 12, HT 18) and launches a complicated two-blow attack, one on each Scary Black Thing. He hits both in the neck for 13(2) and 18(2) damage, and both SBTs are alive, angry, but less alive than they were before getting Shrivener to the neck. 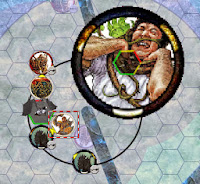 The moonflower comes up behind us, finally, still on fire from our initial assault. But he’s close enough to grapple Staver. GM: t’s main mouth yawns wide and descends over the top of Staver from behind result:  «succeeded by 7 »  Staver, you are grappled and inside it’s mouth.
Shiba: Well, crap.

By “grappled” he means “swallowed,” and he also suffers 4 corrosive acid damage as well as 6 piercing “ow, spiky bits in it’s mouth” damage.

Shiba hears a heavy thud from somewhere to the northwest, and Thumvar is surprised from behind by a blow that no one, not even his friends, see coming.

GM: Something heavy but somewhat… giving slams into your side, Thumvar. You don’t know, something just hit you in the side out of the blue. Your right flank. It does 9 cr, and Thumvar is forced to make a HT check.

Something tickles his nose, and he sneezes.

Thumvar has DR 14 or so, so nothing penetrates.

Now Staver’s turn. He loses the Contest of ST to break free by more than 40. Yow.

The SBTs change posture to kneeling, which is as as far as they get. Staver recalls he has a Salamander Amulate, and has DR 11 or so. Next turn, will open a vial of alchemist’s fire inside the plant.

Thumvar turns to strike SBT2, but sees . . . something.

Thumvar throws one of his patented Dual-Weapon Attacks, at -6 for transparency, and spends a Knight! point to hit with the sword.  The outline does not respond to his attack, but something heavy yet soft deflects the blow out of the way. We’re being attacked by some sort of ambulatory mushroom. Must be trippin’.

The plant fails to twist out of the way. The blade bites deep through the distended plant skin, skips off some sort of armor inside, and Staver comes tumbling out.
Staver rolls Scout!, and sticks the landing. Ta-dah!
Cadmus strikes twice hard at the beast before him, once at the neck and once at his remaining uncrippled leg, but is parried both times.
The Moonflower slides forward, upset at losing a meal, and pieces of the root structure lash out, trying to entangle Shiba and Staver.
Shiba retreats and ripostes, and dodges, succeeding by lots. Staver critically succeeds on an acrobatics/Scout! roll, bouncing around like a tree elf. She dodges both handily as well.
Staver beats feet (hooves) to the edge of the grease, where she spins, stumbles, regains her balance (scout! point), and looses two flaming arrows at the SBT2. Both SBT1 and the Moonflower continue to suffer from the effects of alchemist’s fire, SBT1 looking at 2(5) and 2(5), while the moonflower is staring at 6(5) twice as well. She also crits with one of the arrows, and both hit. The first arrow hits solidly, and causes the SBT2 to fall over, but alas, not stunned.
SBT1 attacks Cadmus four times with his limbs from the flank, and while Cadmus blocks one, and dodges two more, one gets through for 14 cut, which puts 3 injury past his DR 12. 3 corrosive damage also splatters on his armor, and smokes. Further, SBT2 swipes at him prone, but Cadmus critically succeeds on the first parry (which also had a -3 to Riposte baked in), and also parry the second. He loses his balance, not able to take any action and a further -2 to defenses until his next turn.
Thumvar steps to the plate, and fires off a Dual-Weapon attack. Both hit, but his dice hate him, and he only does 11(2) and 13(2) cut. Even so, the first blow bites into it’s carapace, and the second blow with the razor sharp edge of your shield severs it’s upper torso from the rest of it’s body.
It shudders and is still. 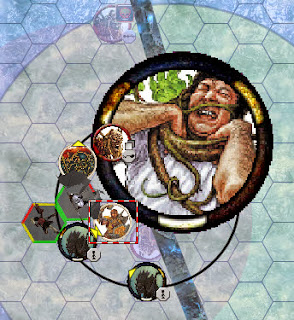 Cadmus moves away from the Moonflower, and attacks the Scary Black Thing with a blow to the torso and the neck. Spending his only two Holy Warrior! points to turn two narrow misses into two narrow hits (due to the -3 shock penalty from last turn). The 12(2) cut to the neck removes the head of the Scary Black Thing. We are now down to one Frost Wight and Audrey Too.
The Moonflower emits another flashbulb burst. This was the reason Cadmus put his +6 into HT and not DX, and he succeeds. Shiba spends a destiny point to be able to see, as does Thumvar. Staver is blinded.
It grapples at Shiba, and misses. And something heavy and squishy slams into Staver’s legs, for 7 cr each. Plus two HT-2 rolls. Fungus critter. Staver takes mild injury, and fails one of the HT rolls.

GM: Staver, in the hex to the south of you the outline of some sort of mushroom has appeared, prone. Also, you feel a sudden burn along every inch of exposed skin. It feels like something tiny and cold is trying to burrow into you. Moderate Pain: Pain: You have a penalty to all DX, IQ, skill, and self-control rolls. This is -2 for Moderate Pain, -4 for Severe Pain, and -6 for Terrible Pain. High Pain Threshold halves these penalties; Low Pain Threshold doubles them.

She nails the hex for 2(5) and 5(5) burning damage, the ‘shroom fails to dodge, and suddenly she has no trouble seeing it as it bursts into flame.

Thumvar throws two blows at the Moonflower, both of which are parried. The moonflower continues to burn/smolder a bit, and Shiba keeps slashing at the Moonflower. He hits, and the GM notes we’re basically about to kill all the baddies, and shall we end the fight here?

The lower level, previously filled with the clash of arms, cries of battle, and crackle of flame, quiet once more.
We heal up a bit, but small white growths are appearing from below Staver’s skin. Peering at them, they look suspiciously like the arctic adapted mushrooms from the other room.
Cadmus wanders over to the glowing thing, makes an IQ roll, and I’m pretty sure it’s some sort of arcane control panel, pulsing steadily with some sort of black-tinged light. 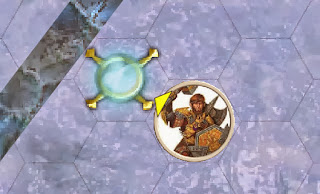 Cadmus wonders if it’s evil, and in doing so, invokes Smite. Cadmus gets a funny look on his face and fingers his holy symbol.
The panel explodes, doing 17 burn explosive damage, throwing Cadmus back two hexes, and injuring him through the armor.

Cadmus: Pretty sure that control panel was powered by evil.

And now it’s a smoking hole in the ice.

Fortunately, there’s another one on the other side of the central shaft. Cadmus does not try to Smite this one.

GM: I won’t make you fiddle with it and guess the function of stuff. With an hour to mess around, you figure out that you can manipulate the panel to produce a shimmering hexagonal floor in hte central chamber that waits for about 10 seconds, shoots upwards to what looks like the next floor, and then disappears after another several seconds at the upper level.

Cadmus and Thumvar decide to test the elevator ride.

GM: Okay, so Thumvar works the levers, tongue sticking out the corner of his mouth, and then Thumvar and Cadmus run onto the shimmering floor. It shoots upward.

GM: The acceleration on this thing is pretty intense. You travel about 30 yards in about three seconds.

GM: The wind buffets you mightily on the way up, and the floor slides to a sudden stop. You are in the next section up of the hexagonal tower. Most of it is open, but there are walls sectioning off the northern quadrant of this level. Also, oddly the ice looks damaged here. The floor and walls have deep grooves, and large holes in them, though they don’t penetrate to the outside of the tower.

GM: Both of you know you want to get off the floor pretty quickly.

We wander around, and discover what can only be evidence that a rhemorraz lives here. What is that? A gigantic centipede full of volcanic fire. Eats mammoths, melts steel. Very very fast.

We really need to get off this level.

GM: So, wormeated floor and walls. Room to the north with door and mysterious panel. Other panel near the shaft.

Shiba fiddles with yet another control panel, and determines how to open the giant door. He “pushes the button,” and then . . .

There’s a delicate chime, and six traingular sections of the door seperate cleanly and withdraw into the sides of the hexagonal door. It’s a room full of crystals. All pulsing slowly. Importantly, they seem to be valuable crystals. Also, everything is coated in a thin layer of dust, and the air smells stale. There are a couple of magical ones, and a few mundane ones. The room looks like the panels you’ve been messing with, but floor to ceiling.And there is some sort of pattern to the flashes that are rippling through the crystals. You’re pretty sure this entire room is some sort of functional device, but you’re not sure what kind.

Cadmus asks if he should invoke Smite in here. Sarcastically.