So, I made a small error in my original sheet yesterday, but I’ve replaced it with the right math. I also upgraded the sheet to show the relative delta in absolute percentages from any given choice to the best choice for that defender.

That’s what led me to conclude, basically, that there really is an answer to the question of “what’s the optimum deceptive attack” strategy. There’s one caveat, though, which I’ll throw out in the beginning as a clause.

Provided you don’t know the defensive skill of your foe, the best strategy overall is to Deceptive Attack with “surplus” skill down to a level of 16.


What is “surplus” skill? Well, like mentioned in A Surplus of Awesome, you can hit important stuff, target limbs, Rapid Strike, and other things. Once you’re done that, it’s time for Deceptive Attack.


My original calculation was

This was a mistake. This does reduce to

What this should really be is the probability of a crit, plus the probability that a non-critical hit strikes home. That should be [P(Hit) – P(Crit)], since (1-P(Crit)) includes misses as well.

So in my formulation, I’m subtracting a smaller number from the total, by the amount of P(Hit) times the last term in the maroon equations. That will be a small reduction for large skill (where P(Hit) is close to 1), but can get significant at low skill.

In any case, it’s fixed now, so the numbers should be basically right.

I’m not going to focus on the actual percent chances to hit much, but I’ll give some examples of the charts. 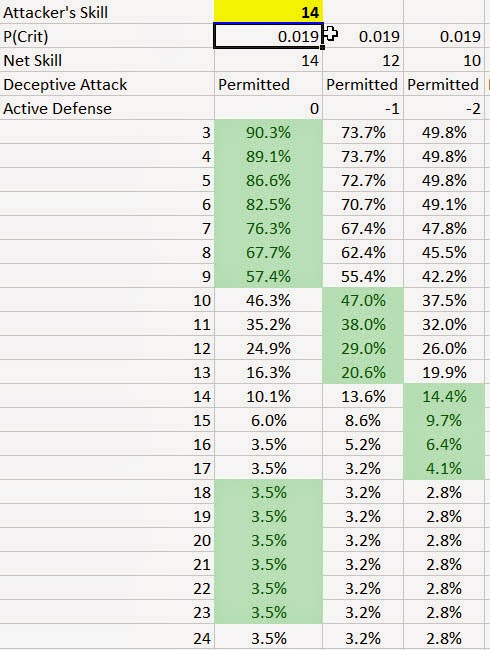 Based on the “pure” answer of what’s the best choice for any given defense, you can see there’s no one best answer. The odds of getting a hit in at all depend on how much skill your defender has.

If you know what that is, of course.

If you’re fighting yourself, let’s say with stats in the 10-12 range, you’re probably looking at a base Dodge of 8 to 9. That could be as low as 6 (due to Committed Attack’s -2 to Defenses) or up to 12 or 13 (Combat Reflexes and a Retreat). Parry will start at about 10, and with a medium shield, Combat Reflexes, and a retreat can be up to 14, but as low as 8. So defenses will be from a low of about 6 to a high of 14 . . . and that’s on one foe. His maneuver choice means his actual effective defense can change turn to turn as well.

Let’s look at the relative matrix. I’ve color coded the differences, taken in absolute terms from the optimal choice. Green is less than a 5% difference between the cell in question and the “best” cell for that row, and red is larger than a 20% difference. 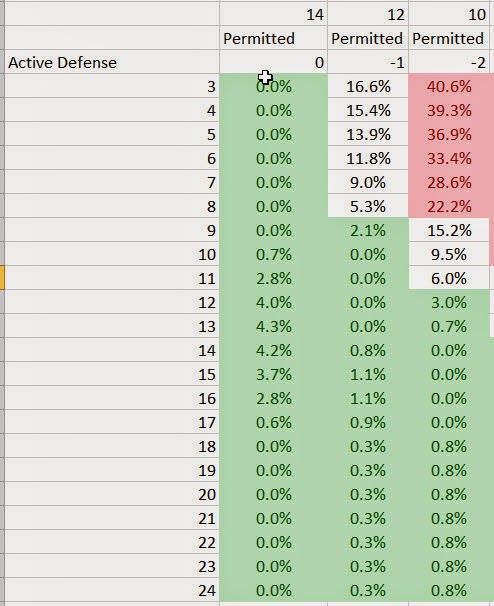 What you see here is a bit differently put. While the very best choice changes a bit, you can see that it can be an actively bad idea to do heavy Deceptive Attack vs. inferior foes. In fact, vs. Joe Average and his Dodge-8 and likely Parry-8 (Weapon skill at DX 10), you are worse off than optimal (which is no DA at all) one time in 4-5 tries.

Shooting down to 12 isn’t a bad choice either here, though again it’s not optimal against very bad or very good foes.

Still, the surprise here is that if you’re not fighting a total incompetent, you will not be overly penalized in total hit chances by any level of DA that you can throw, but by and large either 14 or 12 are your best choices.

You can get to this by math, too: take the average deviation of all the potential trials listed. The lowest deviation is no DA for skill 14 and 15. Now, that heavily weights Defense 17+, which is “fishing for critical hits and defensive critical misses” territory, but it does it equally, so I’ll call it indicative. 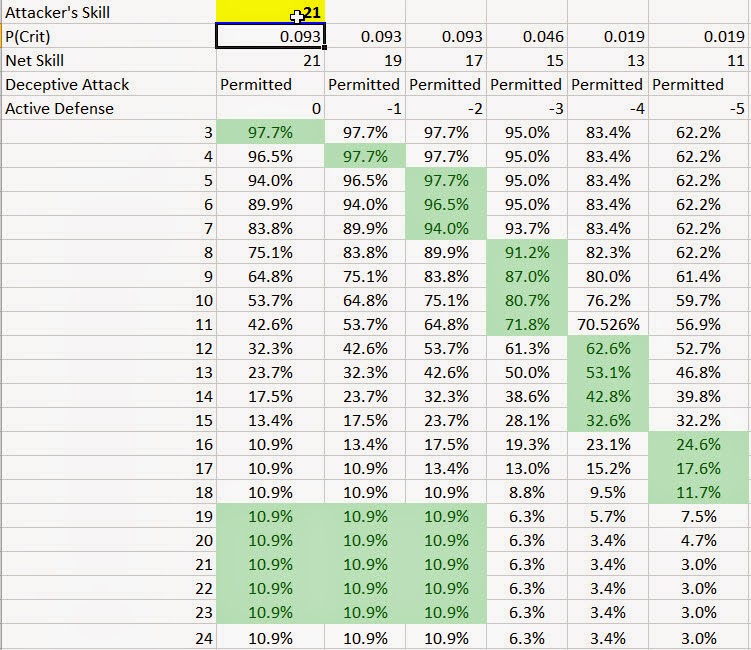 This skill level is good but not the top you can get to in a starting DF character if you optimize a bit, and not even close to the top if you’re into Monster Hunters or (god forbid) Black Ops.

You can see from a pure math perspective that which is the “best” strategy changes quite a bit depending on your foe’s skill.

Anything from no DA to the most DA you can throw is viable at some point in the spectrum, and someone with Skill-21 has a base Parry-13, likely with CR, maybe some enhanced defenses as well, perhaps enchanted armor? Parry 17 is not out of the question here, but that’s still not completely in the “crit fishing” range. Still, what about if you don’t know your foe’s defenses? 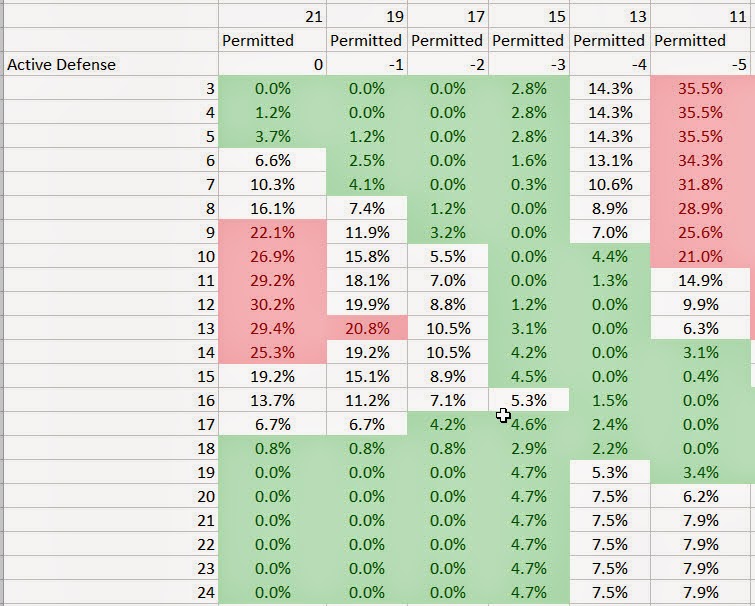 The situation here becomes cooler, in a way, with regimes of “it’s stupid NOT to Deceptive attack” as well as “you’re DAing too much, silly man.”

DAing down to 15 is either optimal or within 5% of optimal i the largest range of circumstances. Lacking other information, it’s the best option in many cases, and a pretty good option in nearly all cases.

Even the one cell that’s not green is only “not green” by 0.3%. Going down to 13 gets you very little, and only against a select few foes. Choosing 17 against middle-ground foes is actually a poorer choice, but it’s good against those of much less or much more defensive ability.

Now a Bunch of Tables with Few Comments.


Rather than comment on each, I present Skill 16 through Skill 22 counting by 2, then jump to Skill-30.

0.00% means that’s the best result you can get for that row.

In all cases, the average result is best to DA down to 16. There are areas where DAing down to other values are locally best, but you have to know your foe’s defenses precisely in order to get this result in many cases. Since even lousy foes can be lower in active defenses by 2 without actively giving them up (Committed Attack, being grappled by RAW, being in several postures, even -3 for lying down, -4 for stunned) and can eke out +3 for retreating Dodge, and with the right mundane advantages and equipment can pretty easily hit +4 to Parry, you’re really dealing with a range of defenses on any given foe that’s around 5-8 wide. So Defense-10 can vary between Defense-6 and Defense-14, though honestly it’s really smaller than that unless you’re dodging, at least on the high end. 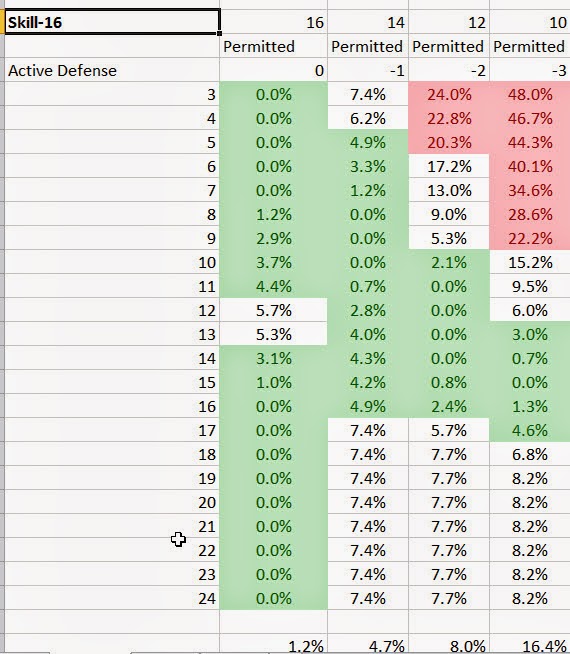 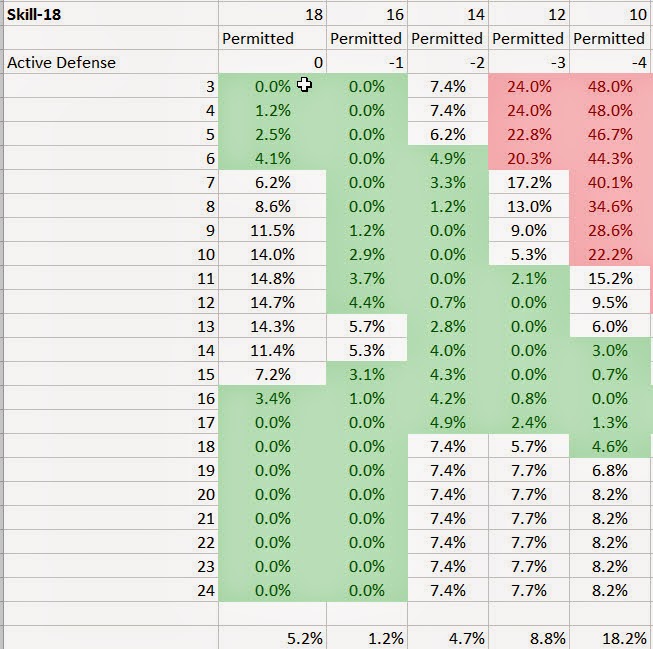 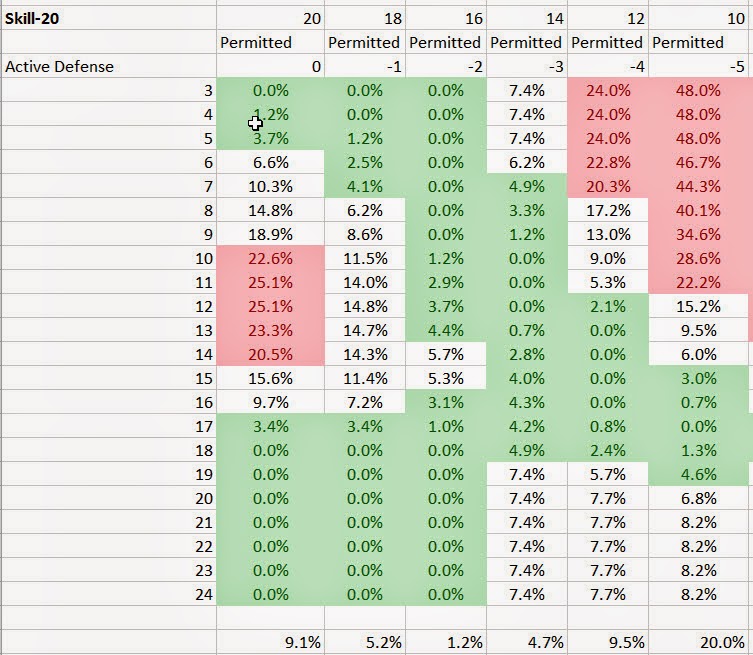 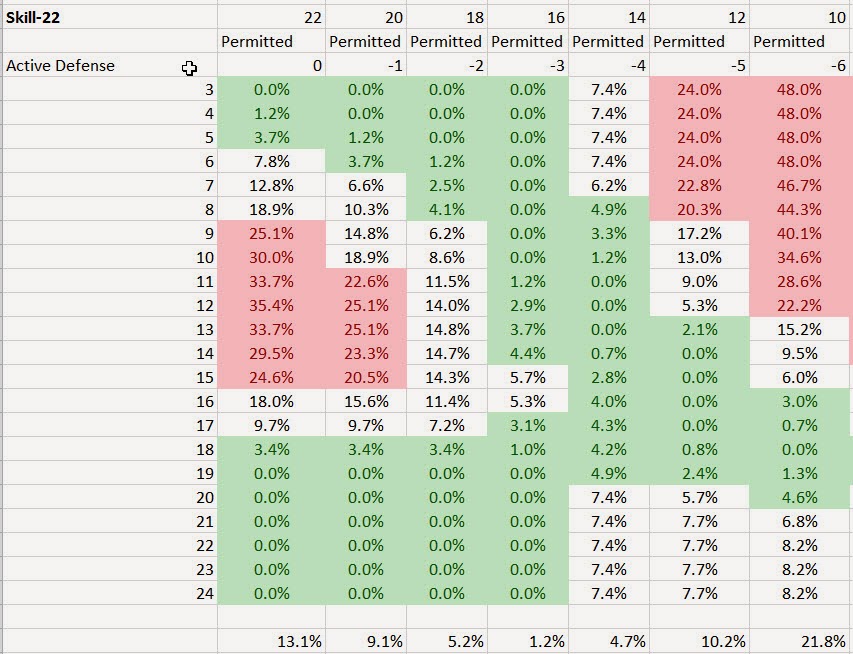 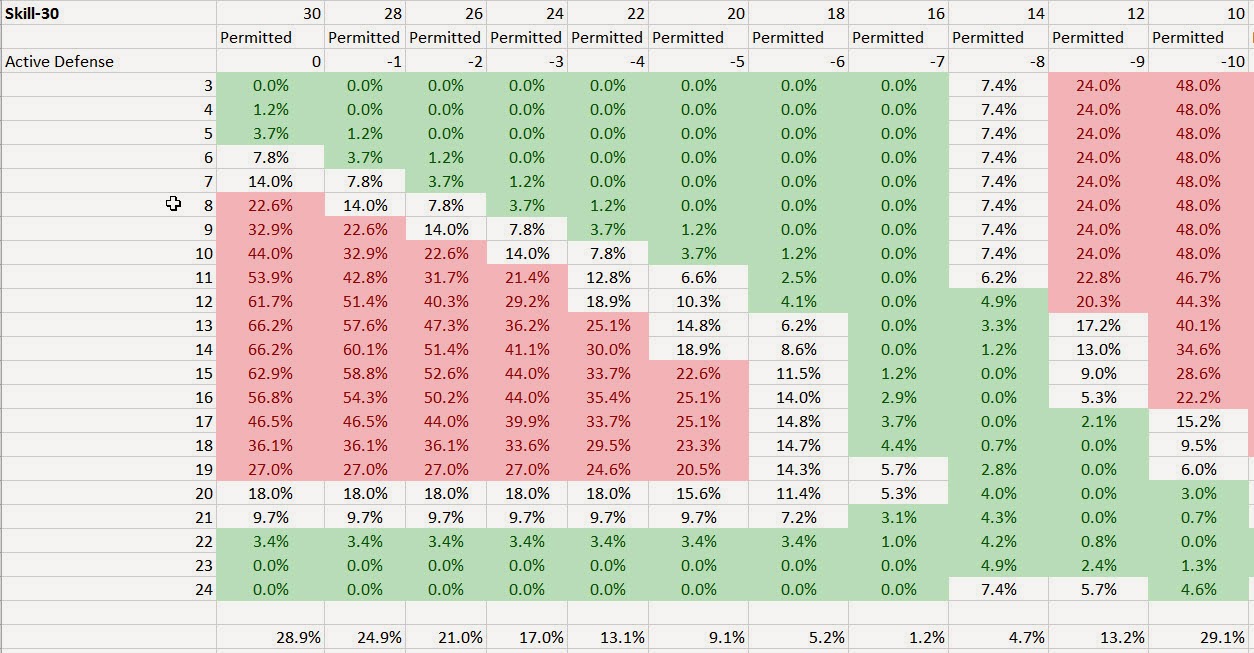 There are limited ranges where more DA than the 16 global best average answer are appropriate (and by the way, if your net skill happens to be odd, you want 15, not 17). If your foe is sporting a defense value of 7 + half your skill, you maximize your chances by going all the way down to 10. (You of course, give up increased chances of critical hitting, and increase your chances of missing entirely). But in every case, your odds have been increased by . . . 1%. You will take advantage of that extra optimal hit chance one blow in 100.

Note that in an equal battle . . . this is where your foes will be. Parry starts at 11 with Skill-16, and with a retreat, combat reflexes, or just a medium shield you’re in the “go down to 12” category. So if you’re willing to give up crits and you’re fighting a foe basically as skilled as you are, this is your target. However, this will only make a difference about one time in 16 relative to the critical effects you give up by doing this from Skill-16.

If your foe is half your skill, DA down to 14. But again, you’re looking at this making a difference from between one time in 25 to about one time in 50.

If your foe’s defenses are equal to your skill, buy down to 16 and no further. You’re crit fishing here, and buying down is actively bad. If your foe’s defenses are even one less than half your skill, again, stay at 16 – the biggest impact to your hit chances here is your own lowering of your base chance to hit. They’re so hopeless that them making a defense roll will be an active surprise.

But as the graphs show, all of this is at the margin. +Peter V. Dell’Orto summarizes some of the benefits and pains of maximizing critical hits and minimizing critical misses in one of his posts on the thread that spawned all these charts. Those can be inflection points in fights, and so they’re more important than raw “did I hit him with this particular blow” might show!

What the heck? Why do all this?

Honestly, my curiosity got piqued. Peter’s been playing DF for years, and literally wrote the book, along with +Sean Punch, on Martial Arts. I’ve heard varying opinions on this issue from lots of people, and even some charts, but nothing quite as comprehensive (or iterative) as I did here. I thought the color coding of marginal benefit was illustrative.
And they key, as always, is knowledge. If you know your foe’s defenses and the only goal is maximum chance of hitting per blow, there probably is a numerically best answer. But a few things did surprise me.
The easy answer to “what to do with skill less than 16” is “nothing.” Swing away, but don’t waste time on DA. Note that’s NET skill. If you have Skill-14, but win a Feint in a duel and then have to attack a superior foe . . . you might well want to DA to 14 or 12 on top of a Committed Attack.
But Deceptive Attack is what you do when you’re awesome, either permanently or temporarily.

5 thoughts on “Deceptive Attack – Final Thoughts (this time around)”