The Reloading Press is an approximately fortnightly (every other week) feature here on Gaming Ballistic that started in 2016. Each article looks at some interesting real-world cartridges and presents them with hopefully-useful information in GURPS format. Except when it’s interrupted by massive writing projects, something interesting should appear every couple of weeks.

The 6x35mm KAC seems to be another reaction to the desire to give folks a short, handy shoulder arm that hits harder than a pistol against what I’ll call “firm” targets. They’re not “soft” targets (unarmored folks in light clothing), nor are they armored behind real cover or wearing Class III or IV level protection. They’ve got soft body armor or clothing thick enough to pose an issue against handguns, or are behind fragile but hard window glass that provides a measure of barrier protection, if a permeable kind.

There’s a lot of information about this round that seems to be classified. It was designed, seemingly, because when you take a round designed to perform well out of a 500mm barrel (the 5.56x45mm) and then chop said barrel down to 200mm, surprise-surprise you get issues. Low muzzle velocity and a fireball and concussion that likely rivals Thor getting frisky with Mjolnir.

So Knight’s Armaments Corp was contracted (or just decided and then got a contract, but I think the design was solicited) to do essentially what I did with the ultra-tech bullet design: take the bullet and the gun and design it all to a purpose: fire something fairly lethal out of a very short rifle. 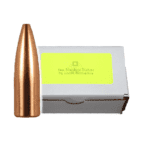 The base cartridge is the .221 fireball, which is a short (oddly enough, 35mm) cartridge stressed to rifle-like pressures of 52,000psi. The projectile is a 65-gr 6mm bullet that seems to have, perhaps, about a 3:1 aspect ratio. Maybe a bit more.

That, plus the knowledge that the round should emerge from a 10.5″ barrel at 2450fps and hit about 1500fps at 290m should allow us to take a decent shot at simulating the round.

The inputs are as follows, selecting a 266.7mm barrel, max allowable pressure, and tweaking the aspect ratio to get roughly the right velocity at 300m (just shy of 1500fps based on the testing done here).

There’s really very few weapons that use this, but let’s see what the table says. We’ll go from a 5″ pistol-length barrel to no more than a 20″ rifle barrel. The projectile is said to be optimized for the range of 250mm barrel, which usually means extra barrel won’t give you much more velocity, as the friction slows it down more than the gas pushes it. I’m not convinced that with such a high pressure that will be operative, and the model definitely won’t show that. Still . . . let’s see what happens.

The first thing that we see here is that, well, considering the standard (old bullet, not the new one) M855 round has only slightly more pressure (55,000psi), weighs slightly less (62gr vs 65gr), and has a large diameter, that lacking detailed real-world ballistic information, and actual design pressure, the two rounds should perform about the same within the resolution of my model.

So really, within this model, there’s no gain to be had by the numbers to moving to this projectile/weapon combo. That conclusion seems to be echoed in the testing data linked to at The Firearm Blog as well. Is is possible my model misses things? Absolutely – more than possible, it’s guaranteed.

One thing that is missing is that a higher pressure, shorter burn will produce less muzzle flash. The reports of much less recoil with the KAC round simply must be due to either weapon design (which could be ported over to a new design for the M4) or a reduced powder charge, because based on my guesses here, the pressure x burn length x barrel length math works out to be both the same results, more or less, and the reported felt recoil reduction almost can’t be based on the mere 200fps reduction in muzzle velocity going from M855 down to 6x35mm.

There can be only one. It’s proprietary to Knights Armaments Corporation, and it’s fired out of their PDW, which (by design) looks and feels like an M4 to enable the manual of arms and physical memory to transfer without retraining.