So, my daughter is in a small school that does very interactive history studies. So last time, they did Ancient Egypt, and made canopic jars, faux jewelry for the pharaohs, etc.

This time, they’re doing Ancient Greece, and since she’s a huge Wonder Woman fan, and a big fan of costumes in general, I thought I’d try my hand at kitting her out with some pseudo-authentic ancient greek armor, but done up in a way that is a bit of a mix between historical pieces, film pieces, and of course, Wonder Woman.

Back at Christmastime this past December the visiting cousins were using some cardboard as shields to play games at grandma’s house. Box top, that sort of thing. My girl went without during the day, so naturally, with our home full of cardboard from Amazon, I decided to make her a shield. But rather than a heater or kite shield, I decided to go different, and whipped up a shoulder-to-shin Trojan-style shield. 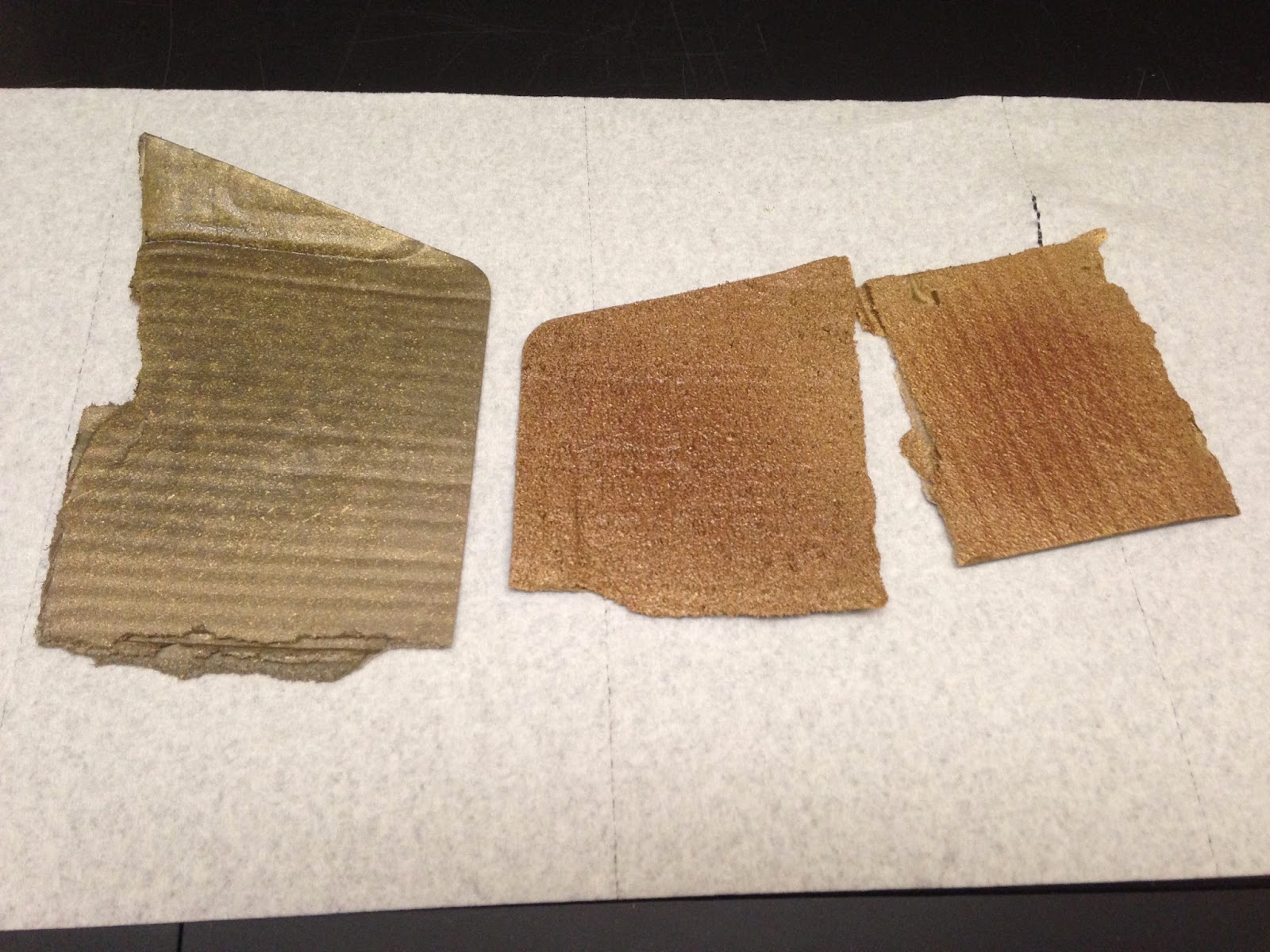 The results were good. But as I was thinking about costumes, and with her admonition that proper armor should be “gold,” I thought I could do better.

I tried a few different tests, with gold and bronze, a weathered/oil-rubbed look, and then for fun, I tried spraying the cardboard with adhesive, then sprinkling sand on that. The sand stuck to the glue as it should, and then I painted the entire thing. 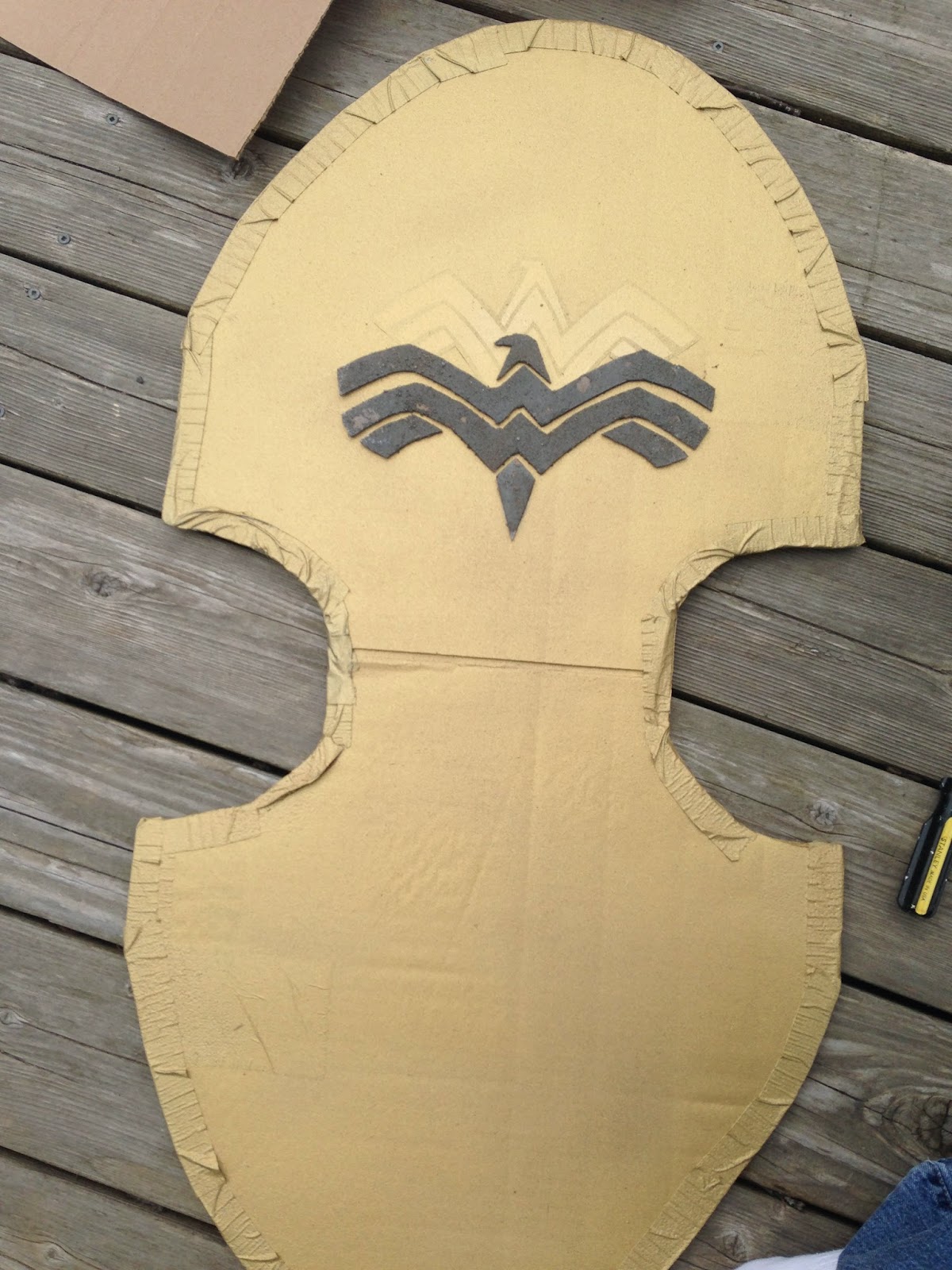 The look was nice – roughened and almost stone-like, with a great texture to it. The color was good with the raw bronze, too. Very antiqued, even pitted.

So I found a good looking Wonder Woman crest, in the form of an eagle with an embedded WW in it in a better version than the one I’d printed out a hard-copy of and glued to the face of the shield. My 5yo and I spend a good time tracing out each piece, to make a relief image, then we textured, sprayed, and glued away on the back deck.

The results were good, and bode well for the rest of the armor.I may wind up adding a bronzed, textured rim around the shield as well, as I think that wuld be a great accent to the eagle.

For the rest, first I ordered plenty of white sheet cardboard, 2’x3′, from OfficeMax. That was going to take a few days, though. No matter – I needed to figure out how the heck I was going to make a round helmet out of flat cardboard. The greaves, bracers, and even the torso armor could be faked together with basically flat pieces and some trimming. Some of the historical Greek armor – such as Hoplite armor of some types, seems really quite straight-forward, as it lays quite flat when not worn. 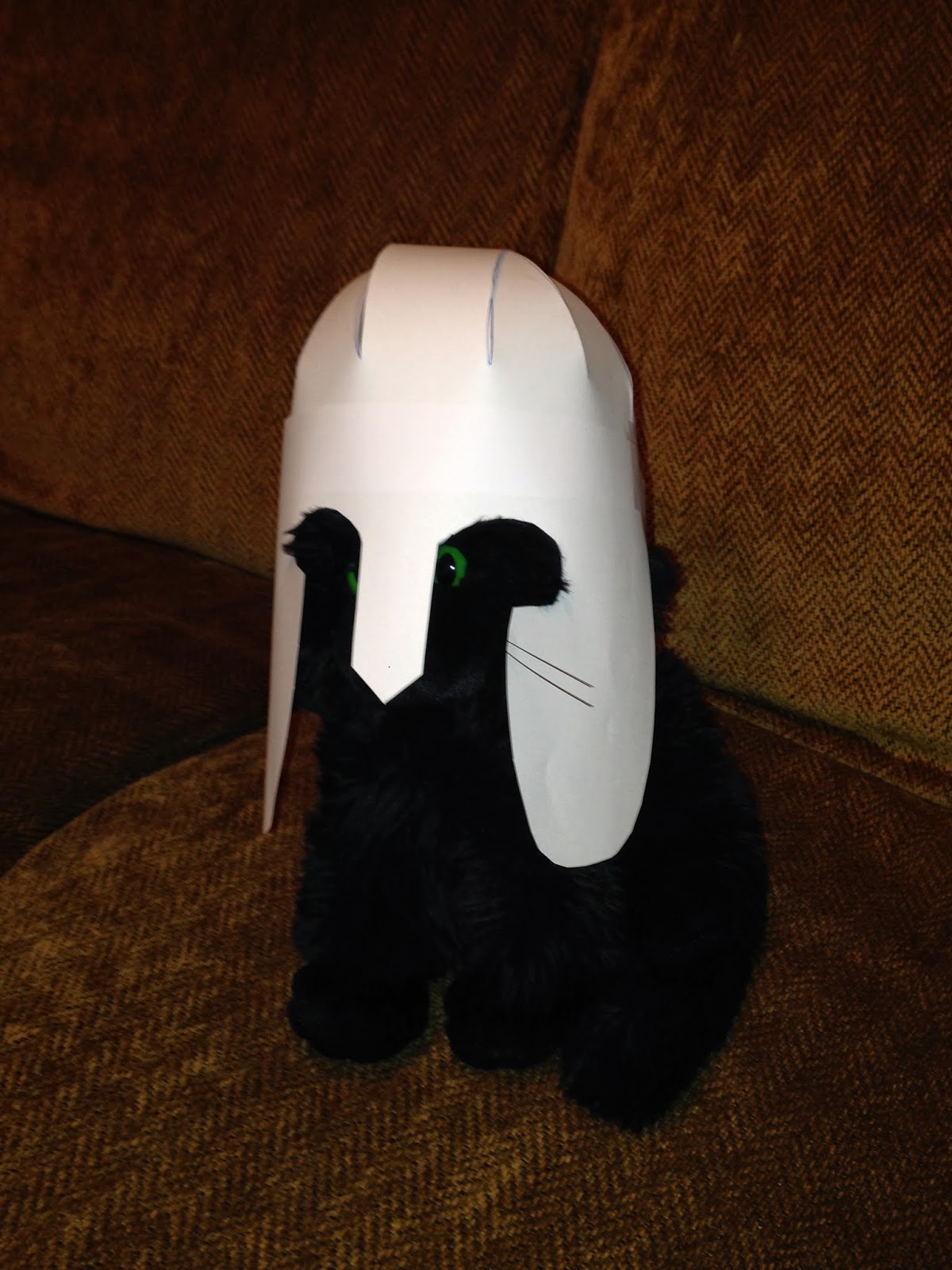 So the helmet is the hard part. I saw a video on how to make a metal Spartan helmet, and came away thinking that I had my work cut out for me, big time.

Still, I thought it should be doable, with a dome, a backpiece for the neck, and a faceplate that affixed simply to the dome,

So I started to work in paper, making a dome I knew to be flawed, but it was only to test the basic concept. The first attempt proved to me that I could do it, now it was just a matter of doing it “right.” 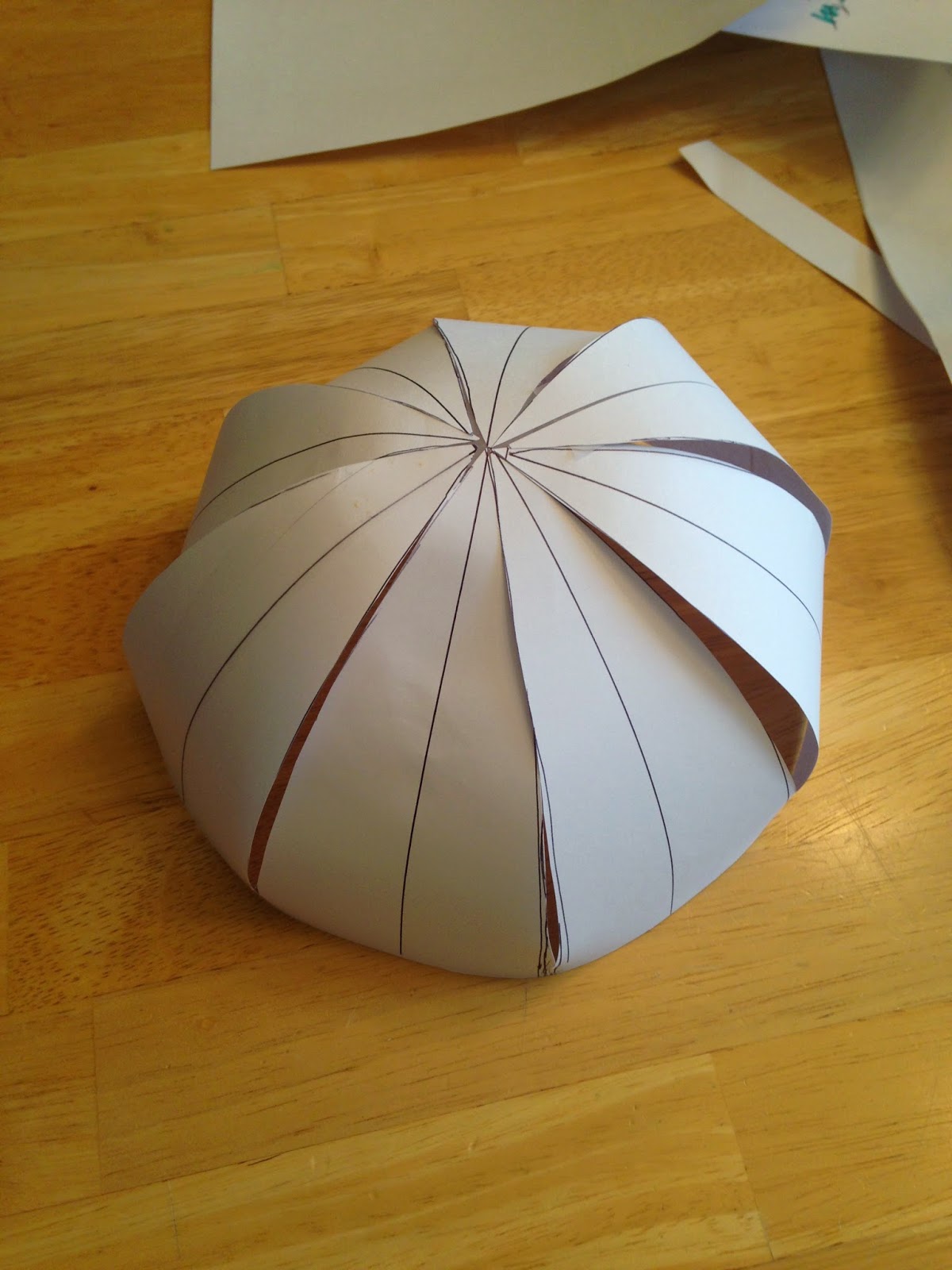 I’d have to work the dimensions of the face plate, but the back worked very well for what I had in mind. Felix the stuffed cat was well protected in his paper helm.

So then I did a bunch of work trying to figure out how to make proper “gores,” which is what the sections of a hemisphere are called when you pound them flat, out of an ellipsoid of revolution, which is to say, a head-shape that is not circular.

The second trial turned out OK, but I still wasn’t thrilled. The gore method, calculations aside, requires a lot more sophistication than I really wanted to provide. Sure, it sat well enough on short-stack’s head, but it just wasn’t going to be satisfying. 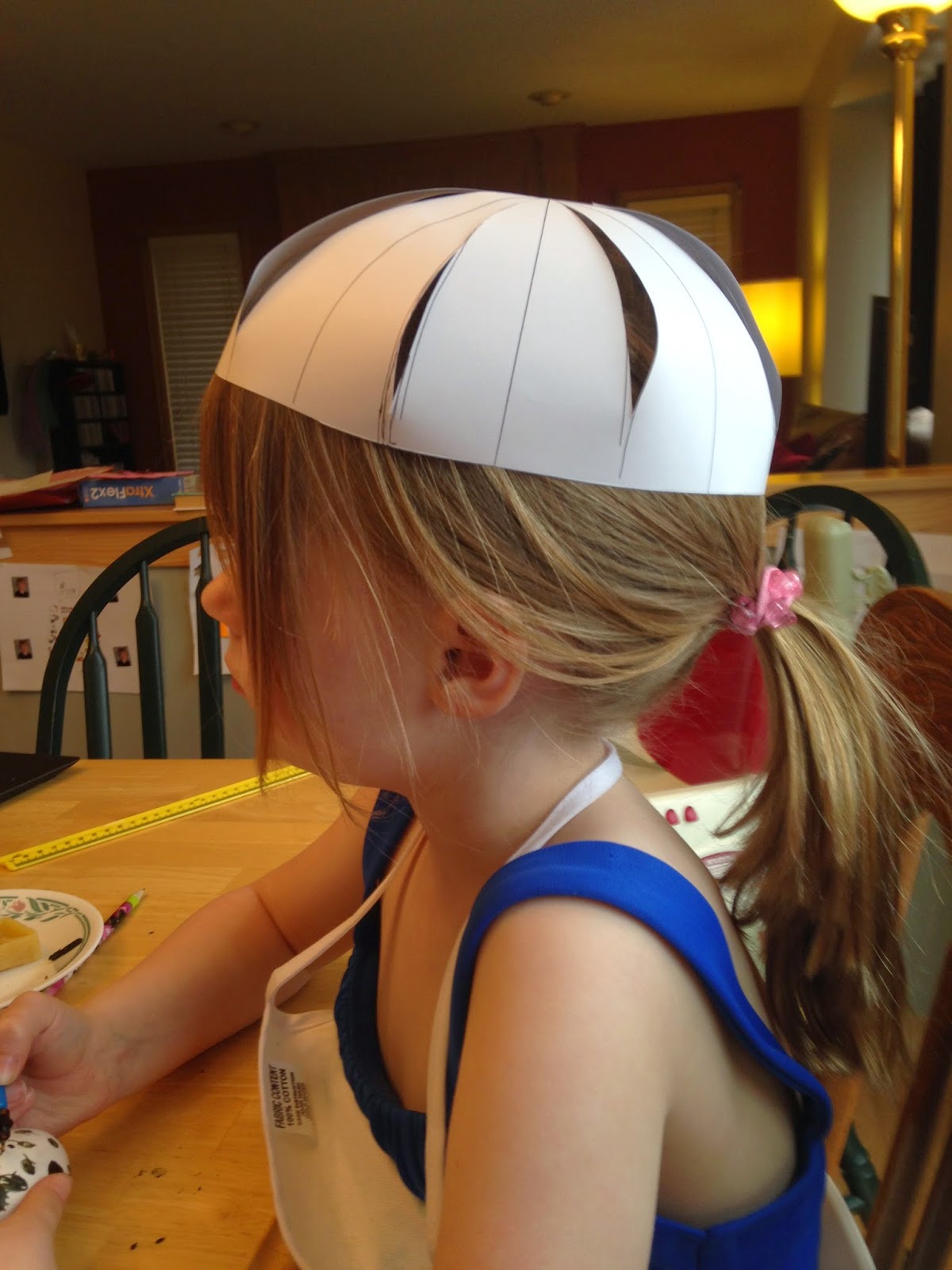 So I reverted back to empiricism. I used the same basic frame as my first paper mockup, a circlet around the head, and a basic support cross that was basically a one-inch-wide strip from front to back, and a similar strip from ear to ear, that joined on the top. That math was easy.

Then I had my selfless model (pacified with Easter candy) sit for me as I filled in the front quarter piece by piece, electing three pieces to do that. I replicated those three pieces three times, mirrored two of them, and then taped them all back together. The final template is nothing I’d have ever come up with through math, but it goes together well and will fit her perfectly.

I’m fairly sure it’ll scale up, too, you know, in case I ever need to do this for myself.

The  picture on the lower left shows the left side of the helmet complete, the right is the full template. Even though the cutouts don’t go all the way to the base strip (vertical band on the left), the slices need to, for the required flex.

When I make it out of cardboard, hopefully this coming week, I think the corrugations will run top to bottom on these pictures, so that the natural bend is more forgiving. I’ll probably do the faceplate in two layers, so it butts up against the inner dome, but also overlays it.

I will also, almost certainly, try and replicate that Wonder Woman eagle in relief on the helmet, as well. The eagle’s tail can ride down the nasal, the wings on the forehead, and the crest/eagle head won’t stick up too much. Gold helmet, bronze eagle? Should look pretty sharp. 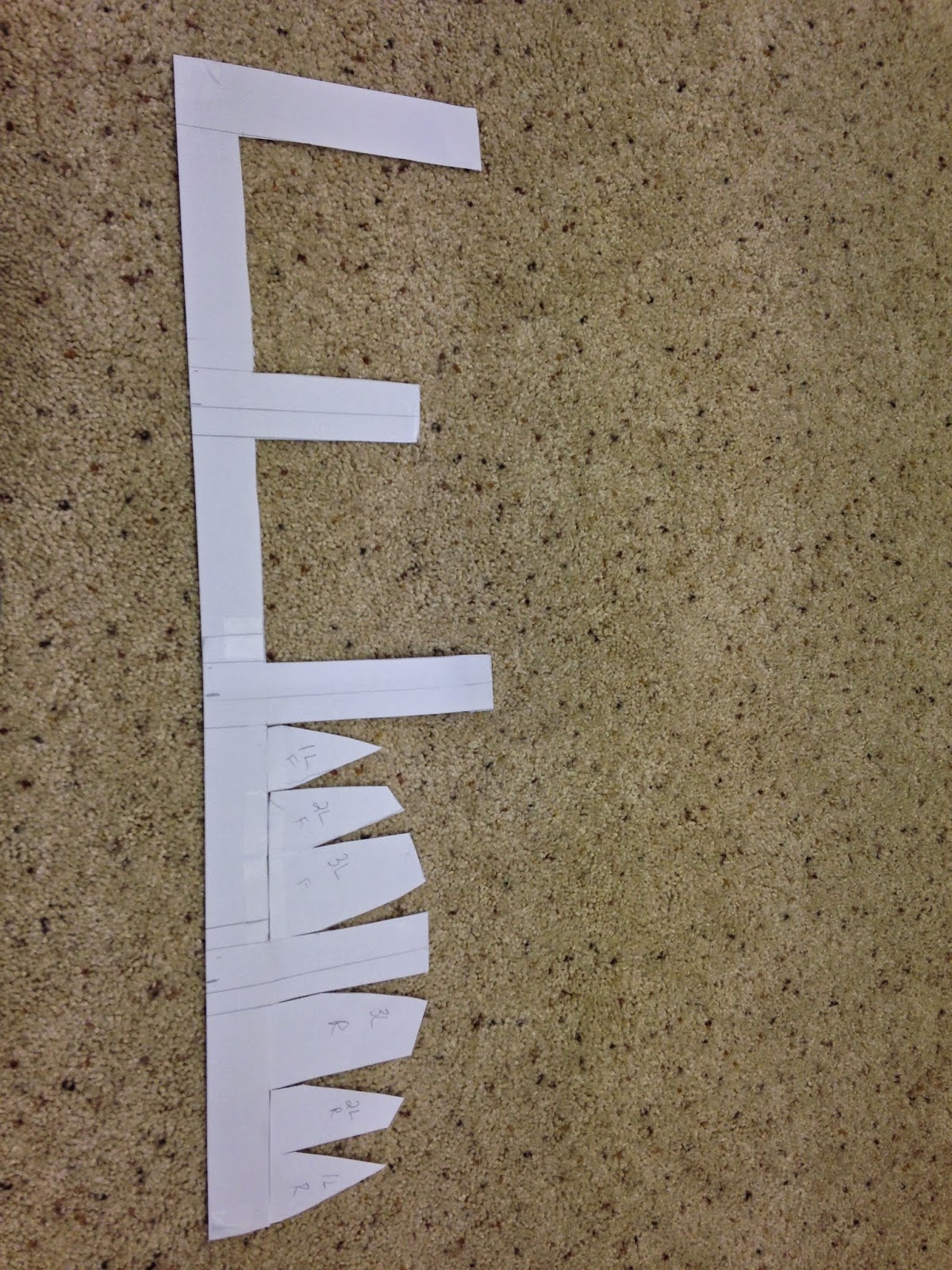 One thought on “Apropos of Nothing: Helmetfest 2015”