If you recall this past Minneapolis Wizard World Comic Con (2015), I took it upon myself to make my daughter a Wonder Woman costume, but as if she were an historical Greek rather than the usual outfit. So over cardboard 100 scales, three rolls or more of hockey tape, and several helmets later, we arrived at a really fun outfit.

Then her school had a Greek night as part of their history curriculum (I note that she’s 5 years old, and so she was learning Greek history, music, art, and mythology), and she wore it (briefly . . . not terribly practical) there.

During a school BBQ, I noted that for their Roman night, ha ha, maybe they should all get Roman armor.

They loved the idea.

So I said I’d see if it would be possible to make Lorica Segmentata for fifty or so kids. They would, of course, make it themselves, with help. The first thing was to see what I’d actually try and reproduce. I found several patterns available, but the Newstead pattern, the latest and final one before the Romans started to use mail (lorica hamata) again, preferentially.

The Newstead pattern uses fewer pieces, and is less complicated. Since I’m outfitting a bunch of kids ages 4 through 12 or so, less complicated is good. In fact, I knew I was going to have to simplify it even further.

So I found some images online. The Newstead pattern has six belly bands and lacks the complicated overlapping segmentation on the back of the armor. And I also found a fairly handy diagram.

As an aside, this diagram rather perfectly illustrates why armor, especially plate-centric armor, was probably referred to as harness. It’s really all about the straps.

Seriously – look at the diagram. The belly is basically a dozen pieces, that are held together by riveting the top of each segment to the strap. The belly pieces can thus slide past each other a bit, allowing the warrior to bend at the waist. Cleverly, the front overlaps so that the joint where the laces pull the belly together is stronger – double thick – than the rest. The shoulder pieces likewise are all about the straps.

But really, this looked somewhat doable. The hardest part, I thought, would be the hinging on the shoulder guards. Plus, I need to keep the cost of materials and overall complexity down. Not every parent is going to groove on helping/making armor for their child like I do.

The first thing I did was to break out my sheet stock cardboard, my 12″x12″ paper cutter, and take a few measurements on my daughter. I threw together a quick mock-up, trying out a few angles to see what would work.

The results were crude by design. And the angles were wrong. Interestingly, it was probably simpler to have no angles at all. Also, the top shoulder straps were too short, so the edges dug into her neck a bit. 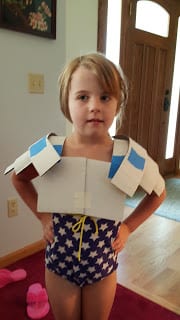 The second trial went much better, even though (or perhaps because) it was simpler. All squares. Recall that the Romans did this with sheet stock and hand tools as well, so simple was probably the order of the day (but not too simple. This was life and death stuff we were talking about here, and the ancient world was remarkably sophisticated in a lot of ways. Much more than we typically give credit for. But I digress.).

Seeing that the shoulder supports were going to go well, I went for broke and designed simpler strips – two feathers instead of four – and then the final hinged shoulder piece that would sit on top. I taped all that together with hockey tape and blue painters tape as a proxy for whatever. Then three rows for the belly, so six pieces total. “Permanently” fixed them together in the back, and just taped the top of each segment to the back lower part of the next one, simulating the layering one will get with actual straps.

Putting it on my daughter, I could not have been more pleased. She had full range of motion, it lay on her body well, and it looks the part.

Three bands instead of six, and three layers of shoulder plates instead of six worked out well. Permanently joining the belly and back together will wind up being the right call. 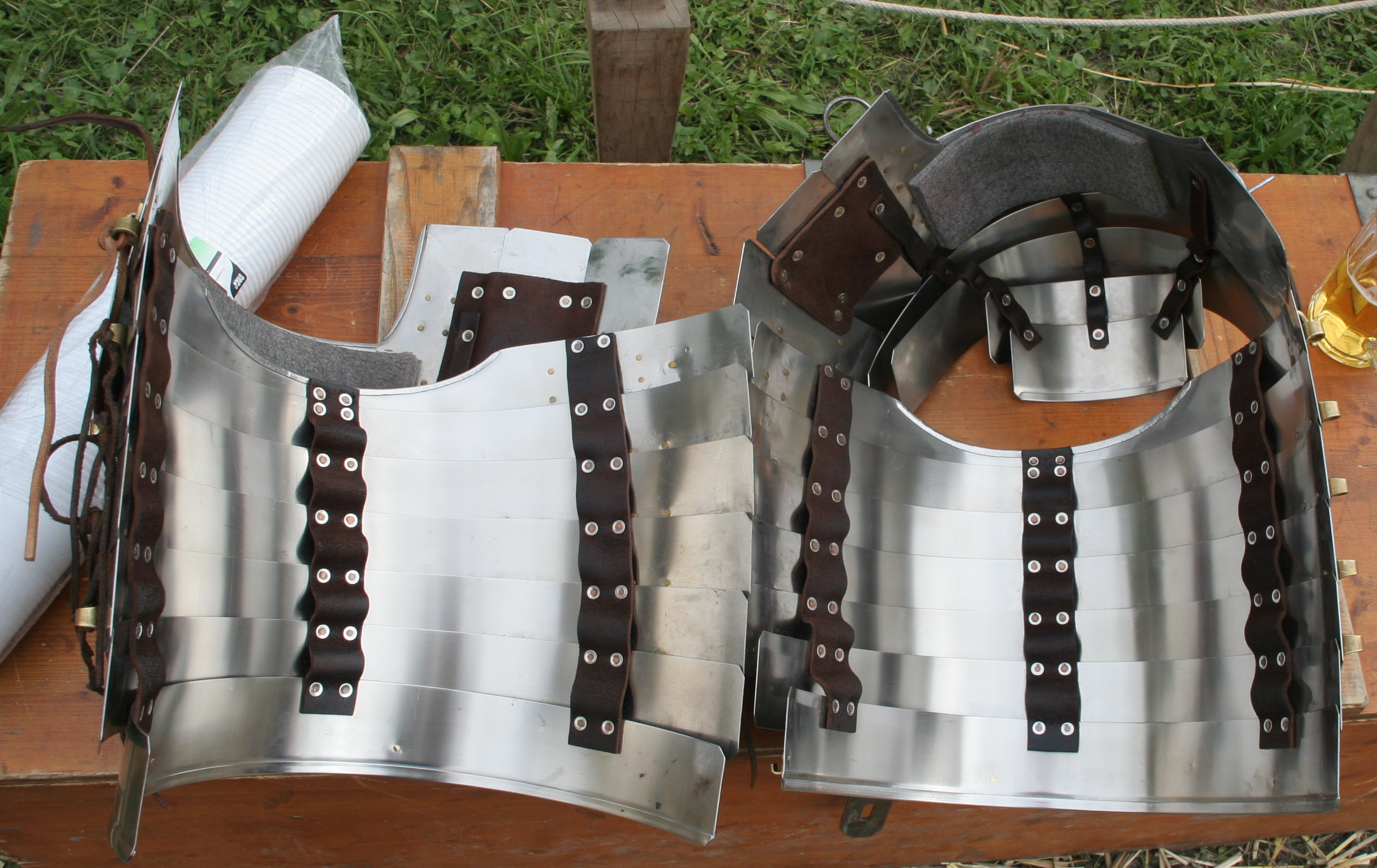 The real trick was going to be the fact that the cardboard bends easily along the corrugations, but it’s not going to hold its shape naturally, like the real stuff will. You can see that real lorica segmentata has a ton of permanent shape to it.

I was thinking about this, and in a moment of what I think might be extreme cleverness, I came up with the idea of threading a piece of clothes hangar wire through the corrugation. It slides in easily when straight (though my first trial started with it bent – mistake!) and then when you bend the strips, they hold their form as if they were metal or any other work-hardening material subject to permanent plastic deformation. So yay. Painted with hammered gold Krylon paint (gold becuase the bronze colored cap was on my gold paint can. Oops.) it looks pretty good.

The second issue was going to be the hinges. I’d need four of them, and again, they tended to be fairly elaborate on the real stuff. But again, in a moment of inspiration, I realized I could create nifty hinges with a piece of ribbon (the thick stuff you put around gifts) glued to the back of cardboard. That whole setup could then be glued to the armor segments, representing the proper hinging well, and much stronger and more permanent than tape (which tends to debond over time, especially in humidity).

The final issue will be attaching the belly bands to the torso guards. The real stuff uses pins or straps. I don’t yet have a final solution on this one . . . but honestly I’m tempted to simply go with brown velcro as first option.

Another option would be to use eyelet tape and affix it to the underside of the torso pieces, and then hook that around some sort of piece pushed through the belly band, and secured with a pin. This has the advantage of being pretty realistic, quite simple to do, and highly adjustable depending on what each student will be wearing, in a “one size fits most” kind of way.


Not much but pictures here. The next version will use all the tricks and see if it comes together quickly and with little fuss. I can start angling some of the panels and other refinements later. 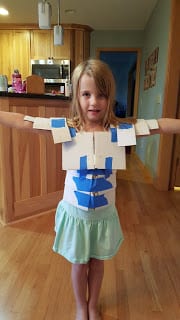 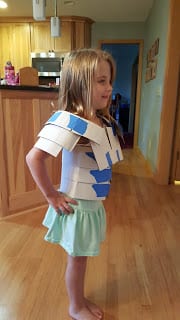 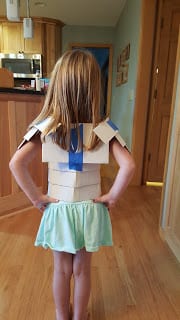 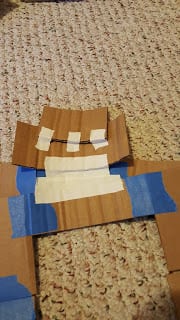 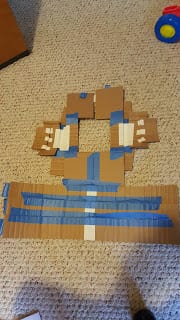 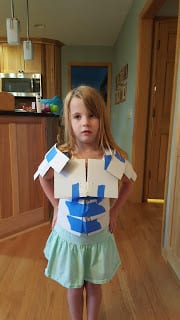 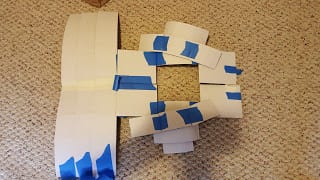 7 thoughts on “The Lorica Project – setup and trials”