This weekend was, in a word, good.

I did a triple-whammy. I finished a draft late Friday night that I thought – despite being bleary-eyed – was quite good. My readers confirmed it was the best version yet.
But the next day, one of my readers ran through a PFRPG fight with some purpose built grapple-monsters, both PCs and critters.
Whoa. Not good. The problem is that the source material – OSR D&D in various flavors – is fairly low in the HP department, and Dragon Heresy uses other stats to differentiate wounds from vigor, and control from vigor.
So converting over using HP to get to PFRPG or Fifth Edition? No. Does not work.
I real-timed it with Cole, and realized that at least for the moment, a new value for the grappling version of HP was needed. Came up with one, and that tested well. I knew it wasn’t quite right, and kept working while the playtest was going on. Found a good solution for all of the games treated, and realized (via math, backed up by 8 months of playtests) why Dragon Heresy not once had this problem.
Anyway, rewrote the drafts and got that into the hands of my layout and indexing guys. Wound up at 17,100 words, which (if we use the same layout template as Dragon Heresy) will turn into about 32 pages, which is right where I want to end up. That probably means about 16 – 20 pieces of art. We’ll see – it’s why I like to do a preliminary layout pass – to see where things need to go.
But once the fix was done, the feedback was:

We had an Orc wrestle a Badger to learn how this works. That was pretty straightforward and there’s no real notes from that.
Then we did a fight between some optimized grapplers at CR11-12: Vanaran Monk (Flowing Monk)/12 (PC wealth); Goblin Barbarian (Feral Gnasher)/12; Human Bloodrager (Blood Conduit)/12, and a baregara (http://www.d20pfsrd.com/bestiary/monster-listings/outsiders/baregara).
The demon won. Don’t grapple a grapple monster, that’s the lesson here.
Some things we noticed:

Overall we thought it was complicated but it probably would get easier with practice. The grabbed condition was positively received as is the idea of control in general as representative of the quality of the hold.

So some very productive notes and the basic concept works. The emergent behavior (monsters designed around grappling are dangerous to grapple) is as sensible as it should be – that’s important.
I have fixed the first thing already, and can add some more if we come up with good solutions for the second and third bullet points.

While some progress was made on monsters, the big thing that happened this week is I got sketches from both +Gennifer Bone and +Juan Ochoa for some initial art. This tells me my art direction did not completely sucketh, because I think I got about a 90% “I could use this” rate. Two needed some redirection, and I spent three hours on Hangouts with Juan – he likes to real-time things, and does his sketching on a tablet so we can work it into place together.
Only about 90minutes of that was work. 30 minutes was politics where two folks with fairly opposite points of view, from two different countries and cultures, were able to find common ground, thus proving social media is the worst possible discussion platform for such things. After that we talked about some novel business things that don’t bear mentioning.
But I could not be happier with the initial sketch-work. I have secured his permission to display some of the sketches (that wasn’t hard – we both benefit), and with that, here are a few samples of the 10 pieces reviewed today. 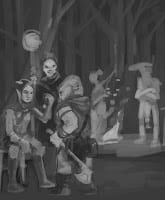 This is an image of a party of six adventurers. You can’t really see the halfling magically starting the fire, but he’s there. The rogue examining the pendant is a tiefling; she changed a bit during discussions, and the stool she’s sitting on changed because she has a tail, making the square, deep stool inappropriate for her physique. She got a three-legged folding camp stool. The others are a dwarf (front and left-center), a cleric or druid (with the illuminated staff), a dragonborn paladin (back right), and a human ranger (with the bow).
We tweaked out a few more things – made the tiefling more obviously a tiefling, added a treasure chest, and punched up the lighting. 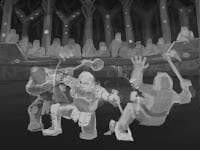 This one is to show a dwarvish right of passage. The lady dwarf in the center is one not yet admitted to adulthood (also true of her two foes). This is a magically-enhanced arena, with judges and onlookers. The female dwarf is hooking the leg of one foe, while parrying a blow from another. The weapons are enchanted to allow full strikes without full injury – kind of full-contact live blade sparring without the actual death part. We altered this one a bit to give more space to show off the arena floor, but mostly this will proceed to final version as-is. 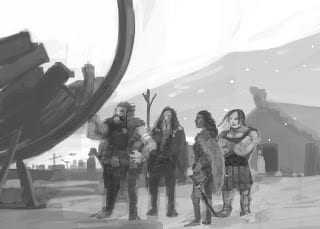 These guys are fixin’ to be iconic characters, as are the bunch from The Adventuring Party. These four are buying a ship. Well, the barbarian with love in his eyes is buying the ship. The druid is thinking that this is the most foolish errand he’s ever agreed to be a part of. The ranger with the fur is interested.
The lady in the back got some major tweaking. She’s a monk, an expert in the Way of Lausatok, a grappling-based martial art. She ripples with muscles, and her only concession to the snowfall that surrounds them is some woolen low socks under her combat sandals. Her body type is based on Julia Vins. She is just enjoying the hell out of how ridiculously giddy her friend the barbarian is over the skeleton of the ship.

This last image from The Book of Heroes shows a dragonborn using its breath weapon on some undead. The spear and the shield he’s carrying figure largely in a prior image. This one I saw being colored in a very, very fast initial pass, and you simply had to see it to understand how awesome this is going to be. 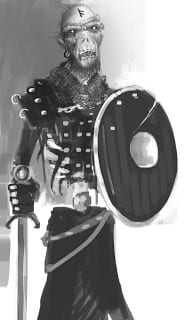 This is a very fast sketch he did of a Dragon Heresy Wight. The wights are cool, because they’re one of the most classically norse of the undead in Fifth Edition, and their new description and fluff text reinforces that.
The wight really took shape with our chatting. I can’t wait to see more of this guy. And The Book of Deeds has 170 monsters in it. Most of which could use this sort of loving treatment.
But I really like how this came together. How it’s  all coming together. I’ve got a background and world that is driving my descriptions and is inspiring the artists to add cool elements. While Dungeon Grappling is on my plate right now, I very much look forward to getting back to Dragon Heresy and making it real.